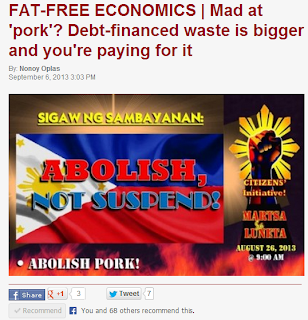 MANILA - The government is setting aside P330-plus billion a year in interest payment alone for our public debt, and many people are not angry with that huge transfer of money from average taxpayers to rich lenders. The people are angry (and rightly so) of the alleged P10 billion pork barrel scam.

Let us compare the numbers and see why public anger is disproportionate to the money that is siphoned off from their pockets.

At the heart of public anger and discontent over the Napoles pork barrel scam is the huge lump-sum money allocated to legislators in both the Senate and House every year. This is a separate item in the National Expenditure Program (NEP) and beyond the amount allotted to various national agencies, government owned or controlled corporations (GOCCs) and local government units (LGUs).

Note the big jump of legislators’ pork barrel from the Arroyo to the PNoy administrations, 2010 vs. 2011 PDAF fund.

The alleged P10 billion pork barrel fund that was coursed through Janet Lim-Napoles (JLN) over many years does not seem to be itemized. Below is an itemized table covering 2006-2011 but totaling only P3.13 billion.

Table 2. Amount dispensed to some legislators in the Napoles pork barrel scam

The public is angry because almost none of this amount went to clear projects that benefitted the poor, but were simply divided among the legislators (they allegedly got 70 percent), JLN and bogus NGOs, and some implementing agencies and COA auditors that allowed such irregular distribution of funds without publicizing it. It was the internal whistleblowers who divulged the scam and the legislators involved.

While the public fund siphoned to corrupt legislators and the JLN camp was indeed big, the amount is loose change -- in short, barya -- compared to the amount of money that leaves the public coffers yearly just to pay the interest on our public debt. Most people are not aware of the magnitude of such payment: around P332 billion a year on average from 2012 to 2014: P312.8 billion in 2012, P332.2 billion this year; and P352.6 billion next year.

Source: DBM, Budget of Expenditures and Sources of Financing (BESF) 2014,Table B.20

Interest payments in 2010 and 2011 were also huge, P294.2 billion and P321.6 billion, respectively. So annual interest payment is about 14 times the size of the annual lump-sum pork barrel of legislators, and 32 times the share of the Napoles camp.

Another way of looking at it is that from 2010 to 2014, for every P100 in various taxes that we pay -- personal income tax, corporate income tax, excise tax and value-added tax (VAT) passed on to us consumers, documentary stamp tax, import tax, travel tax, vehicle registration tax, etc. -- about P23 of it is used to settle the interest alone on the country's debts. And only P77 will be used for salaries, offices, subsidies and projects of various government agencies -- local and national -- assuming that such services and subsidies are indeed necessary or are efficiently provided at the least cost possible.


On top of various national taxes, there are regulatory fees to pay like passport fee, airport terminal fee, driver’s license fee. Further, there are various local government taxes and fees.

Some LGUs too have their own public debt and are also paying high interest, but such liabilities are confined at the local levels and are not passed on as part of the public debt of the national government.
The lump sum pork barrel fund of P25 billion per year -- even if we assume that all of it is lost to corruption -- comprises just 1.5 percent of total tax revenues.

Why have our annual interest payments risen to such high levels?  Department of Finance (DOF) projections place the outstanding debt of the national government at P5.865 trillion by end-2013. The country’s population is projected to be around 98.2 million by then, from 92.3 million as of May 2010 national census. This means that every Filipino -- men and women, young and old, rich and poor -- has a per capita debt of about P59,700 by end-2013. Is this a good Christmas gift by the government to the Filipino people?

Table 6. Outstanding debt of the national government at end of period, in trillion pesos

There are some differences in the 2012 and 2013 data under the Budget of Expenditures and Sources of Financing (BESF) and the Bureau of Treasury (BTr). Some items in the former may have not been included in the BTr data, but nonetheless, we are talking about nearly P6 trillion of public debt by the end of this year.

Public debt is simply the accumulation of waste in government -- from P1 billion a year to P10 billion a year and P300 billion a year. If public spending in the past was generally productive -- say in public education, health, roads and bridges, irrigation canals and agrarian reform -- then the people should be productive enough to pay back those debts after sometime, and the debt stock should at least plateau, if not decline.

But this is not happening. Public spending for many agencies and programs was designed to be forever, no timetable and thus are inefficient, with the public debt stock rising around P350-400 billion a year on average.

So even if public spending in the past was not stolen outright, but was spent inefficiently, thus breeding more dependence and waste.

Fiscal irresponsibility has spanned all administrations. The government has been living beyond its means almost every year for many decades now. It is willing to get even high interest rate loans. While the London Inter Bank Offered Rate (LIBOR) can range from only 0.5 to one percent per year, the Philippine government is borrowing at a cost of up to six, eight or 10 percent per year just to finance the annual budget deficit, defined as the amount that expenditures exceed revenues. 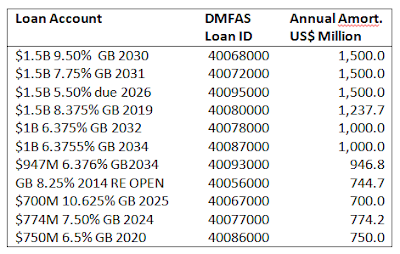 In conclusion, here are the key takeaways:

1. The pork barrel scam is huge, the cause of the scam must be stopped and government -- both Executive and Legislative -- must become more transparent to the public.

2. But the public debt scam is much larger than the pork scam, and many people are unaware of the magnitude of money flying out of their pockets just to pay the annual interest payment.

3. We must not renege on debt payments, both principal and interest. We should pay them. The enormity of the debt should be a constant reminder to the any administration that endless borrowing is wrong.

4. A fiscally responsible government can have budget deficit and borrow a lot in cases of emergencies -- like in the 1990-1991 earthquake and Pinatubo eruption, or the 1997 Asian financial turmoil. But when there are no clear emergencies, the government should aspire to have a fiscal surplus and pay back or retire some of those debts, and cut the spend-borrow-spend policy.

5. Unfortunately, this is not happening, so taxpayers must pressure the government to observe fiscal responsibility, to learn to live within its means and not rely on endless borrowing.