ASEAN 4: Some Economic Data on PH, TH, Vietnam and Cambodia

A friend asked me to give an informal discourse about politics and economics in Thailand, Vietnam and the Philippines. I am not following closely politics in those two countries, I can only gather a few macroeconomic data. And since Cambodia is sandwiched between Thailand and Vietnam, I also included it in the list that I gave him today. 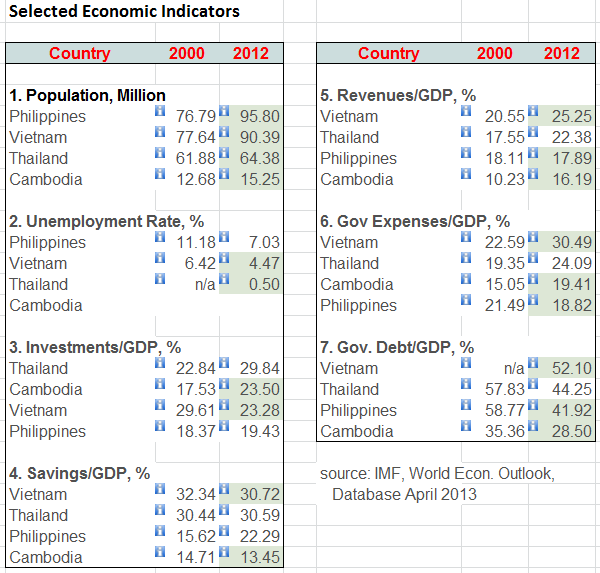 Please note that those data refer mostly to the central or national government. I think local government units (provinces or regions, cities, villages or barangays) and government enterprises data are not included there, at least for the Philippines.

Thus, both government revenues/GDP and government spending/GDP ratio for the Philippines do not include those by LGUs and by some government corporations and financial institutions. So public contribution to PhilHealth, SSS and PagIBIG (housing) are not included in government revenues; also public payment to various local taxes and regulatory fees by LGUs. Governments almost anywhere are BIG and expansive.

Note Cambodia's public debt, only 28.5 percent of GDP, a lot lower than those in the Philippines, Thailand and Vietnam. I wish the Cambodian government will not follow the heavy fiscal irresponsibility of its two neighbors.
------------