Mining 33: Job Creation, Taxes and the Politics of Envy 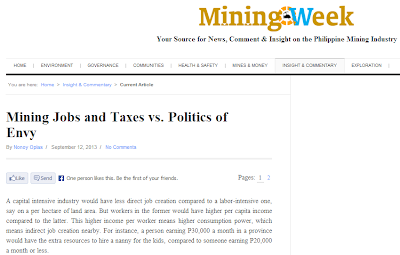 A capital intensive industry would have less direct job creation compared to a labor-intensive one, say on a per hectare of land area. But workers in the former would have higher per capita income compared to the latter. This higher income per worker means higher consumption power, which means indirect job creation nearby. For instance, a person earning P30,000 a month in a province would have the extra resources to hire a nanny for the kids, compared to someone earning P20,000 a month or less.

In addition, higher productivity per hectare of land means higher revenues for a government as the company pays corporate income tax and other business taxes and fees, and the company personnel pay personal income tax, VAT and other consumption-based taxes.

In one study by an office in the Philippine Senate last year, this table was shown.

In many barangays,  municipalities and cities where there are large scale metallic mining, while direct employment is created by the mining company, indirect employment is created by these mining company workers – carinderia and food shops, retail shops for clothing and apparel, appliances and electronic gadgets, furnitures and construction materials, school supplies, and so on.

On taxes, one report in Manila Standard last August 17, 2013,  PH mining taxes not competitive,
said that

A study by the International Monetary Fund undertaken last year shows that the existing tax structure applied in the Philippine mining industry for financial and technical assistance agreements “is not competitive internationally.”

Using the internationally accepted average effective tax rate formula, the Philippine government’s share under the current mining fiscal regime is about 60 percent with the remaining 40 percent going to the mining contractor.

The AETR is the percentage of the value of a mining project that the government receives in the form of taxes and royalties over the life of the mine.

The IMF study, which compared AETRs across the globe, shows that the Philippine government’s share in the value of a mining project under the current fiscal regime of 60 percent is higher than those of Chile, Peru, Australia, Canada, and the United States, acknowledged as global mining industry leaders, which receive government shares of 40 percent to 45 percent.

The IMF considers the current FTAA regime to be a “tough regime for investors compared to fiscal regimes of other countries.”

This is bad news for both existing and potential players. And there are moves to further raise mining taxes, for the large-scale metallic mining only. Small scale metallic mining, despite producing an estimated value of P43 billion in 2010 and P34 billion in 2011, pay little or zero to the national government. They pay only certain local taxes and imposed by the LGU concerned.

If large scale metallic mining companies already pay a lot of taxes and fees to both national and local government units (LGUs) while small scale metallic mining pay very little (see for instance, Mining Taxes and Prof. Winnie Monsod), why is the politics of envy remain strong until today?

In a new article in BusinessWorld last September 11, 2013, Old Tricks, famous economist and my former teacher at the UP School of Economics, Prof. Winnie Monsod wrote,

“… the incidence of poverty in the mining sector is much higher than the Philippine average (roughly twice, if memory serves).

… A 2004 paper by Scott Pegg of the University of Indianapolis, entitled “Mining and Poverty Reduction: Transforming rhetoric into reality”…. found that not only was per capita GDP growth negative for all three categories during that period, but that the growth rates were inversely associated with the level of dependence on mineral exports -- i.e., countries with substantial incomes from mining performance performed less well than countries with less income from mining.

The list of the negative effects of mining (and other extractive industries) continues: countries that become heavily dependent on oil and mineral exports are become more vulnerable to economic shocks (e.g. price volatility), not to mention risk of “intrastate armed conflict,” social risks (price inflation, alcohol abuse, prostitution and child labor). Then there is corruption: Pegg cites the work of Leite and Weidmann (at the IMF) finding that “capital intensive natural resources are a major determinant of corruption.” Further, there is the matter of anti-democratic effects: Ross finds that oil and other minerals impede democracy, but other primary commodities -- which generate few or no rents, produce less export income for the state, and employ a larger fraction of the labor force -- do not….”

The first paragraph is easy to debunk. Capital intensive and higher income large metallic mining attracts lots of job seekers, both skilled and unskilled. Some would get a job either as direct employees of the mining company or indirect employment in various micro to medium size enterprises around the mining area. Some would not and become marginal and subsistence earning workers around the mining communities. The latter group is what is referred as “higher incidence of poverty” group of people.

The second paragraph would most likely refer to informal or small scale mining in those countries studied. There are many factors to explain a country’s fast or anemic economic growth. Like the quality and maturity of their institutions that observe the rule of law and penalizes corruption, frequent stealing or plunder. Compare for instance mining rich Indonesia and its neighbor, mining poor Singapore. The level of economic growth and wealth in the latter on a per capita basis is a lot higher than that in Indonesia. The same can be said of mining rich Philippines and its neighbors, mining poor Hong Kong and Taiwan.

The third paragraph is highly suspect as it does not recognize mining rich yet developed economies like Australia and Canada. And the statement has gathered many types of social ills associated with poverty and dragged them as contributed by mining or extractive-dependence. Non-mining rich countries like India, Pakistan and Bangladesh also have”price inflation, alcohol abuse, prostitution and child labor, corruption.”

Metallic mining is a big opportunity for the Philippines to create lots of jobs, direct and indirect; to expand exports and industrial production, and to raise tax revenues for the government without creating new tax measures or hiking existing tax rates. And in providing various social development projects (free private education, hospitals, roads, drainage, street lighting, livelihood training, etc.) for the communities near the mining area.

The politics of envy against large metallic mining should be exposed and corrected.
-----------