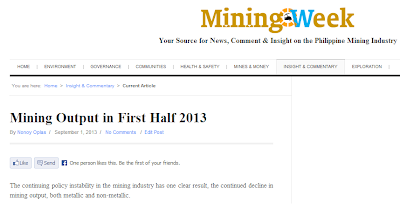 The continuing policy instability in the mining industry has one clear result, the continued decline in mining output, both metallic and non-metallic.

The National Statistical Coordination Board (NSCB) released this week the 2nd Quarter 2013 macroeconomic data. The economy’s gross domestic product (GDP) was able to grow 7.7 percent in 2nd Qtr 2013 compared to its year ago level. The main contributors to such high growth in the expenditures and demand side were investments or capital formation, public and private, followed by government consumption, then private household consumption.

By industrial origin, the main contributors to high GDP growth were construction and manufacturing, followed by financial intermediation and real estate. And the sectors that suffered output contraction were agriculture and mining, with growth rates of -1.1 percent and -2.7 percent respectively, in 2nd Qtr 2013.

The main contributors to an increase or decrease of output are (a) quantity output measured in metric tons, and (b) value of output measured in pesos, which is partly a result of currency appreciation or depreciation of the importing country of our raw mining products. Thus. it is possible that quantity output has remained the same or even slightly increased, but their peso value once exported has declined due to the peso appreciation compared to the US$, Japanese Yen, Chinese Yuan, the Euro, and other major global currencies.

Mining output in constant prices, ie, the effect of inflation has been removed, still showed output contraction, -2.4 percent in the 1st half 2013 compared to their year ago output. The high output growth of chromium and copper mining was negated by high output contraction by other metallic and non-metallic mining. 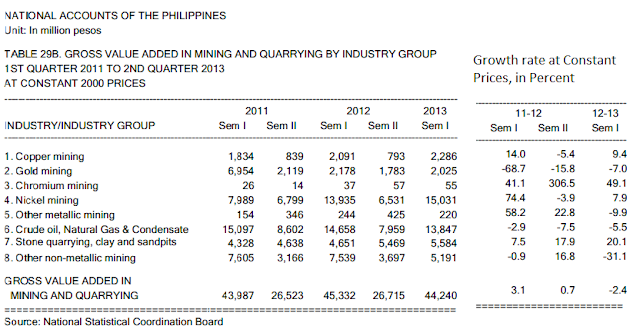 Mining is a huge job creator in the provinces and rural barangays. And aside from direct job creation, taxes and fees paid to the national and local governments, large-scale mining also provides various direct social and economic services to the employees and residents of the mining permit areas.

The continuing policy instability in the mining sector are in the form of (a) proposed higher taxation, (b)  occasional mining moratorium, and (c) reversal by some local governments of a mining permit given by the EMB-DENR.

Such policy instability if not outright  contradictions are not good. They contribute to more business uncertainty and hence, discourages both existing and potential players, especially from big and responsible mining companies from the west.