More than a week ago, August 21, was the 30th death anniversary of former Sen. Ninoy Aquino, husband of former President Cory Aquino and father of current President Noynoy Aquino. He was murdered when he got off the plane upon his arrival in Manila from the US. The Marcos government version then was that a hired killer, Rolando Galman, slipped out of nowhere past a thick phalanx of airport policemen and soldiers armed to the teeth, and shot Ninoy. That story is a hoax, of course.

Anyway, Filipino humor made fun of that Marcos government story. Among such humor is converting portions of the old San Miguel Beer (SMB) pale pilsen bottle's labels into a political comedy story. Here is one, invented by some friends way back in the mid-80s: 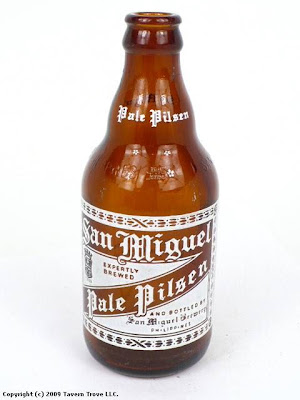 The original story of those old SMB bottle labels is that of a group who have a drinking spree. Really
heart-melting, dramatic story :-)