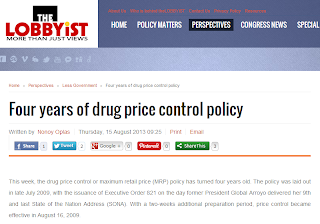 This week, the drug price control or maximum retail price (MRP) policy has turned four years old. The policy was laid out in late July 2009, with the issuance of Executive Order 821 on the day former President Global Arroyo delivered her 9th and last State of the Nation Address (SONA). With a two-weeks additional preparation period, price control became effective in August 16, 2009.

The main and unstated purpose of imposing the policy was electioneering. The May 2010 election was just nine months away and the former President and her arch critic that time, former Senator Mar Roxas who was aspiring to run for President under the LP, they both needed to appear “pro-poor, pro-patients” to get more voters support.

The stated purpose was to make popular but expensive medicines become cheaper, even if alternative generic, cheaper medicines were available at that time.

So, after four years of forcible 50 percent price discount on certain popular brands, have the poor patronized the innovator (or originator or multinationals’) brands?

In a “Policy Dialogue on UHC and Access to Medicines” last July 25-26, 2013, sponsored by the DOH, Zuellig Center for Asian Business Transformation (ZCABT), and MeTA Philippines, held at the Asian Institute of Management (AIM),  Deejay Sanqui of IMS Health made a presentation, “Pharmaceutical Market Perspective.”

For a start, here’s a situationer. The total Philippine pharmaceutical market as of end-2012 was valued at P131 billion. Minus the nutritionals, it was worth P124.5 billion. 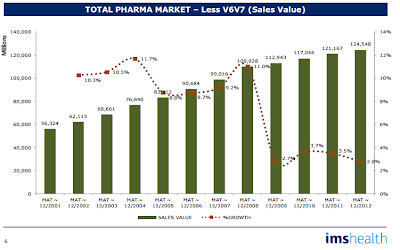 The most popular molecule that was put under price control was amlodipine, an anti-hypertension drug. And the most popular brand was Norvasc, made by Pfizer. Since it was a highly popular, highly saleable brand but considered “high-priced”, forcing its price to be slashed by half would result in the poor and middle class shifting to it away from the cheaper generic brands of amlodipine. Did this happen?

No. From the IMS data, even before the MRP policy was imposed in mid-August 2009, the vertical line in the chart below, there were plenty of generic brands of amlodipine already available, and many people were buying them. When Norvasc 5mg tablet’s price was slashed from P44 to P22, the poor did not shift to it because there were already amlodipine 5mg generic brands that were selling for only P10, even P7.50, so the P22 was still high. The main beneficiaries of the drug price control policy were the rich and upper middle class who were patronizing Norvasc, whether its price was P50 or P30 or P20 a tablet. 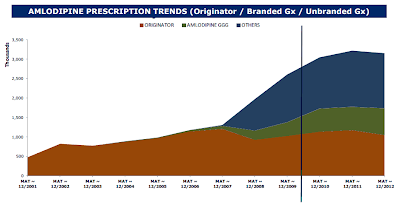 For simvastatin, an anti-cardiovascular (heart) diseases drug molecule, the same trend was developing – many cheaper generic drugs were already available for the poor even before price control was imposed, again marked by the vertical line in the chart below. In fact, the share of the innovator brands that time was already small, perhaps below 15 percent of the total market value for simvastatin. There was really NO need to impose price control for this molecule.

But then again, “helping the poor” was just an alibi for the two political camps then. Their goal was simply to look “pro-masa, pro-mahirap” even if the poor would not directly benefit from such coercive and arm-twisting in forced price discount. 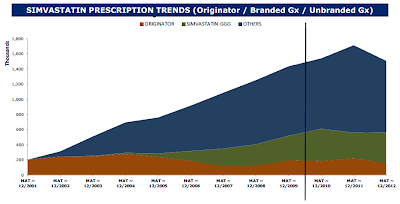 Another popular drug molecule against breast cancer and related diseases, Tamoxifen, was also put under price control.  What was ironic was that the share of the innovator or originator brand was almost nil. Prescription for generic variants was already very high, before, during and after MRP policy. 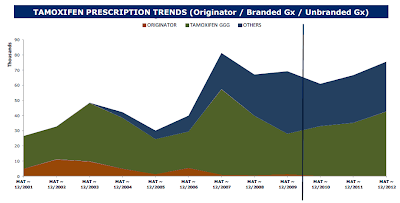 One may wonder, if the policy did not benefit the poor but only the rich and upper middle class, why is the policy not withdrawn?

That is one ugly aspect of heavy government intervention. Once a policy or regulation was imposed, it almost always becomes permanent and long-term, never temporary or short-term. The two main protagonists, now Congresswoman Gloria Arroyo and DILG Secretary Mar Roxas, plus former DOH Secretary who became Civil Service Commission (CSC) Commissioner Francisco Duque, have been out of medicines policy after the 2010 elections, yet the damage done by their policy remains until today.

What is that damage? The politics of envy, that if a company is able to produce useful, popular and revolutionary products, the politics of envy and government coercion will penalize that company by forcing it to give mandatory, forcible and coercive price discount. And since all the affected companies were multinationals, the message across other foreign investors and suppliers was negative.

There are no government moves or attempts to withdraw this policy. All the innovator/originator and generic manufacturers, the drugstores and hospitals, have already adjusted to that ugly reality.

What the policy can teach us is to avoid, to refrain, inviting government to come and impose price regulation and price control. In whatever sector or sub-sector of the economy.

Government can do better if it will encourage and allow more players and competitors, local and foreign, to come in. More competition almost always results in price reduction or stability, benefitting the consumers, patients especially.
------------