After I posted UHC 17: First, Second and Third Lines of UHC for the Poor in the Advisory Council loop last week, July 30, DOH USec Madz replied that DOH budget is presented as DOH proper which is smaller and DON family which is bigger because it includes the fund of National Nutrition Council, PoPCoM, corporate hospitals PHC,Lung Center and NKTI.

Thanks Nonoy. I know it is not easy to be done, but if we want to be serious in looking after the health especially of the poor who can not afford to buy their medicines, ways to ensure they get the right medicines (quality, safety and efficacy assured) must be done. As I write this comment I know someone is dying because of;

2. medicines taken maybe are what are needed as determined by the doctor but the quality is questionable; counterfeit, substandard, fake, spurious and falsified but purchased by LGU or a government agency because they are the cheapest. ( price is not only the consideration in buying medicines anyway)

3. medicines are right and chosen right but not used right because of lack, no or misinformation  given to the patient and . . .  many more reasons.

RESULT : GAP between the clinically-tested effects of the medicines and the actual effects when used by the patient happen. Is this not a GOOD WASTAGE of the people's money?This is why the PPhA and I am supporting the DOH to really put its IRON HANDS on this.

I thanked USec Madz for her reply. I checked the DBM’s Budget of Expenditures and Sources of Financing (BESF) 2014, and here’s what I got. 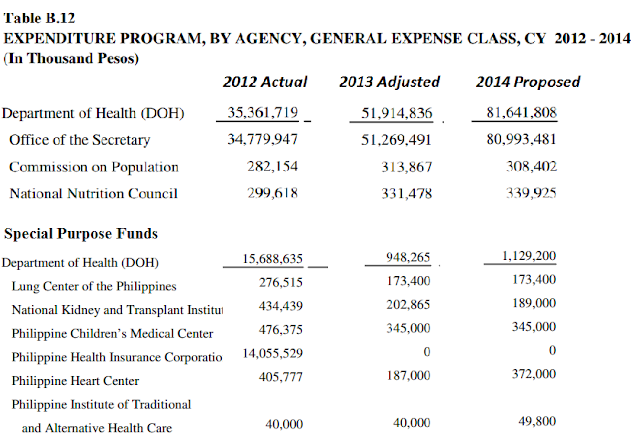 So DOH’s regular plus special purpose funds was P51.05 billion in 2012, much larger than other DOH presentation saying they only have P42 billion last year. The infusion of P14 billion for PhilHealth last year, or one year before the elections this year, explained such huge jump in 2012 budget.

The deregulation of health insurance that I mentioned in my earlier paper refers to allowing people to have health insurance  but it does not mean that it should be PhilHealth only. People, especially those in the formal sector, should have the freedom and choice to opt out or not contribute to PhilHealth if they wish to, so long as they get another health insurance provider – an NGO or corporate HMO, an LGU, a private health foundation, and so on..

I also thanked Leonie as her perspective as a pharmacist can inject new perspective, a wake up call for many sectors who only focus on "cheaper medicines" as the single most important consideration in incorporating government medicine procurement with UHC policy. 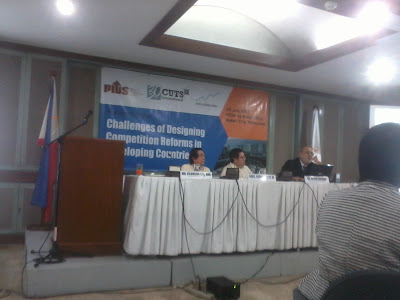 Also last week, July 29, I attended a forum on "Designing Competition Reforms in Developing Countries" at the Phil. Institute for Development Studies (PIDS), Makati. DOJ Assistant Secretary and a friend, Geronimo "Indian" Sy mentioned in his presentation that a local pharma owned by a Congressman is able to supply medicines to many government hospitals and there might be anti-competition acts there.

He did not stay long after his talk though. I spoke during the open forum and supplied the "missing info" referred to by ASec Sy. I said that it's PharmaWealth owned by the family of former Cong. Ferjenel Biron. I added that an anti-competition act is possible because as a Congressman approving, raising or reducing the budget of government hospitals and other agencies, the legislator has the advantage in "winning" a medicine supply contract with many DOH hospitals. I saw the data presented during a UHC forum at the AIM the week before that.  PharmaWealth can supply amlodipine 10mg for only P0.35 a tablet to some government hospitals, and sell at P2+ or P3+ per tablet to other government hospitals. 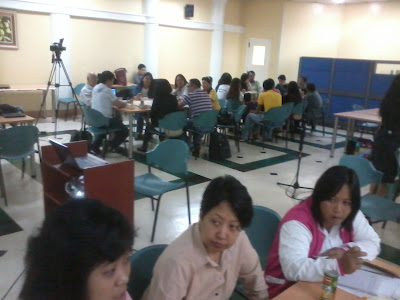 Last July 31, I attended the AIM-Zuellig Center forum for Patients and Consumers sector re UHC, held at the DOH. Many patient groups from Nueva Ecija, from different municipalities, came. It was revealing that many said they have NOT heard of “Kalusugan Pangkalahatan” or UHC all these years, some said they heard it only  that day.

Another issue that they raised is that RHUs and BHS are not giving sufficient primary healthcare. An ordinary and preventable disease affecting rural and barrio people not treated and detected would later mutate and deteriorate into something serious. Even if patients get full PhilHealth coverage, the situation usually is too late or at least very costly as the disease has reached stage 3 or stage 4 level already. 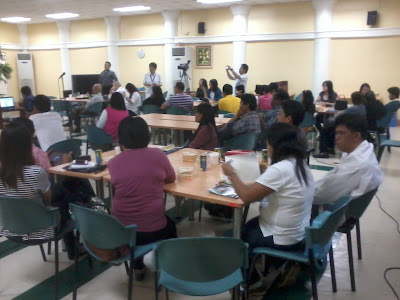 Repeating issues of no balance billing (NBB) as not really implemented was also mentioned, as many government hospitals do not have sufficient supply, they ask the patients to buy certain supplies before or during confinement, so that out of pocket (OOP) spending can be high.

Dr. Ramon Paterno, convenor of the UHC Study Group in UP Manila, referred to me during the open forum that my advocacy of small government philosophy cannot apply in healthcare for the poor. I spoke after him and clarified that while I advocate minimal government in healthcare and many other sectors, I support big government involvement in dealing with children's diseases and infectious diseases. But I do not support big government subsidy to address NCDs for adults as it is a bottomless spending. Even if the DOH will get P1 trillion budget, it will never be enough to help NCD cases of tens of millions of adults. His face widened and smiled when he heard my clarification. Doc Quasi, Doc Domingo (RM awardee), Doc Escartin were also there.

I was seated beside Princess Nemenzo of WomanHealth that day. I said that the issues we discuss today are generally the same issues they were talking 20 years ago, and I bet that 20 years from now, the same issues will be discussed again.

High government involvement in any sector raises high expectation, and hence, high disappointment if not dissent. That is why it is important that government should focus on only a few important functions and do that job well, and leave certain functions to various market players. Health can never be fully "government responsibility". There should be a big room or allowance for more personal and parental responsibility, civil society responsibility, in healthcare. You keep pointing the fingers to the government, more political noise will happen. But you tell people to point some fingers on themselves, there will be less political noise.

Yes, I agree with you that while the government has to allocate budget for health services, every single resident of this country has to realize and understand their own personal responsibility to take care of themselves and not indulge in abusive practices that will lead them to ill-health. We need to know and apply real preventive and primary health care practices. This way we maximize utilization of the Philippines limited resources including that for health care services.