The other day, a friend way back from UP Diliman undergrad in the 80s, JB Baylon, posted this in his facebook wall and tagged me, below. I am attaching some posters circulating in facebook for the Citizens' indignation rally on Monday, August 26.

…I think it is important to highlight the fact that the PORK we wish to save from the clutches of the porkish is only 1% of our total national budget. This is not to say that it is not worth "saving" even just 1% from ending up in pockets and not in real projects. But it highlights that there is a bigger issue here which should show us to the ultimate purpose of our "agitation". You see we could be focused on the 1% and all het up about it -- but what about the 99%? Who's watching that?

In the Western world they have this saying, "Penny wise, pound foolish". 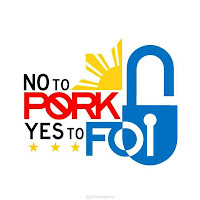 That's where my argument about the need for the FOI bill comes in.

This is why I keep saying, we cannot fall back on our usual habit of knee jerk reactions to issues. We will end up focusing on the 1% and leaving unattended the 99%. Penny wise, pound foolish.

The real issue, folks, is TRANSPARENCY.

… Now, will it take too long to populate the database? of course not. Everytime an NGO CSO or whatever entity applies for a pork grant it should enter its info into the website -- so long before the COA can finish an audit most of the info should be there, for the public to see and the media to verify! Early on we will know if Senator Pork is lining his pockets or Congressman Swine is filling his sty. And then it is up to us to act. 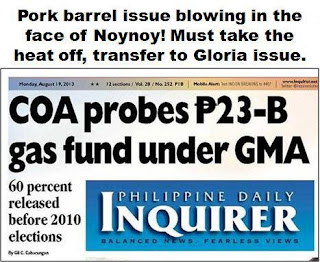 To repeat: I am worried that our focus on pork and its abolition misses the bigger issue: TRANSPARENCY. Eliminate the pork but do not institute transparency and you have a problem with the 99% of the budget. Insist on the institution of TRANSPARENCY -- easier to do in this day and age of Information Technology -- and you strengthen the power of the citizenry -- the Bosses -- over any public servant who may wish to pull a fast one. That would still happen, for sure -- but at a scale far less than the one we are discovering as we sift through the sty.

I thanked JB for his ideas and commented that more than transparency, government size -- the bureaucracy, regulation and prohibition powers, the budget, should shrink, or at least should stop expanding fast.
http://funwithgovernment.blogspot.com/2013/08/pork-barrel-4-ten-q-on-pork-scandal.html

I support Malou Tiquia's proposal that the 2013 budget (P2 trillion) be re-enacted, throw away the 2014 proposed budget (nearly P2.3 trillion). For those in automatic appropriation like IRA, a supplemental budget can be passed. Interest payment this year is P333 billion, will rise to P352 billion next year. Government just keeps the spend-spend-spend, borrow-tax-borrow policy irresponsibly, spanning all administrations from Marcos up to the present. 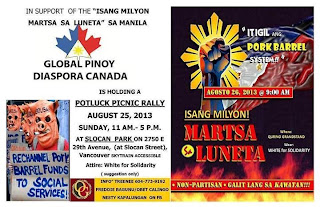 A mutual friend, Steve Cutler, replied that “the phrase "moderate your greed" comes to mind for citizens and residents, too. For the government to shrink we as the people must stop asking for so much from the government. It seems like every time something happens, we turn to the government and demand action. We fall on hard times, and we want the government to give us a helping hand. Most often, that is cash, but other times it is some kind of service. Turning more to our own resources, and paying for services we want on an as needed basis, which is the model for a toll road, seems to be what you're suggesting.” 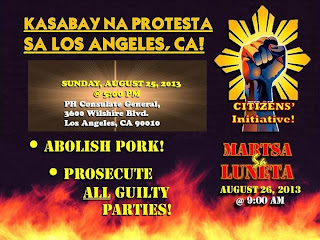 Yes, Steve is correct. Many people asking for the abolition of pork barrel are unaware that they are pointing some fingers on themselves. You want more condoms for the poor? Buy some of it and give to the poor, do not ask for more budget (and more taxes and fees to finance it) even for simple and ordinary procurement. Government should focus, even expand, on its 3 core functions:

The main function of government, its raison d’etre, is to protect the citizens’ right to life (against aggressors), right to private property (against thieves and saboteurs) and right to liberty and freedom of expression (against bullies). All other government functions are either secondary or unnecessary. This is where shrinkage of government bureaucracies and spending should occur. Where there is less money to steal, less stealing will happen.

Another friend, Bernard Ong, posted today in his facebook wall, 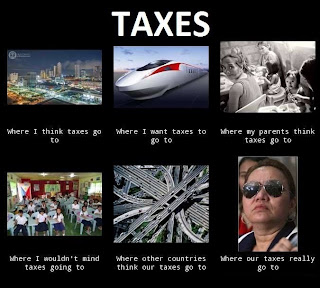 A few friends ask "who will spend the pork if it is taken out". Aren't we just transferring corruption from one pocket to another?

My answer is that it should be given back to taxpayers in the form of middle class tax break (increase the minimum threshold for taxable income). They will spend it on things that benefit them directly (educ, health care, housing, holidays, etc) & expand the economy thereby creating jobs & business for others. Smaller govt = less corruption. Therefore... Abolish Pork, Cut Taxes!

I thanked Bernard for tagging me. Yes, I like that, drastically cut, ultimately abolish, income tax, as the government has dozens of other taxes and fees to survive.

But that will take a long debate over a long period of time. For practical and short-term purposes, I wish to see the budget to shrink or at least be retained. So the current P2 trillion budget should be re-enacted for 2014. Cut spending, cut/remove pork barrel, cut borrowings, cut interest payment on public debt (P333 billion this year, P352 billion next year). Once we drastically reduce the public debt, local and foreign (rising by P400 B a year), income tax cut can come in. PROVIDED that people will not demand more and more spending. Condoms nga lang eh, people want new public spending pa. 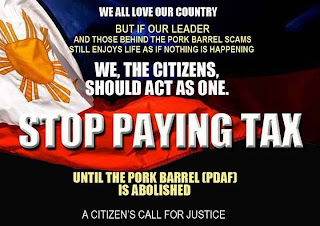 There are some campaigns now for a "tax revolt" where people will stop paying taxes until the pork scandal is addressed. As I wrote above, I support the abolition of income tax over the long term. But it is difficult to do the "non-payment of taxes" for fixed income earners. For flexible income earners, it is possible. One suggestion by a friend is when one buys fuel for the car or do other purchases and if he does not need the receipt, do not demand it. This way, the seller can further avoid paying taxes.