The Napoles-Some Legislators’ pork barrel scandal continues for several weeks now. And I started reading only a few days ago. I saw that there are too many articles written already. Here are some headlines, from the Inquirer. 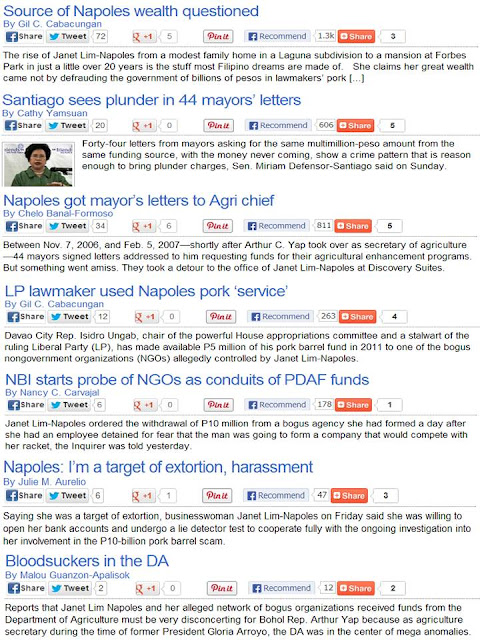 After the Inquirer, Rappler seems to be second in devoting lots of papers and analysis about the issue. 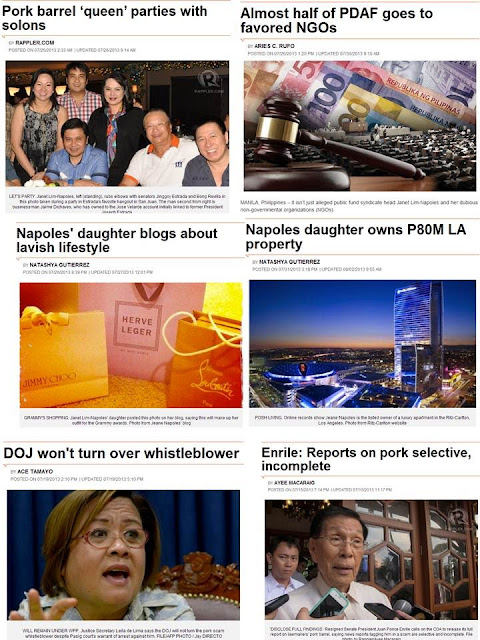 For now, I just want to comment on what my former boss in “Public Forum”, IBC Channel 13’s public affairs program from 1987-90, also my former undergrad teacher, Prof. Randy David, wrote last week. In his column A Thesis on Corruption at the Inquirer last July 31, 2013, Randy wrote:

Even if only half of the allegations against her turn out to be true, Janet Lim-Napoles, the supposed brain behind the mind-boggling pork barrel scam that is the subject of ongoing Inquirer reports, would easily qualify as the country’s foremost expert on corruption. The elaborate scheme attributed to her presumes an intimate grasp of the workings of the political system that no Filipino scholar has ever fully documented....

Should she ever land in prison and need a benign intellectual pursuit to keep her active mind at work, I would recommend that she consider writing a participant-observer account of the social system of corruption. I would be happy to offer advice on the theoretical framework. A working title for her thesis might be: “Politics and the function of corruption: How the pork barrel works.” The aim of the study would be to bring out the background assumptions implicit in the way the JLN group of companies navigated the murky waters of government. Such research would help transitional societies like ours find effective antidotes to the scourge of corruption in public service.

I would begin with the hypothesis that the pork barrel, which goes by the pretentious name Priority Development Assistance Fund (PDAF), is really nothing more than a bribe to the legislators who hold the power to approve the national budget. This concession can take many forms and go by other names like “congressional initiatives.” But the basic idea is the same: to provide congressmen and senators the means to cater to the specific needs of their constituencies, and, if they wish, to recoup part of what they spend during elections….

The main argument of this imaginary thesis would be that a political system like ours incorporates corruption into its operations as a condition for its maintenance. In short, corruption is functional to the system. The system’s default is to reproduce itself. Nothing will compel it to change except persistent pressure from outside the system. If the other institutional systems—the mass media, the Church, the economic system, the law, etc.—can generate enough noise and irritation over its performance, the political system will have no choice but to pause, reflect and reform."

Here are my comments to some of Randy's points.

(1) “the pork barrel… is really nothing more than a bribe to the legislators who hold the power to approve the national budget.”

I Agree. Pork barrel is icing on the cake. A bribe by the executive branch to the legislative branch so that the former can continue many of its wasteful spending, its high and multiple taxation, and its endless and irresponsible public borrowings. This applies not only to the current but to all the past administrations, from Marcos to Cory, Ramos, Estrada and Arroyo. If legislators are not bribed with pork barrel, they will invent new schemes anyway.  They are deliberating, allocating and approving trillion plus budget annually, became P2 trillion this year, and nearly P2.3 trillion next year, national government alone – excluding funding and collections by LGUs, government corporations and finance institutions like SSS, PhilHealth, PagIBIG, PAGCOR, PCSO, DBP, Land Bank, MWSS, MRT, NFA, Napocor, and a hundred plus more -- and they have zero share from their efforts? That is like asking the legislators to become angels and be poor by choice and hence, is impossible to happen.

(2) “a political system like ours incorporates corruption into its operations as a condition for its maintenance. In short, corruption is functional to the system.”

Again, I agree. The budget keeps rising yearly despite wastes and corruption in past budget that are under investigation and/or unaccounted for, means that the scheme has its own life, its own momentum. But while people refer only to corruption by the legislators and those in Malacanang, the LGUs, and the appointed bureaucrats especially in notorious agencies like BIR, BOC, DPWH, DOTC, LTO, DILG, PNP, DND, AFP, DepEd, etc., what is rather hidden is corruption by the public themselves. The  voters, the welfare seekers and dependents, the academics and consultants, the private sector suppliers, the NGOs and media, the multilaterals and foreign aid. Meaning to a certain extent, you and I, we are somewhat part of the corruption in government without our realizing it. How? 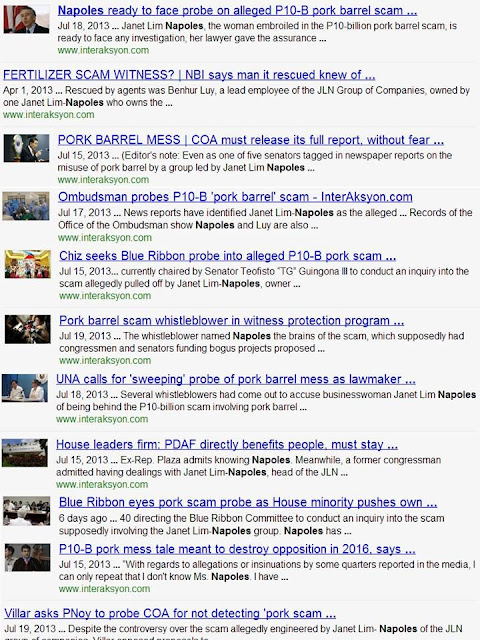 (3) “If the other institutional systems...can generate enough noise and irritation over its performance, the political system will have no choice but to pause, reflect and reform.”

This, I think, is partly incorrect. Corruption happens not only in the wastes or robbery of legislators' pork barrel. There is also corruption in non-pork barrel spending, like spending in agencies and sectors where the target benefits or results are absent or not clear.

Just one generation of useful and efficient public education, say in the 60s, would have already produced productive and skilled parents, and their kids would no longer be poor and need another round of education and books for the poor, healthcare and hospital for the poor... for many generations.

In short, many policies and the way they were designed were wasteful and corrupt in the first place. When those programs for the poor were designed in the 60s for instance, they were meant to be perpetual, forever and no time table subsidy programs, and poverty persists until today. And current welfare and subsidy programs, still forever and no time table, are expected to produce the same degree of poverty by 2050 and beyond.

Corruption in policies makes corruption in implementation and legislation easier to commit, with or without pork barrel.