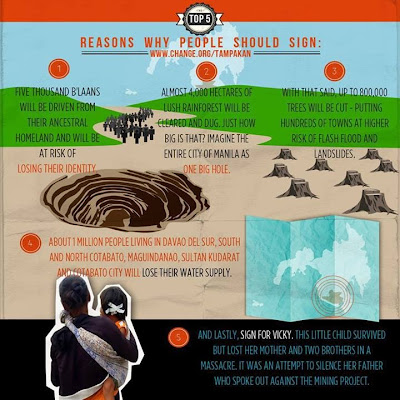 A friend, Arcy Garcia, posted this poster in facebook soliciting anti-Tampakan mining signatures from the public. It says that "Almost 4,000 hectares of lush rainforest will be cleared and dug."

I commented on it saying that this is misinformation. If you have a 4,000 hectares mining permit area, you don't clear cut and dig a hole in all of it in one year. Usually you clear only 100 hectares or less, dig and dig for 10 years or so, then close it with top soil, plant trees as stipulated in the contract with MGB-DENR, then you clear and dig again on another 100 hectares or so.

I checked the website of the Tampakan project, owned by Sagittarius Mines, Inc. (SMI). My above statement is not even correct. Their plan is to have the copper and gold ore extraction in just one area, projected to be about 2.5 kms.  Wide, 3 kms. long and about 0.8 km deep, after 17 years of operation. 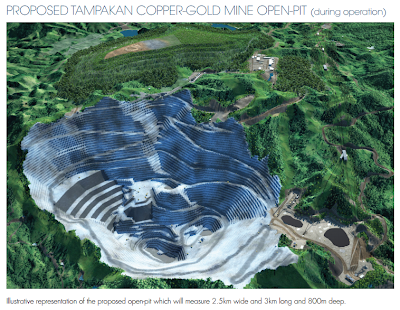 Arcy asked why it should be open pit mining, and not underground or tunnel mining. Personally I am in favor of open pit mining because it is less costly, so the company will have excess funds to build a school, a hospital, and housing for the employees and their dependents, roads and street lights for the rest of community. It is also less dangerous to workers compared to tunnel mining.

People opposed to any form of large corporate metallic mining often cite the case of the Boac, Marinduque mining and the huge mine tailings disaster. True that it was indeed a big environmental disaster, I saw the tv clips many years ago but I am not updated what what penalties were done to the mining company there.

There are only 35 large metallic mining operations nationwide. Except for the Padcal tailings destruction last year after heavy rains in Northern Luzon where Benguet Mining was heavily penalized by the MGB and LGUs, there are no other reports of mine tailings going to river systems. All of them are still contained and many have already dried up. I saw two tailings pond in Rio Tuba in southern Palawan. One active and one closed/dried up, here are the photos, http://funwithgovernment.blogspot.com/2013/03/mining-8-rio-tuba-mining-in-south.html

Nickel mining there has been  in operation since the 1970s and it seems there was zero incidence of mine tailings going to the river. Barangay Rio Tuba is more developed than Bataraza town proper, a few kilometers away. Dozens of people are applying for work in Rio Tuba every month, even as street sweepers to reduce dust pollution so they can have stable source of income. In nearby barangays and towns where there is no mining, life is poor and pathetic.

The Mining Act of 1995 or RA 9502 itself, not the BIR nor LGUs, mandates the large metallic mining firms to spend on Social Develoment and Management Project (SDMP, like hospital, public school, roads, skills training, etc.) on top of paying national and local taxes and fees. In a sense it is a good law. If LGUs and the national government (NG) will just get the money from dozen plus types of mining taxes and fees, most likely they will not do their job properly.

Take Bataraza town proper -- no hospital, old public schools with possibly no computers, no internet, ugly street roads. In Brgy. Rio Tuba, there is a private hospital, private school, with huge Apple computers with internet, and still free to the public, especially to employees and their dependents. Politics and politicians have their own dynamics and special interests that are off tangent with the community interest. 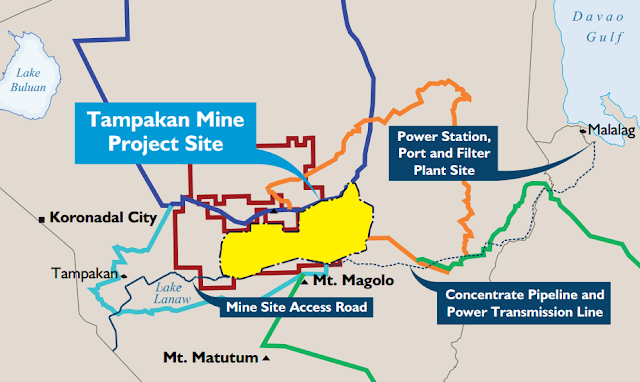 Metallic mining is a highly capital intensive business project. Workers there hardly touch the rocks and soil that contain the metallic objects. Bulldozers, backhoes, trucks and other big machines do. It therefore creates skilled labor, like drivers, operators and mechanics of those huge trucks and machines. Then another batch of workers who will do the forest rehabilitation of mined out areas.

But I think that instead of covering that 800-meters deep hole, it would be more economical, more practical, to covert that deep hole as a lake or dam, to catch excess water and flash flood during heavy rains. After the rainy season, that man-made lake can become a tourism area with lots of outdoors, fishing and water sports facilities.

There are concerns about killing related to the Tampakan project. It is a criminal act that must be pursued and the criminals should be penalized. Whether killing happened in a mining area or in a ktv bar or in a private house drinking session, the details are less important. Any act of killing or attempted murder should be penalized.

This is one example how some LGUs can be partners in crime of those private interests, local or foreign. It is impossible for anyone to have bulldozers and other capital equipment mining and quarrying without connivance and approval by LGUs and the local police.
--------------