The other day, Forbes released the Philippines' 50 Richest in 2012. 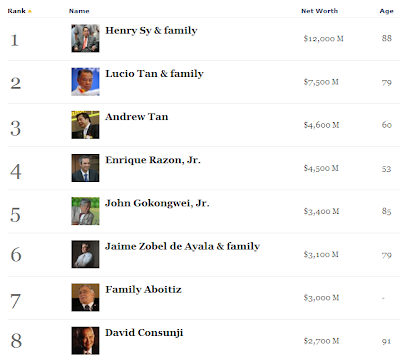 Many people will shake their heads why these 50 people and families have so much wealth while tens of millions of Filipino households are poor. Well, with the exception of the Ayalas, Zobels and Lopez's perhaps, few of them were born very rich, The Sys and Tans started poor and worked their way up. These guys also become very rich because they do not have enough competition as foreign capital and professional talents are restricted if not prohibited in certain sectors to compete with them.

The richest entity in the country -- the Philippine government, with P2+ trillion budget for one year for the national government alone, plus trillions in other assets like SSS, PhilHealth, PagIBIG, PAGCOR, PCSO, plus LGUs' revenues -- is not able to uplift the conditions of the poor despite their mandate to do so.

Some friends asked why MVP is not in the top 20. I think he is just a highly paid manager and hence, technically an "employee" of the owners of those big companies. Another friend suggested that he is a dummy by some foreign capital who are prevented by the Philippine Constitution to have investments beyond the 40% limit. I think it's true, and having a dummy is one way to get around that lousy and restrictive provision in the Consti limiting foreign investments, so he has done good for the country in terms of generating more investments, more jobs. And being a highly paid manager, he has control where and when to invest or pull out, where and whom to give charity/CSR projects.
----------