Meron pa akong link na nakita while (still) looking for the alllowable emmmision. It was posted way back 2009

Highway Robbery Along Commonwealth Avenue
Written by bp on May 5, 2009 · 5 Comments 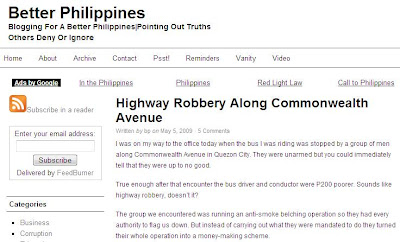 I was on my way to the office today when the bus I was riding was stopped by a group of men along Commonwealth Avenue in Quezon City. They were unarmed but you could immediately tell that they were up to no good.

True enough after that encounter the bus driver and conductor were P200 poorer. Sounds like highway robbery, doesn’t it?

The group we encountered was running an anti-smoke belching operation so they had every authority to flag us down. But instead of carrying out what they were mandated to do they turned their whole operation into a money-making scheme.

I know money changed hands because I saw it as it happened. I was sitting at the front row and as I peered through the window I saw the bus conductor giving P200 to one of the team members.

It was quite a funny sight actually. The man who flagged us down was acting all indignant because the bus driver, who remained glued to his seat, refused to hand over his vehicle registration. So he went on to admonish the bus driver. But as he was delivering his sermon he was also stealthily reaching out for the conductor’s hand, which held two tightly folded P100 bills.

What a funny charade I thought. It was really funny I failed to stop myself from laughing and blurting out, “ayos na, merienda na.” The clown even heard what I said. As he walked away he flashed me a toothless smile not even his own mother would appreciate.

Now, I’m left wondering again if calls for personal change would even work on people like these.
------

About three weeks ago, I brought my wife to her office at the Asian Institute of Management (AIM) in Paseo de Roxas, Makati, my 5 years old daughter was with me, then I turned right at Pasay Road. Not far from the intersection, I was flagged down by many "men in black" shirts, again, the Anti-Smoke Belching Unit (ASBU) of Makati city hall. They wanted me to go to the right side, I stayed on the inner lane and asked them what's the problem. They said "smoke emission test", I said "Bossing mali-late na ito sa klase ang bata" (my daughter will be late in her school), somehow children can evoke a soft heart among these bureaucrats, and they let me go. And flagged down other old-looking diesel vehicles behind me.

The Makati ASBU used to be in Buendia, one time along Metropolitan Ave. behind Mapua-Makati campus (ie, at the back of Buendia).

Pasay ASBU would also be in Buendia, Pasay after crossing Taft-LRT. Or they may be at Buendia-Roxas Blvd intersection, under the flyover. It's difficult to reason out to these guys as there are plenty of them. And since their intention is really to make your vehicle "Fail" their emission test and get money from you, via extortion or fine at the city hall, you'll be helpless.

This morning, a lawyer friend posted in his facebook wall, "There is a creeping inflation lurking behind all the big news....didn't you notice?"

I commented the following:

How I wish someone would do something on this issue. I also did what you said, paid the guy to get some sort of certificate so next time you wont get caught. Unfortunately if you pass by another group in a different location they will not honor your certificate. Their excuse "Sir sa makati po yan iba kapag sa pasay" So now you have to get different certificate per city. This is truly corruption right in front of your face. By the way i just paid 1000 and did not get any receipt for it. Buses were passing by with more smoke but none were apprehended.

I really hope magawan ng aksyon ito. Like what I have, just by internet search, lalabas lahat ng reklamo regarding this operation. I am willing to commit myself as a witness or resource person kung magkakaroon ng investigation on this. And this comment of mine can be used as official statement. Sir Nonoy Oplas, baka po pwedeng kayo maginitiate ng movement (aside from these posts) para masimulan ang hinihingi nating investigation sa corrupt practice na to.

Thank you for all the comments. LGU extortion via ASBUs and other rackets is indeed victimizing more private citizens. It's a shame how decentralization has also decentralized corruption from the national to local governments. It seems difficult to stop this racket because it is a deliberate, well-organized and well-protected racket by some LGU officials and employees. The respective city halls earn big revenues from this racket as no one can "pass" their test. The malady is that supposedly opposition politicians and pol. parties at the LGU levels, and even mainstream media, are not advocating a stop to this racket....

I had the same experience also last Saturday. Its really bothering that they can do such kind of things to motorists (the "HULIDAP" term) and can be able to sleep soundly at night. Para bang normal na sa kanila ang ganitong panloloko at hindi na sila tinatablan ng "KONSENSYA" nila (if meron pa ba). Ganyan ba talaga ang gusto nila ituro sa mga anak nila? Pera lang at wala nang halaga ang dignidad ng isang tao? Nakakalungkot isipin na ganito ang magiging systema sa halos lahat ng ahensya ng gobyerno. Walang binigay na OR na usually issued kapag meron ka violation or binayaran na "LEGAL". I was meaning to ask where can we take our complaints. Who do we go to? We should do something about this as this is becoming the norm for almost all traffic enforcement units and that "ASBU" that it becomes so rampant that poor motorist get victimized by them! Masasabi ko lang na hindi man ngayon ang balik nyan sa kanila, meron yan...mabilis ang karma! Please, if you know where we can complain, tell us so we can put a stop to this growing "CANCER" to our society. Thanks!