After I shared  Drug Price Control 19: Why is the Policy not Withrawn Yet to a number of friends in the Philippine health network yesterday, I got a reply from Ms. Leonila Ocampo, the President of the Philippine Pharmacists Association (PPhA), also a member of the MeTA Philippines Council, DOH Advisory Council on Healthcare, etc. Leonie allowed me to post here her comments. She wrote,

I agree with you Nonoy. I too, am not for price regulation. We have more than enough SKUs from where the consumer can choose from. What we need to focus is to educate the public of the many possible choices but also note that the choice has to be guided by someone who understand medicines not only in terms of cost but more importantly on the outcomes it delivers to the patient when used.; outcomes which could be affected by a number of factors e.g. lack or no information on the right way to use it. COST, after all, is not all about the price tag but the total amount one pays for the effect the medicines gives to the patient to improve his quality of life.

My hope is for government authorities to support us, the Philippine Pharmacists Association, in our drive to improve the Pharmacy Services in the country by pushing everyone involve, including non-pharmacists operators of pharmacy to support that real patient servicing in the pharmacy counters happen for the patient to get the full benefit of his medicines and avoid any possible untoward effects that may result to another expense of the patient. More and more of the added cost could happen because of complications that may occur due to non-clear understanding in the use of the medicines.

Yes, I have to write that piece yesterday to ask the DOH again and again -- if the policy isn't working, why not withraw it?

Which is a better policy, push the Generics Law of 1988 which encourages generic drugs, or retain the price control policy of 2009 which encourages purchase of branded innovator drugs? The fact that PCPI leaders and members themselves were already complaining that the policy is adversely hitting them too, that should be additional consideration for the DOH to discontinue the policy.

And the bigger damage which will remain "invisible and non-obvious" to us, is the absence of some important innovator drugs and treatment to cure certain diseases because their manufacturers have seen the political threat of price dictatorship by the government. That is, one can buy those drugs in Hong Kong, or Singapore, or S. Korea, Taiwan, etc., but not in the Philippines. It cannot even be considered as "product pull-out" since those products will not be brought here in the first place. I don't think we will be better off with this kind of scenario.

I hope that MeTA Philippines can conduct a forum to assess the price control policy and give one categorical answer: did it achieve its goal of cheaper drugs for the poor or not? (Or did it only give cheaper drugs to the rich and middle class?) If the answer is no, then what are the other alternatives that are already in existing laws -- Generics Act of 1988, CML of 2008, etc.?

Yes Nonoy. In the last FIP (International Federation of Pharmaceutical Association) Congress held in Hyderabad, India, the FIP Council, which Philippines is a member, passed a resolution on how to help Canada resolve their problem on non-availabi;lity of innovator drugs (with no available alternatives) and innovators (with a number of alternatives already available) due to pull out or non-production done by manufacturing companies due to loss in profitability. In fact when this was discussed, I was worried looking forward to a time that the same might happen in the Philippines. Do we want this to happen to us anyway?

I hope we can go to do initiatives which could better address the many problems causing under treatment, failure of treatment, adverse effects due to misuse and abuse of medicines and other herbal supplements, and other forms of medication errors which are the very culprit of added expenditures in the use of medicines if we want to be cost-effective and help the patients get the optimum effects of their medicines.

PPhA IS WORKING ON THIS BUT AS A PROFESSIONAL ORGANIZATION AND IF NOT SUPPORTED BY LEGISLATION, WE CAN ONLY DO MUCH.

This is another breaking news from Leonie, that even Canada suffers from non-availability of some innovator drugs. So desperate patients have to buy those medicines online from the US, or they must fly to the US, UK, India, etc. to get those drugs and treatment that are not available in Canada. Which makes treatment even more expensive, which defeats the purpose of natonalized healthcare. I think the case here is and small- or non-reimbursement of innovator drugs if some generics are available.

This should be another consideration for the DOH, if policies that tend to demonize innovator companies really help the public or harm them.

Canada's nationalized and socialized healthcare system is suffering from heavy financial bleeding, so the Canadian government has to resort to healthcare rationing. I.e., queueing to get physican appointment and "free healthcare" can stretch to one month or longer. If one's medical case and disease is not urgent and life threatening, he/she will have to wait for one month or more to be seen by a doctor. At least we don't have that situation in the Philippines yet. Not yet.

I think Healthy Options, other herbal stores, are raking in big money for those endless health supplements. Some of these may qualify as "irrational drug use".

Government should just allow more competition. Let the innovator companies price their products high if they wish to, so long as generic companies are around to provide more choices for the public. So what if Pfizer will price its Norvasc 10 mg at P50 or higher, so long as other cheaper amlodipine generics are available at P15, P10, even P7? Why force the higher priced drug to become 50 percent "cheaper" when the poor and the public have options to get cheaper drugs of the same generic category?

This way, we do not penalize and demonize the innovator companies while giving fair and equal treatment to the generic companies. And we avoid non-launch or delayed launching of more powerful, more disease-killer innovator drugs into the country.

On another note, I checked google for the topic, "drug price control Philippines" last October 4, 2011. I was surprised by the result: six of the top 10 articles on page 1 were my papers. 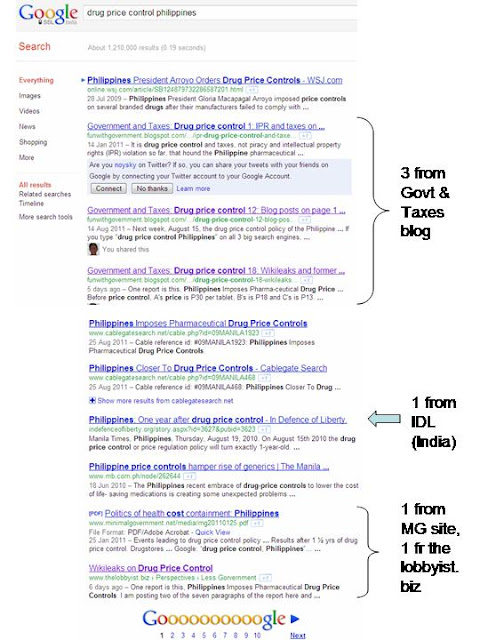 Today, I checked google again for the same research query, there is a slight difference. Only four of my papers landed in the top 10 articles, as wikileaks stories became more prominent. 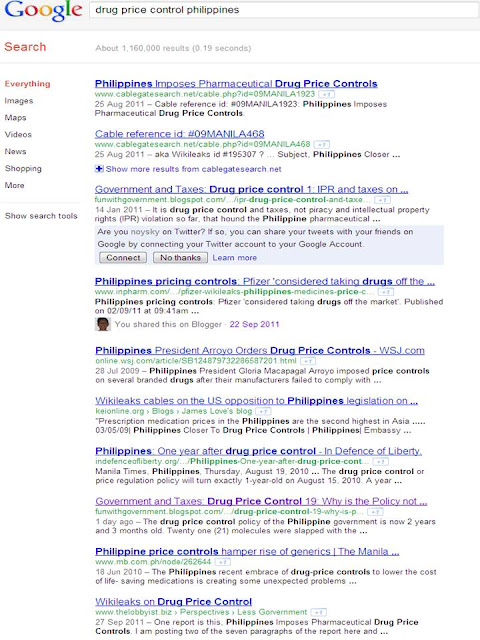