Drug Price Control 19: Why is the Policy not Withrawn Yet

The drug price control policy of the Philippine government is now 2 years and 3 months old. Twenty one (21) molecules were slapped with the policy that became effective in mid-August 2009. I still have to see any official assessment paper by the Department of Health (DOH), or by Congress, or by other groups and NGOs, saying that the policy was really necessary to make certain drugs become more accessible to the poor. Most if not all of the literatures that I have encountered -- from multinational pharma, local pharma, hospital associations, pharmacists association, medical association, drugstore associations, etc. -- say that the policy was unnecessary at the start and its continued implementation is a failure in its avowed goal of making essential drugs become more affordable and more accessible to more and more people.

During the 2nd Generics Summit sponsored by the DOH last September 7-8, 2011, held at Richmonde Hoel in Eastwood, Quezon City, one of the speakers was Mr. Tomas Luke "Beau" Agana, President of the Philippine Chamber of Pharmaceutical Industry (PCPI), also the President and CEO of Pharex Health Corp. PCPI is the federation of mostly or wholly Filipino generic drug manufacturers and distributors/drugstores, with more than 120 member-companies.

Beau gladly shared with me the powerpoint he presented during the 2nd Generics Summit. See my earlier discussion about the Summit, along with my photo with Beau and other activities here, IPR and medicines 12: Expanding generics.

Below are six of the slides showed by Beau, citing the cases of 3 molecules: amlodipine (anti-hypertension drug), simvastatin (anti-high cholesterol drug) and co-amoxiclav (anti-biotics). 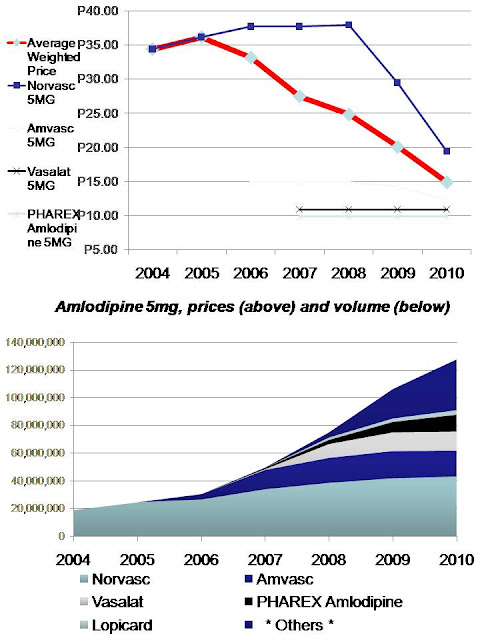 The figures show that even prior to drug price control policy of August 2009, the average weighted price (total molecule value / total volume) and prices of leading brands of amlodipine were already declining. Pharex's amlodipine generic was already selling at around P11 vs. norvasc's P38. There were other generics that were already selling at around P8 even before the drug price control policy. As a result of declining weight average price (solid red line), sales volume of amlodipine 5mg was rising.

The same story for simvastatin molecule, below. 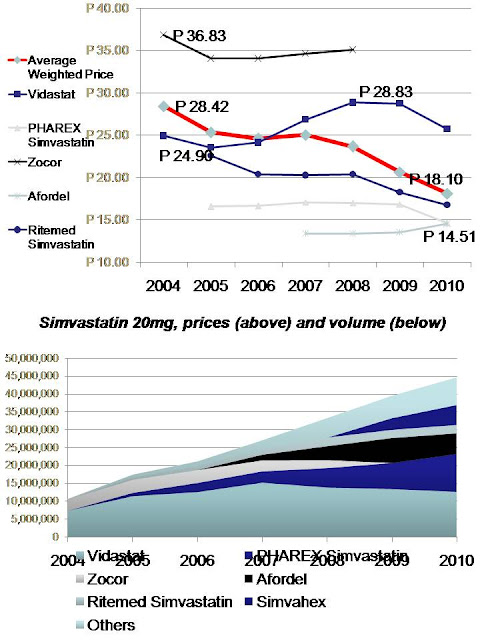 Even before the drug price control policy, prices of leading brands and the weighted average price were declining. The government's heavy price intervention only brought them further down faster. Volume also increased.

This is because simvastatin -- and almost all molecules slapped by the policy -- is/are already off-patent, so that more and more brands are introduced each year from more generic manufacturers.

Finally, Co-Amoxiclav molecule, below. Same pattern of declining prices even before the drug price control policy. 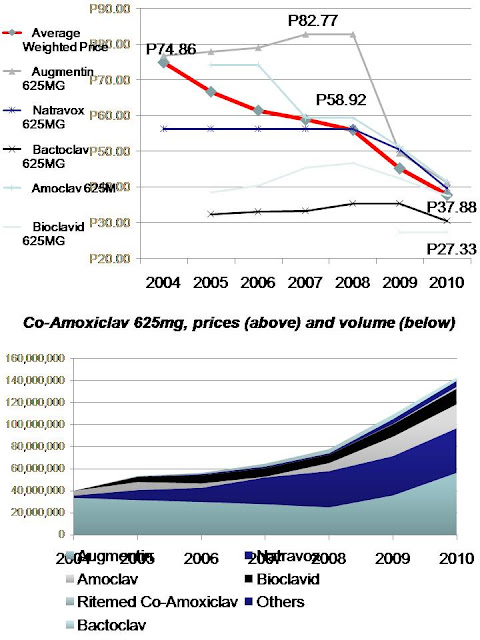 I will also use these data from Beau in the coming Asia Generics Summit in Taipei, November 19-21. I will speak there to talk about generic drugs from a consumer's perspective.

At face value, one may conclude that "Drug price control policy quickened the pace of price decline of those drug molecules; hence, the policy is correct." Partly true. But what is not shown by these and related charts, are the following:

1. Generic drugs that were displaced and pulled out from the market because their manufacturers could no longer bring down already low prices.
2. Potential generic drugs from more generic manufacturers who did not launch their products here because of the heavy-handed price intervention by the government; and
3. Potential innovator drugs from more innovator companies who did not launch their more revolutionary, more powerful drugs here because of the same price intervention by the government.

Besides, the trend of declining prices was already there before the policy was imposed. There was healthy competition among innovator and generic companies already, each player targeting its niche market and location. Different prices for different brands targeted for different consumers.

I am still wondering why the DOH is not withrawing the policy. Could it be pressure from some influential officials of the Liberal Party, the party in power? Former Senator Mar Roxas, LP President, was the main pusher of the policy way back in early to mid-2009, just a few months before the May 2010 elections. Or other factors?

But the sooner that the DOH will withraw that policy, the sooner it can rectify the damage to the business environment that it has created. Right now, there are many emerging or re-emerging diseases which have no medications yet. Like dengue, various types of cancer, there are no existing vaccine against them yet. The price control policy has mainly targeted the innovator companies -- and adversely affected the local generic companies in the process. Some innovator companies outside the country should be having second thoughts coming in because of the price dictatorship policy imposed by the past administration, but continued by the current administration.
-------