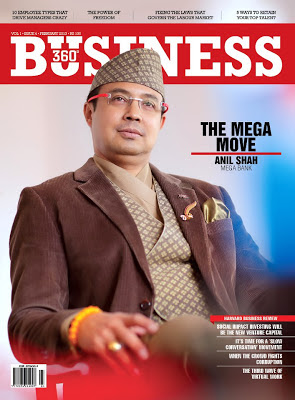 Power outages of 12 hours a day or more  is one formula for slow economic growth if not economic contraction. Almost all aspects of modern life, industrialization and agricultural modernization require stable and affordable electricity.

When Charu Chadha informed me that Kathmandu suffers from 14 hours a day of power outages in  early January and is projected to rise to 18 hours a day in the coming weeks, I was greatly surprised.  It is simply impossible to create more jobs, to develop the economy faster, if there is no stable and affordable electricity to supply the energy needs of households and companies.

The Philippines also suffered power outages of about four hours a day on average sometime in 1991-92 and it resulted in a lot of economic and political instability. What the new administration at that time did was to get some private power companies to produce electricity at the soonest possible time at high rates with long term contract. Expensive electricity from power barges were brought in within months. Power black outs were slowly addressed but electricity rates have increased.

The public adjusted to the higher electricity bill per kWh and made some adaptations like energy conservation and using more efficient and low wattage bulbs. Shops and companies that must remain open and lighted for many hours a day have no choice but endure the higher monthly electric bill. Later  the power outages slowly disappeared. Besides, such rates are still lower compared to buying and maintaining power generator sets that are not only noisy but also very costly as they are powered by gasoline or diesel. 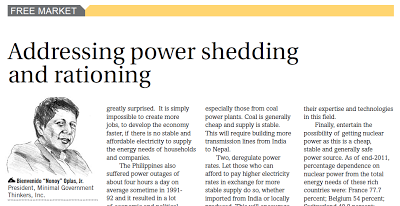 From an outsider looking in, here are some lessons that may be considered by the Nepal government and other sectors of society.

One,  facilitate and hasten more power imports from India especially those from coal power plants. Coal  is generally cheap and supply is stable. This will require building more transmission lines from India to Nepal.

Two, deregulate power rates. Let those who can afford to pay higher electricity rates in exchange for more stable supply do so, whether imported from India or locally produced. This will encourage faster construction of more power generation plants and transmission lines. Those who can afford higher rates from new power plants will get out, partially or fully, of the old power plants, leaving the latter some respite to serve the poorer sectors that want the old, cheaper rates.

Three, privatize some power plants that produce more losses than revenues for the government, sell to private power companies in a competitive bidding. Such privatization should be coupled with industry deregulation, at least the power generation sector, to encourage more competition among various players.

Four, reduce the requirements, bureaucracies, taxes and fees for companies putting up new power generation plants and transmission lines.  Invite more power supply companies from many countries to enter Nepal and put up more power generation and transmission infrastructures over the medium- to long-term.  Norwegian and other Scandinavian power companies are generally efficient producer of hydro power plants as they are largely dependent on hydro power from huge amount of water from melting ice after winter. Nepal can benefit from their expertise and technologies in this field.

Hydro-dependent Norway buys power from Sweden during winter when rivers and lakes are mostly frozen and the hydro power plants are resting. After winter, Norway exports electricity from its many hydro power plants to Sweden and other neighboring countries in northern Europe.

Nepal has a huge potential for industrialization and can retain its high profile mountaineering tourism. These must be sustained if not boosted, by easy availability of stable and cheap energy.

Also, Korea is an affluent country with a high standard of thesis writers living. There is virtually no urban poverty or violent crimes.

Thanks for sharing your tips with us. You shared a detailed post about economics. This is an informative post. I really liked this post. I appreciate your hard work. Get help from buy dissertation online , a No.1 writing company UK.

Excellent job. I am delighted to see your hard work. You have amazing writing skills. Thanks for sharing your knowledge with us. Get help from dissertation writing services , a distinctive writing company UK.