Our regional and global health alliance, the Emerging Markets Health Network (EMHN), has republished a paper that was released February 2012 by the Free Market Foundation (FMF) of South Africa. MG Thinkers was a co-publisher of that paper.  See here,  Free Trade 24: Trade and Improving Health Outcome (February 15, 2012). 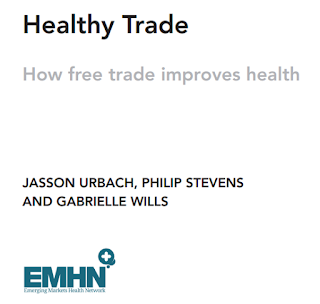 Here is the paper's Abstract::


A recurrent theme of the academic literature and wider public discourse is that free trade harms the poor by promoting economic inequality and insecurity, polluting the environment and making processed foods more widely available. All of these factors are deemed to be deleterious to health.

However, there has been little empirical evidence to  support these assertions, in particular the relationship  between free trade and health. This is an important relationship, as it tells us more about the effect of economic policies on human welfare than bald statistics related to GDP...


Contrary to much of the literature, our analysis finds that free trade does in fact promote better health outcomes, with the relationship particularly pronounced for lower-income countries.

There are two mechanisms that might be responsible for this relationship. On the one hand, trade promotes economic growth, which in turn provides greater sums for individuals to improve their living conditions and for authorities to spend on public health measures such as sanitation and universal vaccination. Another mechanism is ‘knowledge spillover’, wherein international trade increases the global diffusion of both knowledge and products that improve health -- ranging from the basics of germ theory to modern pharmaceuticals and medical devices. 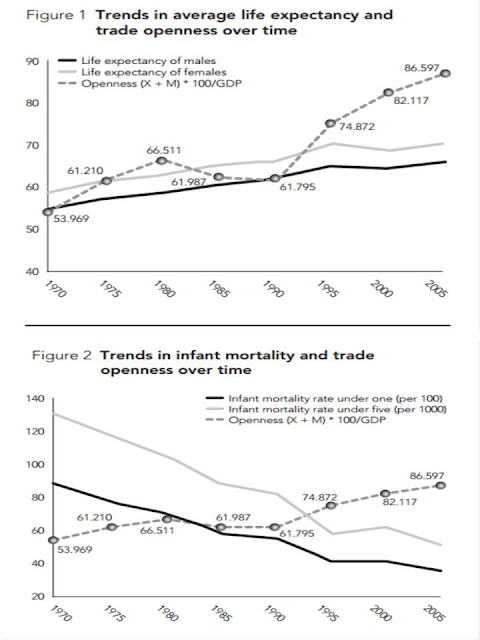 oh, so reading it i learned that it was fixed effects, should should help some, but its still possible that something weird is going on. its probably a better idea to us IV anyways for trade openness.