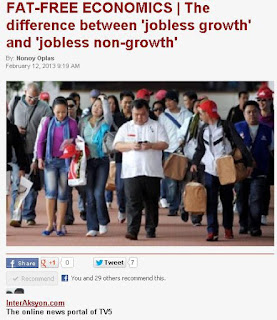 One of the never-ending criticisms of the country's recent economic performance is that it was a “jobless growth” or “elitist growth." The people who say this refer to the lack of sufficient jobs created in the economy and hence point to further social inequality.

Last week's column has attracted similar skeptical comments in social network sites, such as “growth for the rich”, “what growth, growth of the urban slums,” “gobbledygook growth,” and so on. Perhaps it is a case of people being too mired with slow growth in the past, that faster-than-expected economic expansion has become unfamiliar and even uncomfortable for them.

There are valid and invalid reasons and premises for such statements. But before we enumerate these premises, let us review some of the latest GDP growth figures for key economies. This is from The Economist magazine, which conducts a quarterly pool of some of the world’s biggest investment banks and rating companies about their GDP and other macroeconomic forecasts, tabulate those forecasts and get the average. 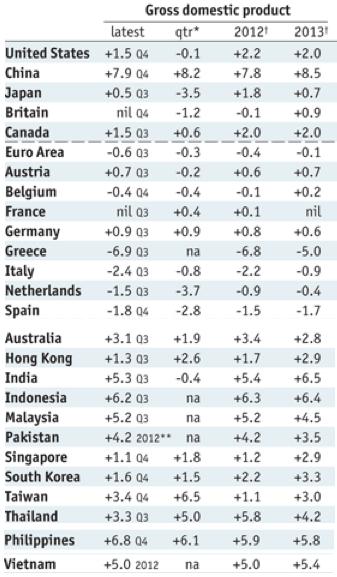 The Philippines’ full year 2012 growth of 6.6 percent is nearly a percentage point higher than the 5.9 percent projection. A week before that and prior to the announcement of the fourth-quarter 2012 GDP growth, the average forecast for full-year 2012 by The Economist was only 5.5 percent. This is a bit unusual because in most cases and in many countries, actual numbers are about +/- 0.5 percent maximum divergence from projections, the Philippines’ is 0.7-1.1 percent higher than the average forecast.

If the Philippine economy grew slow, like Hong Kong and Singapore’s 1-1.3 percent third-quarter growth, or even contracted to -1.5 to -6.9 percent like what happened to the Netherlands, Italy, Greece and Spain, the complaints of “jobless growth” may have turned into a remark like “jobless non-growth” -- a not-so gratifying situation. See this graph for instance, showing the big disconnect between expectations of stock market growth and GDP growth this year.

The European Central Bank simply threw money at almost everything while the fundamentals remained gloomy. Expectations like these in such a big continent like Europe can drive some if not many businesses there to head out for other more promising economies. The Philippines should be one of those emerging markets where their financial radars are currently directed.

So, can “jobless growth” really happen and is it theoretically possible?

Yes, it is a theoretical possibility and can happen if the number of the employed people has remained the same while the output of enterprises has increased due to higher productivity (more automation, improvement in production processes, more personal motivation) and the number of people in the active labor force has increased. There were no net job losses that occurred, it is just that the new entrants to the labor force were not absorbed and hired mainly by the formal sector.

The next question will be thus: Is this happening in the Philippines now?

There are mixed signals based on the latest labor force survey (LFS) data as of October 2012. Compared to October 2011, the unemployment rate was higher at 6.8 percent last year compared with 6.4 percent in 2011, and the number of unemployed people was 2.76 million in 2012 compared with 2.64 million the previous year.

An improving overall economic condition also produces job seekers with rising “reservation wage” For instance, they are offered a monthly pay of P20,000 but they did not grab it because they are waiting for a possible job call that will give them a P25,000 monthly pay. So when the LFS was conducted during that period, they were still unemployed, as argued in an earlier column.

There are valid and invalid criticisms of a “jobless growth” phenomenon, actual or imaginary. Perhaps the quickest way to dispel this is for the government to encourage more self-employment or entrepreneurship among the people. If some people harbor a high reservation wage for long, the rational thing to do is for them to employ themselves.

This will require that government must reduce certain procedures, permits, taxes and fees for people to start and maintain a business. Credit is relatively easy these days with interest rates at very low levels. The 91-day Treasury bill rate -- the benchmark for loans -- is down from about 4 percent just three years ago to the current 0.05 percent.

There is a need to sustain the overall economic optimism in the country. People abroad are beginning to see it, but Filipinos have yet to feel it.