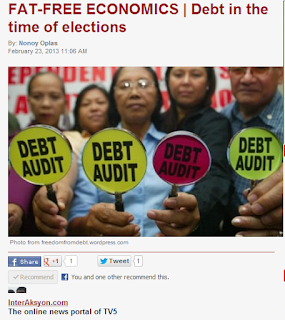 The outstanding debt of the Philippine government has breached the P5 trillion mark sometime in March 2012. By the end of last year, the debt was P5.437 trillion. This means that on average, each of the 96-plus million Filipinos as of that period had a per capita debt of about P57,000. Not a good figure to hear.

Aside from the outstanding debt, there is also the guaranteed debt or “contingent liability” that is not part of the former yet, but if the indebted GOCC or GFI (government financial institution) cannot pay the debt guaranteed by the national government, it will migrate to the outstanding debt and hence, will be paid by the taxpayers through present taxes and fees, or by future taxpayers through new debts. At end-2012, guaranteed debt was half a trillion pesos.

The national outstanding debt is rising by about P1 trillion every four years on average, according to the Bureau of Treasury.

The distribution of the rise and fall of the total debt yearly is uneven. The first four years of the Arroyo administration, 2001 to 2004, were marked by a huge jump in the outstanding debt, which mainly implied heavy borrowing. Those years were also marked by political instability due to the various political scandals and impeachment moves against President Arroyo and the presidential elections in 2004.

The next three years were characterized by low growth or even contraction in the outstanding debt, only to pick up sharply again by 2008.

*Author's computation based on Bureau of Treasury data.

The big jump in outstanding debt in 2012 did not seem to look consistent with the high GDP growth that year, unless one will argue that such fast growth was made possible by heavy government spending in important social and economic activities, which is debatable.

Nonetheless, the economic optimism should be seized by the Aquino government to drastically cut its borrowings and reduce the outstanding debt. Finance programs with existing tax revenues and encourage more private sector involvement and risk-taking in both hard and social infrastructure development.

In the normal life of the average citizen, debts and other obligations are paid during the good harvest years so that when the bad harvest comes, the debt stock is low or manageable enough. This convinces lenders that the borrower is prudent and responsible enough not to court financial disaster in the future due to ever-rising debt, whether or not harvest is good. In turn, the borrower is charged low interest rates and afforded longer payment terms and debt refinancing.

The opposition is expected to seize on this ever-rising debt, both total and per capita, as an election issue against the administration. And rightly so because to tell voters that even their young kids have a per capita debt of nearly P60,000 would evoke disappointment if not anger at the administration. The latter should therefore assure the public that this ever-rising debt phenomenon has to stop somewhere, and as soon as possible.

Let us hope that this year would be the start of a reversal of this ugly debt rise momentum. 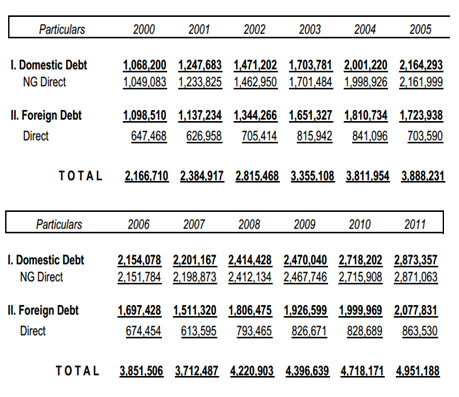