Inequality 16: Oxfam and the Politics of Envy

Social inequality is a result of diverse ability, efficiency and motivation of people. Those who are more creative and innovative in producing more output from limited resources will earn more than the others.  And those who are more motivated, more ambitious in producing something that is so innovative and revolutionary, and they later become successful, will also become more wealthy than the rest of society.

So the wider the gap of efficiency and motivation among people, the wider the inequality becomes. Forcing equality among people in society as is done in socialist countries tend to produce more poverty than wealth. This happens because by penalizing creativity and efficiency and subsidizing irresponsibility and inefficiency, the system of economic rewards and punishment is corrupted. If people can eat even if they do not work, why should they work hard, or even work at all. 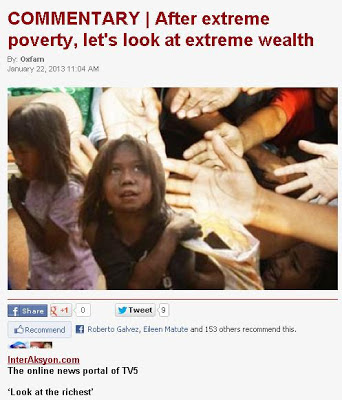 There was a long article by Oxfam last January 22, 2013, After extreme poverty, let’s look at extreme wealth arguing that extreme inequality is “economically inefficient, politically corrosive, socially divisive, environmentally destructive, unethical, not inevitable.” So they propose to “end extreme wealth by 2025, return inequality to 1990 level.”

To realize their goal, Oxfam is proposing more “regulation and taxation… Limits to bonuses, or to how much people can earn as a multiple of the earnings of the lowest paid, limits to interest rates, limits to capital accumulation… progressive taxation, cracking down on tax avoidance and tax evasion... Closing tax havens…  a globally agreed minimum rate of corporation tax.”

The politics of envy implicitly embedded in these advocacies does not recognize the benefits to humanity produced by the super rich. Among such people are Microsoft founder Bill Gates, facebook founder Mark Zucerberg,  google founders Larry Page, Sergy Brin and Eric Schmidt,  and youtube founders Chad Hurley, Steve Chen and Jawed Karim.

Have these people helped create economic inefficiency, political corrosion, social divisiveness and environmental destruction in the process of their giving us facebook, google, youtube and Microsoft? So that their excess wealth and privileges should be subjected to extra taxes and regulations by governments? This is a doubtful if not mistaken assertion.

Here in the Philippines, multi-billionaires Henry Sy, Gokongwei, Lucio Tan, the Ayalas and many others have become super rich not only because they founded or developed businesses that were patronized and deemed useful by millions of Filipinos like SM, Robinsons, PAL, Ayala Land, Globe, Smart, and other big businesses.  In addition, they do not have enough competitors because of Constitutional limitations and prohibitions on foreign equity ownership on certain sectors of the economy.

There is nothing wrong with being a multi-billionaire if this is achieved through useful invention that benefits humanity. Actual examples are the discovery of facebook, google and youtube.  Take also this hypothetical example.

Supposing a bunch of science geeks and nerds make a grand ambition to create or invent a rice or potato variety that is packed with certain nutrients and vitamins that will improve or boost its consumers' immune system against certain infectious diseases. It is like an indirect vaccine against certain diseases minus the injections. Various laboratory and clinical trials prove that their invention was successful -- safe, effective, no negative side effects, etc. Their rice and potato variety has become a worldwide hit, the geek inventors are selling their rice at P100 per kilo equivalent, and millions and millions of people worldwide are buying their rice, the geeks became super-super rich, they became multi-billionaires.

By simply inventing products and services that are proven to be useful to people, rich and poor alike, these businessmen have already done their part in helping humanity.

This is wrong. There are many examples that very rich people voluntarily give away their wealth to the poor, at their chosen projects, programs and terms, not as dictated and prioritized by government politicians and officials.

The Bill and Melinda Gates Foundation (BMGF) gives away $4B a year on average, perhaps in perpetuity, for health charity alone. If  Bill Gates' money was confiscated early on by the US government due to envy or simply because it is a "sin" to amass too much wealth, that foundation's money and global health initiative would not have been possible.

There is also this interesting story of a “nomad billionaire”, Nicolas Berggruen, who as of mid-2012 has a £1.5 billion fortune but plans to give away half of his wealth. He has bought £881m stake in Burger King but he owns no house, no car, not even a watch and carries things in paper bag when he travels.

Class envy and resentment should be curtailed and people should not be penalized for their success. When some people become very rich, their wealth pale in comparison to the greater wealth enjoyed by humanity as a whole through the higher standard of living that the inventions and production of the rich have enabled.

Profit from successful businesses are not hidden in cabinets or idly parked in banks for long. Those profits are reinvested and plowed back into the national and global economy either by expanding the business and hiring more people, or by buying and consuming various products and services, which support other businesses that also hire other people.

If we want prosperity for as many people as possible, allow the producers to produce more, the innovators to invent more, the job creators to hire more. Make things easy for them, do not allow the politics of envy via more regulations and taxation to expand endlessly.
----------