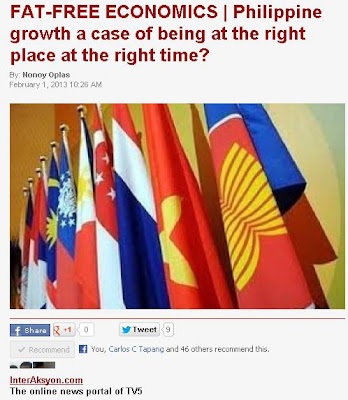 In November 30, 2012, this column made a rather bold statement about the economy for the fourth quarter of that year.
The National Statistical Coordination Board (NSCB) yesterday announced that fourth-quarter growth came in at 6.8 percent, or just 0.2 percent shy of the forecast.

This is one advantage of being a neighbor to faster growing economies. Even if political and economic governance in the home country is not that good, overall economic activity will be pulled up by the more dynamic neighbors through regional trade, investments and tourism. In the case of the Philippines and its neighbors in North and Southeast Asia, they seem to be pulling each other up.

The phenomenal economic expansion of the planet’s two most populous countries -- China and India, with a combined 2.5 billion population -- is a good example of how they have helped expand demand for goods and services exported by their neighbors in the region. Below are two tables showing the phenomenal economic expansion of many Asian emerging economies in just two decades. Purchasing power parity (PPP) valuation of gross domestic product (GDP) is used instead of the usual nominal GDP to correct for hyper valuation of goods and services in many rich countries. 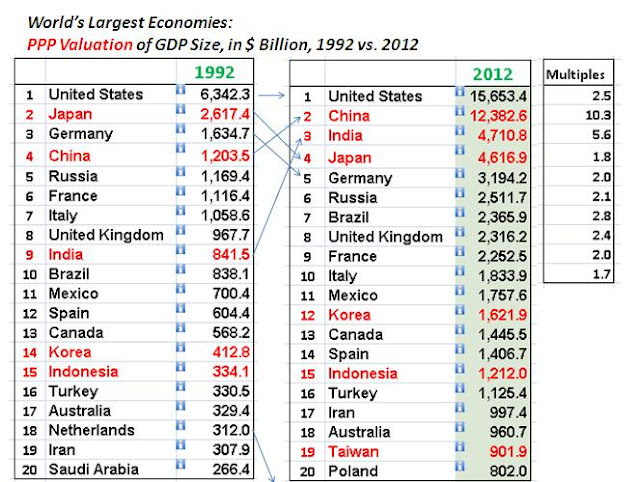 In just two decades, China’s economy has expanded 10.3 times from its 1992 level, while India has expanded 5.6 times over the same period. In contrast, the rich European and US economies have expanded only between 2-2.5 times.

The table below shows the expansion of a bigger set of Asian emerging economies: 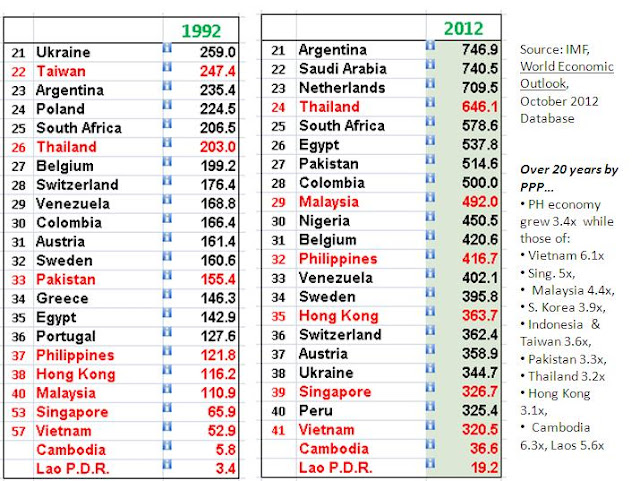 There are several important implications of the above numbers.

One, many Asian economies increasingly are becoming the “growth anchor” for the rest of the world economy. Expanding wealth and consumer purchasing capacity in Asia creates additional demand for other economies' goods and services exports that may balance between anemic growth and stagnation, if not contraction.

Two, big population is generally an asset as the economy has more consumers, more workers and more entrepreneurs. This is clear in the cases of Japan Indonesia, India and China, countries with populations of 127 million, almost 250 million, 1.2 billion and 1.3 billion, respectively. Among the reasons often cited by investors who put their money here is that the Philippines has a big and young population that can easily be trained with new and changing skills.

Three, intra-Asian merchandise trade and people mobility greatly help integrate their economies and in the process, pull each other up economically.

So in the absence of really globally or regionally disruptive events like war or huge fiscal collapse of the major European economies, the “default mode” is continued expansion of many Asian emerging economies like the Philippines.