The European Union (EU) is perhaps the biggest bureaucracy in the planet on a per capita basis. The bureaucracy's penchant for almost all sorts of subsidies, welfare and regulations is costing taxpayers from member countries lots of money.

While the EU is imposing certain fiscal "disciplines" like the budget deficit of member-economies should not be more than 3 percent of GDP on any given year, I think almost all governments of member-countries, except Norway, have regular budget deficit. Meaning they live beyond their means; they spend more than their annual revenues (taxes, fees, etc.). 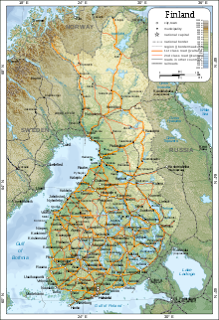 Now many voters of Finland have supported a political party with harsh words against the EU, against the additional bail-out money to Greece and Ireland, and against heavy subsidies to many refugees. The voters are saying that they've had enough of more fiscal irresponsibility, of bailing out highly fiscally irresponsible governments like those in Greece, Ireland and Portugal.

There is one good news report today in NYT, Finland’s Turn to Right Sends Shivers Through Euro Zone
By SUZANNE DALEY and JAMES KANTER
Published: April 21, 2011

Mr. Soini... who is 48 and has been active in politics since he was 17 — repeatedly lashed out at the European Union. (He is fond of calling it “the heart of darkness.”) A true democracy, he has said, is “only possible in individual states.”

“Soini talks ordinary language with ordinary words,” said Ville Pernaa, the director of the Center for Parliamentary Studies at the University of Turku in Finland. “He told the voters that they were wasting money paying for other people’s debts. Why should they pay for that when we need more doctors in the small towns of Finland?”

Perttu Pouttu, a retired worker for a Helsinki energy company... “Of course the bailouts raise questions,” he said. “Will we get that money back? Where are the banks? This is their problem.”

At the same time, Mr. Pouttu said he was worried that Finland had admitted too many refugees. “It does not touch me personally,” he said. “But it bugs me that by law we have to give them apartments. When I retired, no one gave me an apartment.”

Mr. Soini, leader of the True Finns Party, may be urged to soften his attack of the EU and the proposed additional bailout money for some highly troubled European economies. But if he does so, then the voters who supported him and his party may get angry too.

It is a good start that a small but rich country like Finland will remind many European governments and the EU bureaucracy, that fiscal irresponsibility and ever-growing government size is wrong.
Posted by Bienvenido Oplas Jr at 12:16 PM

So informative things are provided here, I really happy to read this post, I was just imagine about it and you provided me the correct information I really bookmark it, for further reading, So thanks for sharing the information.
orlando bail bonds

Fantastic post.I am quite impressed! Incredibly useful facts especially the first part. I was looking for this particular facts for a years. I really enjoyed reading your post. Thank you.
bail bonds orlando

Important blog having interested information. Few times we ignore this sort of things & also suffer a lot as well. How ever we all can save a lot with the assistance of these all tips.
bail bonds orlando fl

That is really fantastic and exciting to read your thoughts as I have the same point of view on all the subjects. It is really awesome.
bail bonds orlando fl