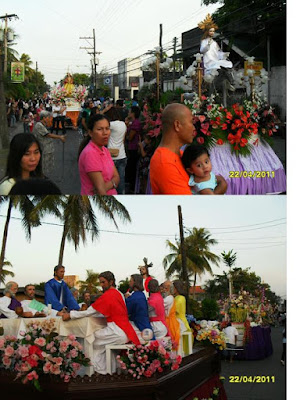 I took the succeeding pictures last Good Friday, April 22, 2011, in one barangay of Lapaz district, Iloilo City. My in-laws live in Lapaz.

They have 2 groups of procession. The first is the group of the Independent Catholic or Aglipay. Their number is not so big but they have many carriages of the different statues of Jesus. The lower picture here for instance is a big carriage portraying the Last Super. 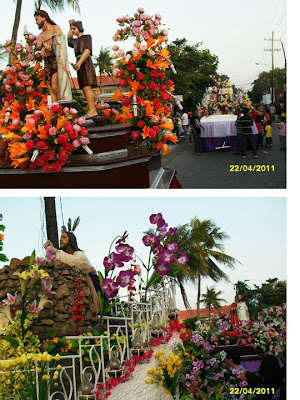 The flower decorations of the carriages and statues are beautiful and very colorful. Devotees really spend time and money to produce a beautiful procession. It should reflect their religious faith.

I took these pictures as they were still assembling for the procession that would start at 6pm. Those carriages have big and bright bulbs to lighten Jesus’ statues when the procession would drag by evening. 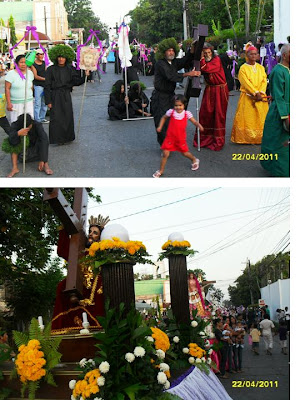 A group of devotees in black wardrobe and carrying various symbols of Jesus. Note the old man in maroon wardrobe, with thick moustache and long hair. He would look like Jesus and would be carrying a huge wooden cross.

They would be following the carriage of Jesus carrying the huge cross. 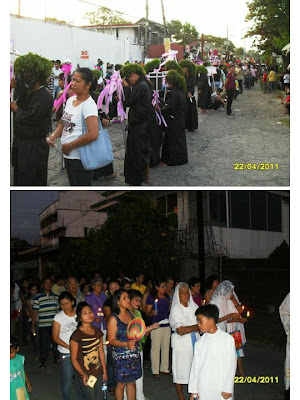 A group of mostly senior women who recite certain prayers and novena as they walk. 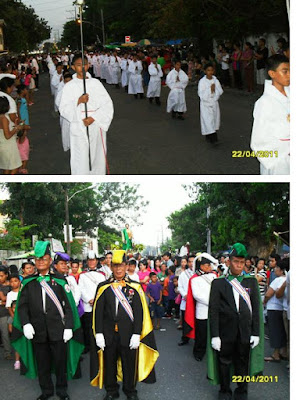 This is the head of the Roman Catholic procession. Young boys in white dress, walking in praying position.

They would be followed by some senior men in dark suits with colorful addendum to their attire. Turned out that the man in the middle was one of our wedding sponsors  I did not immediately recognize him, he approached me after I took the picture, and I bowed before my Ninong. 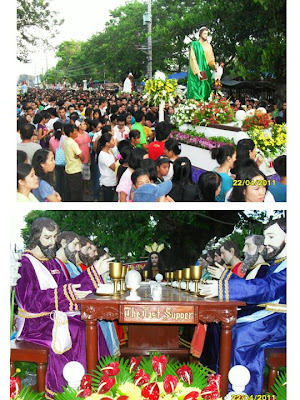 The Roman Catholic really pack with tens of thousands of devotees and participants. The procession has not started yet, but the crowd was so thick, it was difficult to pass through. I think many have been standing there since 4pm or earlier and waiting for the procession to start.

Another huge carriage of the Last Super. This was put in a small truck. 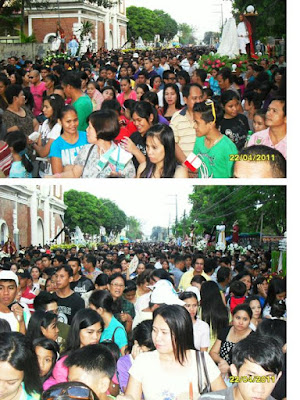 I don’t know, I may be wrong because I did not see the other processions in other cities and provinces. But the huge turn-out in the annual procession during Good Friday shows how strong the Catholic religion is in many parts of the country.