The use, transport, marketing and trading of "illegal drugs" is a serious crime in many countries around the world. Violation, when caught, can lead to severe penalties, from long imprisonment up to execution.

(this picture from www.thegooddrugsguide.com) Such illegal drugs like codeine, heroine, demerol, etc. Well, I haven't tried any of them, never been a drug user or drug dependent. But from what I gather, those drugs can cause their users to be "out of their normal selves". Some would look and act like idiots, while some can cause physical harm on themselves or to other people.

High alcohol use can also have the same or even worse effect on the users. I've experienced heavy drinking during parties with friends in my younger days, and I've experienced near-death incidence before, like drunk-driving and nearly falling on a deep creek. Or being robbed by muggers while asleep somewhere else due to heavy intoxication.

But alcohol is allowed but certain drugs are not. Both can cause harm to users and other people. Why the double standard?

Anyway, the 3 Filipinos convicted of drug smuggling in China have been executed today. It's a high emotion, high media exposure case here before the final execution. While the victims and their support groups have various reasons to say that they were not real drug smugglers, the government of China was only implementing what it has enacted into law. In a sense, China's government only promulgated the "rule of law" in their own country.

Could the Chinese government possibly have granted some "clemency" and reduced the penalty for the 3, as lobbied hard by the Philippine government through Vice President Jejomar Binay?

My friend from the DFA said the answer was a possible Yes. The problem was the heavy media exposure in the Philippines. There are back channels always in major cases. But China would not be happy to hear if people will say, "Pressure by Philippine media caused the Chinese government to reduce the penalty for the 3 convicted drug traffickers." In a sense, the louder the media noise here, the stronger the resolve of the Chinese government to proceed with the execution. Which is what exactly happened.

Many laws are irrational and oppressive, whether in the Philippines or abroad. If we are strangers or aliens in foreign lands, it is always safe to obey those foreign laws, no matter how harsh they may be. If we think they are too harsh and too barbaric, then don't go to those countries. Go to other countries where the laws and political culture are something that one can live with.
--------

With expanding globalization, including the globalization of criminal activities, the public's perception and expectations of the role of certain government agencies like the Department of Foreign Affairs (DFA) evolve.

The same friend of mine from the DFA whom I indirectly mentioned in Illegal drugs and execution commented to my article. He wrote,

What is important is for govt to be allowed breathing space to do its duty, instead of the whole world being incited to breath down its neck. There are things that can only be done quietly. But the culture of distrust and inciting the public to hate the govt for its "inaction" would often make it impossible for positive results to be achieved. Pnoy sent a letter to his counterpart about the three. That is the highest action a country can take. We had the VP go to China. These are very concrete actions. And yet, some sectors accuse Pnoy and the govt of not doing enough.

I agree with my friend from the DFA. The planned execution then was a decision by a foreign government, China, not by media or individuals in China. Thus, the most appropriate action given the circumstances then of high public discourse on the saving the 3 convicted Filipino drug traffickers, was a government to government negotiation.

Personally though, I think the RP government should have never negotiated with its Chinese counterpart on those executions. What if another group of Filipinos will be caught and prosecuted on drug trafficking in Malaysia, another VP Binay trip to Kuala Lumpur? Another group of Pinoys on drugs trafficking case in Norway, another Binay trip to Oslo? Do we taxpayers pay and pay for those many foreign trips to save not-so-responsible fellow Filipinos?

People should be responsible for their actions. They should be accountable for whatever negative consequences of their actions, it has nothing to do with their own government. They know that drug trafficking is super-regulated and super-penalized in many countries, they should not even think of doing it, much less of actually doing it. When they are caught and prosecuted, they run to the DFA and the Philippine government, and when they are finally executed, it is the fault of the Philippine government for "not doing enough"? Where is personal responsibility there?


States do no want other states to execute their citizens. Citizens also expect their state to give them help - di ba may Public Attorneys Office tayo to defend the accused if they cannot afford to hire a lawyer.

I don't buy this, to relegate personal responsibility, that it's all government responsibility. Meaning some Filipinos can steal, kill and transport drugs in other countries, and when they are caught and penalized, DFA and Binay or P.Noy will be busy saving them?

What the RP government can do perhaps, is to advise ALL departing Filipinos, whether as tourists or workers or students abroad: "If you violate certain laws of the countries you are visiting, RP government may not save you. So, obey the laws there, the same way that you should obey the laws here." 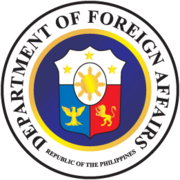 The main job of the DFA is to promote international trade, economic, cultural and political diplomacy, between the Philippines and the country where it has an office. Also to provide some economic intelligence to Philippine-based exporters. Stuff like, are the European consumers buying more Thai and Vietnamese fruits than Philippine fruits? Why? DFA should reward the industrious and those who obey the laws. If we assign or expect them with the ugly job of protecting each and every Pinoy law violators in other countries, then they will have no more time to promote diplomacy and international trade.

There are some proposals to increase the budget of the DFA, like having more defense counsels. I will be in favor of that, but not through higher taxes, but by cutting the budget of other agencies, like the bloated Armed Forces and Defense department (AFP-DND).

But there should be a limit to what the DFA legal counsels can do. Like helping OFWs in distress (raped by their employers, unpaid, over-worked, falsely accused, etc.) For drug traffickers, especially proven and convicted, they should not be government priorities. If they commit the same crime in the Philippines, RP law says they should get harsh penalty anyway, no difference. They should get their own private legal counsels to defend them.

About overseas Filipino workers (OFWs), it is wrong to say that it is a "government policy". Employment, local or foreign, is always a private contract between the employer and the employee, it is never a government contract. Since government is outside of this contract, the function and regulations of the POEA should be shrank significantly. More POEA regulatons means more bureaucracies, additional fees, additional transaction procedures.
---------