There are lots of climate data and graphs that are freely available on the web. And what's more, they are updated monthly or weekly, if not daily. The peddlers of "man-made warming" or its more popular cousin, "man-made climate change" cannot show those graphs and data because the data also say that there is such as thing as "global cooling" aside from "global warming." And that what we really have are "natural climate cycles" and not "unprecedented man-made climate change". 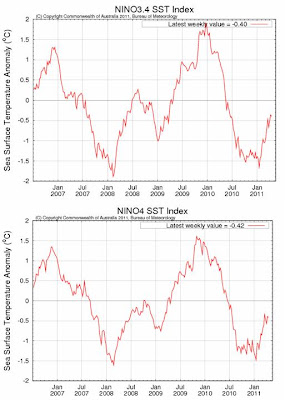 Here is the latest data on the status of La Nina in equatorial Pacific. Above is for Nino region 3.4, below it is Nino region 4. The sea surface temperature (SST) anomaly as of April 17, 2011 in both regions was still in the negative territory, around -0.4 C.

The current La Nina is now 11 months old, SST anomaly went negative in May 2010. Data/graph is from Australia's Bureau of Meteorology, http://www.bom.gov.au/climate/enso/indices.shtml 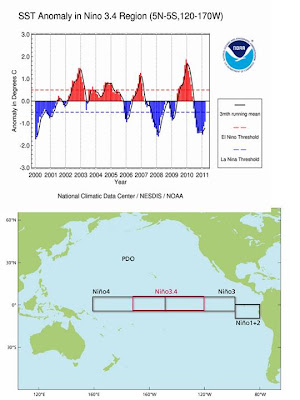 Lower graph shows the area where those Nino regions 1 to 4 are. Region 3.4 is the biggest or widest area, situated in the middle of equatorial Pacific Ocean. Nino 4 is the one closest to East Asia like the Philippines. These 2 graphs are from WUWT's ENSO page, http://wattsupwiththat.com/reference-pages/enso/. 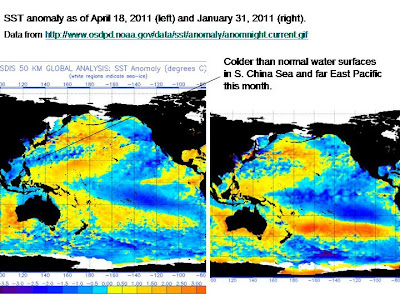 For those in the Philippines, Vietnam, Thailand, Indonesia and other parts of East Asia, they will notice the colder-than-normal (or colder than the average) breeze and air temperatures, especially at night time. Why?

One explanation could be that as La Nina slowly retreats from equatorial Pacific, the warmer-than-normal sea water that La Nina pushed down and showed somewhere else (like in South China Sea) is also slowly coming back. Data is from http://www.osdpd.noaa.gov/data/sst/anomaly/anomnight.current.gif. 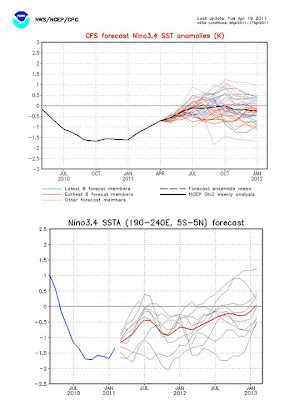 Forecasts: when will the current La Nina end? Upper graph is from CFS-NOAA as of this week. The various lines represent the various forecasts from different climate models. The black broken line is the average for all forecasts. They show that the current La Nina will persist until the end of the year and possibly beyond.

Lower graph is from Japan Meteorological Agency (JMA) and European Meteorological Organization (ECMWF). I got it from Joe Bastardi's No no El Nino (till 2012). The consensus or average forecasts say that La Nina will persist until end-2012 or beyond.

And why do we believe those far away temperature forecasts and guesses, when all weather forecasting agencies from all countries around the world that also use the latest and most sophisticated tools and techniques, cannot predict with high certainty the weather 3 days or 1 week from now? That is why the weather forecasts are updated and revised everyday, every 12 hours, or even every hour.
Posted by Bienvenido Oplas Jr at 12:57 AM