After posting Responsible Parenthood cannot be legislated, I got five comments, three at the Comments section, and two by email. Let me enumerate the five points.

1. One thing the sponsors and rabid supporters of this bill has not discussed is the actual cost of this bill, its impact on the fiscal balance (currently in historic deficit levels) and whether any future taxes are required. Hope you can have some numbers on this.

2. Good parenting needs to be legislated at the taxpayers expense by programs such as Positive Parenting which promote optimal parenting skills so obviously lacking. Damaged children are not productive citizens and become expensive casualties.

3. The RH Bill intends to help parents who already want to limit the number of their children; it does not tell them how many children to have. It is the population of our countrymen from classes C, D and E that continue to rise and they are the ones who need the services that government provides (through increased borrowing). I agree that responsible parenthood cannot be legislated, but irresponsible parenthood can be prevented through proper legislation.

4. Here is Reasons Why We Need the RH Law by Clara Rita Padilla of EnGenderRights, Inc., publication funded by the UN Development Fund for Women (UNIFEM). The 18-pages paper lists 11 reasons why: To respond to the clamor of the population who want the RH bill; To prevent unintended pregnancies; To prevent maternal deaths related to pregnancy and childbirth; To prevent infant mortality; To help individuals choose responsibly when to have children; To reduce abortion rates; To give rape victims a better chance to heal from their ordeal; To prevent early pregnancy and STDs among adolescents; To address the rising HIV/AIDS cases; To avoid the negative impact of large families on the poor; and To free women's bodies from politics and fundamentalism.

5. Nonoy, I think you are missing the point. The law is not to legislate responsibility it's to educate people and to give them access to devices so that they can exercise responsible parenthood. Cheers. -- Reiner Gloor, PHAP Executive Director (I am posting this comment with his permission)

My reply to the above comments: 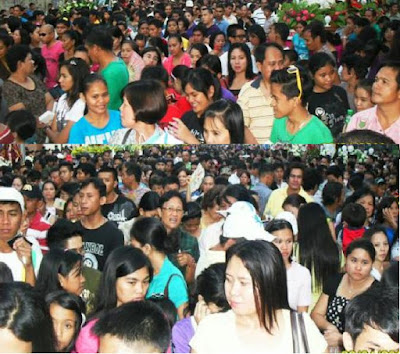 On #1. It is difficult to produce the estimates of how much the Reproductive Health, Responsible Parenthood (RH-RP) bill will cost. In Sec. 5, hiring of thousands of new midwives; In Sec. 6, creation of new hospitals in EACH province and city which have no hospitals yet, and for those which have ones already, to modernize them. These 2 sections alone would cost several hundred millions, if not billions, per year already. I am sure the various government agencies involved in the implementation should this bill becomes a law, have the numbers, but they should be hiding it now to the public. 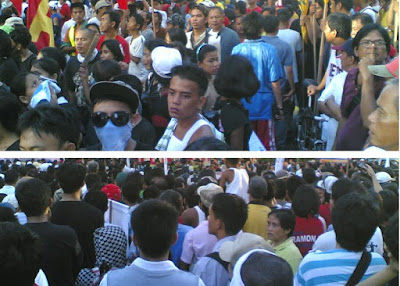 3. The government desire of limiting family size is implicit, not explicit. The most recent data, 2.0 percent RP population growth rate per year is deemed "too high" by international standards, thus the government, with cheering up from the UN, WB, WHO, other foreign aid bodies, is "urging" couples to limit the number of their kids.

The issue of "irresponsible parenthood can be prevented through proper legislation" is answered by my points above.

4. It seems that the RH/RP bill, when it becomes a law, is a panacea for all the 11 problems mentioned above, like prevention of maternal deaths, infant mortality, unintended pregnancies, HIV and STD, and so on. Government is a superman. It can stop and prevent all the mentioned problems. Really?

When the Department of Education (currently DepEd, previously called DECS, MECS, MEC, DEC, Dept. of Instruction, etc.) was created more than a century ago. the goal was to prevent high illiteracy, prevent high drop out rate among children, prevent low quality education, prevent early pregnancy via civic and good manners subjects, and so on. Did this happen?

If this happened as well as to other sectors, then those students would have been productive citizens many decades ago, and the need for expanded public education in the succeeding generations would have been reduced if not eliminated as people have become well-educated and self-reliant adults.

Educating couples about RH and giving them access to devices -- should government do this? These can not be done by other parents, various civic groups, corporate foundations, NGOs, church-based groups?

It is noticeable that there is too much focus on population size - economic growth link. Granting that this is true, which causes which? 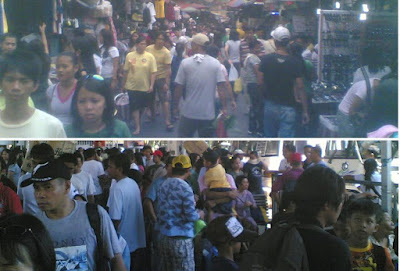 On #5. The above reply would apply here. I suggested to Reiner that there is BIG danger if we allow government to have another round of heavy intervention on the citizens' lives, down to the bedroom level. Many of those things that the RH-RP bill mandates can be done by the market, by civil society, by voluntary organizations. The pharma industry has already experienced the heavy hand of government when it unilaterally imposed drug price control.

In my essay last month, What is the role of government?, I wrote,

It boils down to only one important function: Promulgate the rule of law. Government has laws against killing, against stealing, against kidnapping, against corruption, against plunder, against carnapping, etc. Let government implement ALL of them, ZERO EXCEPTION....

What about the very poor? Who will take care of them?... if the poor will put up a vulcanizing shop, a barbeque stand, a barber shop, or plant kamote and pechay in vacant lots, or buy those farm products and sell in a corner stall, government should get out. Do NOT require these small and micro entrepreneurs to secure costly and bureaucractic business permit, barangay permit, sanitation permit, location permit, various other permits and pay lots of taxes and fees.

In short, if the poor will become industrious and would want to stand on their own, government should step back. If the poor will become lazy and steal, government should arrest them and put them behind bars. The rule of law says NO STEALING. It does not matter if the theft is the President of the country or a Congressman or the poorest man on earth. No one should steal, period. No ifs, no buts, no preconditions, no exceptions.

What causes poverty is heavy government intervention and taxation while not promulgating the rule of law. By enacting many restrictions and prohibitions on ordinary citizens but not applying the same restrictions to government people themselves and their friends. Poverty has little to do with high population growth.
Posted by Bienvenido Oplas Jr at 10:10 AM

Hi Noy, I agree with your final position on RH but for different reasons, ideologically and economically.

Emphasizing the benefits to the camote farmer is a clever way to push de-regulation. I actually have no problem with that though in the Philippine context, if such de-regulation benefits the bottom 10% of the population, that only impacts 2.4% of the economy. Its benefits in learning will be worth it for the nascent entrepreneurial society.

I am against de-regulation that allows excessive predatory behavior operating at the rentier level characterized by pure price taking behavior and that destroys the underlying economy. One of the key lessons from America in the ongoing financial crisis is that poor implementation of regulations over the last decade - for example, on the real estate lenders and on the shadow banking system - has cost the U.S. economy, if not the whole world by transmission, much more than that percentage.

Unfortunately, much of this loss - maybe unintended though I doubt it - does not have the benefit of transformation from 'creative destruction' due to innovation and productivity improvement. The loss to society came from pure financial sucker traps - a passing of the buck by transfer payments without an ounce of productivity - affecting those stupidly holding the bag when the crash occurs. Unfortunately, in this cases - like the real impact of inflation - it is the widows and your proverbial unempowered 'camote farmer' who loses the most.

In conclusion, I support your call for de-regulation, in specific legislation, to encourage entrepreneurship for the unempowered and to improve government productivity. I cannot support those de-regulation that opens up the economy to abuses - cartelization, unfair dealing, etc. - that ultimately enriches a few by connections and not by merit, that diminishes equality of opportunity over time, and creates an economy that cannot reinvent and renew itself. Of course, as usual, the devil is in the details.

p.s. I think that, ultimately it will be the continued success of countries like Germany, the Scandinavians, and China that work on different economic models that will put a brake to the ideological (and non-pragmatic) libertarian model being foisted on America by a noisy minority. They are already doing this in the emerging multi-polar world.

I think what we assume here is that the target population to whom the advocates apparently want to help are the same apathetic individuals who actually have more pressing issues such as hunger and illness. The majority of our population are aware of the different contraceptive methods.

Even if the services are made "super" available, to the extent that they envision, these same problems will still be noted if the people don't come to the Centers to avail of such services.

Good points Jed, thanks. There is too much emphasis on what "government should do" and little emphasis on what we ordinary citizens and civic groups can do. The usual "action by proxy" -- personal action to be proxied by government action, with the blind belief that government is made of angels who are not capable of committing abuses or laziness or irresponsibility.

"Poverty has little to do with high population growth" - the best line here!

With the abortion-inspired NGOs touting each of their grassroots in forlorn areas of the Philippines,conducting sterilization and sex education to women (and even men), training nurses to be advocates for death, and the AH(Abortion Holocaust)/ Sex Bill is unnecessary. It's trash, a wastage of money. Is this what was promised by candidates before as Universal Health Care? It hardly is. There are top 9 causes of death in the Philippines, for BOTH men and women. What does the govt intend to do with those suffering from them? Why concentrate on a bill that is mired with contradictions on many points? A bill budgeted at 3B - for women who can conceive? Something is fishy and not a lot of people are discerning that.

Hi Marvin, sorry that your comment was posted only today. It went to the "Spam" folder of blogger. I set the comments section as "unmoderated" but blogger sometimes arbitrarily put some comments in the spam folder. I saw the folder only today.

To your comments, the worst economic regulation we have are not those laws enacted by congress, but perhaps the Constitution. Smart/Pangilinan and Globe/Ayala are jumping with joy with the restrictions of the Constitution on utilities, which is bet. zero to 40% max foreign equities. Now the telecom industry is just a duopoly, a bad signal for us.

With the heavy public debts of Germany, France, UK, Italy, US, Canada, and I think also Sweden, there is no way for them to grow dynamically unless their governments and people would learn to live within their means. More and more of their revenues are eaten away by interest payment alone.

Hi BKOH, Yes, the top killers in the Philippines are not maternal death or abortion or related cases. The top 5 killers are diseases of the heart, brain dysfunction/stroke, cancer, pneumonia and tuberculosis. And these are all mainly lifestyle-related diseases. Again, there is no point for government to come in with huge health budget to "fight" these diseases because these are mainly "self-inflicted" diseases.

We still have to go back to the "personal and parental responsibility" aspect of healthcare, and less on "government responsibility."

In Singapore, filial piety is legislated. There is something called the Maintenance of Parents Act.