Theoretically, it is possible to have 3 or more kids and be an irresponsible parent. Why? government has feeding program, it has free education from elementary to high school, and cheap/highly subsidized uninversity education, even free if one is a government scholar; there are lots of mass/social housing, there are free medicines, free healthcare for the poor, cash transfer for the poor, agrarian reform for the poor, and so on.

One adverse effect of all these nannyism is the corruption of parental values. Why assume more parental responsibility when there are lots of government responsibility that are already in the laws and are regularly budget every year? So drink and party as often as possible, smoke as many cigarettes as much as possible. If their internal organs get dilapidated, they can run to the state because "health is a right".

Most problems related to high unemployment, high poverty, are caused by government through bureaucratism, high taxation, lots of prohibitions and regulations. Corruption is just an icing on the cake.

Take this report, Doing Business 2011: Philippines produced annually by the WB and IFC. For average companies in the Phlippines: To start a business, it will take 15 procedures (with various government agencies) in 38 working days, costing nearly 30 percent of the per capita income. Take note that the assumption here is zero corruption. If certain bureaucracies will insist on getting bribes, otherwise the waiting period will not just be 38 working days but 2x or 3x that period. 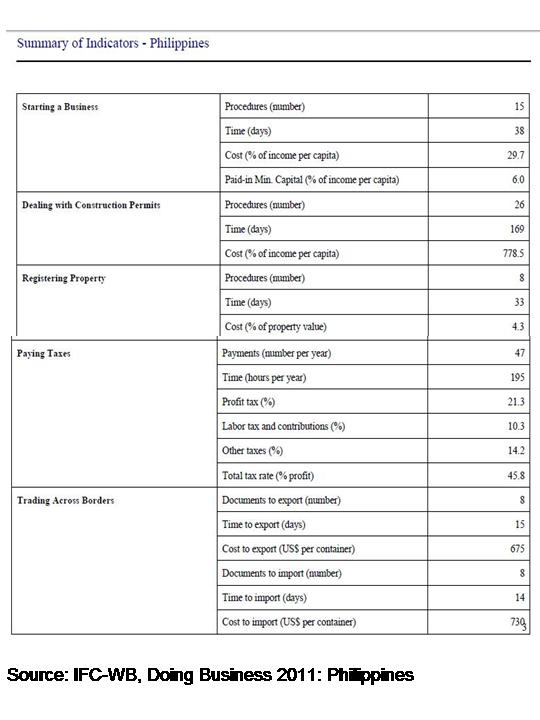 Paying taxes for an average corporation, 47 different taxes and fees per year(!) that will require 196 hours (or 24.5 working days or more than 1 month). Profit tax is 21.3 percent, but when various mandatory or obligatory labor and social security contributions are included, the total tax rate would rise to 45.8 percent of a corporation's profit.

So government creates lots of direct taxation, mandatory contributions (which are indirect taxation) and other forms of regulations and prohibitions (one is prohibited by law to conduct any business unless those regulations are obeyed and followed). When these restrictions and prohibitions are enforced, many people and entrepreneurs will be forced to kneel and bow before certain government officials, pay bribes or what just to hasten a supposedly non-criminal, non-prohibitive action like putting up a small business, or hiring new workers. 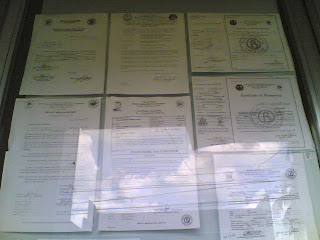 (I took this picture of various government permits in a water purifying/distilling shop near our place in Makati). If the poor and the lower middle class want to stand on their own and not depend on government welfare, they put up a vulcanizing shop or barber shop or carinderia or fishball/barbeque stall, the government officially says NO. Unless the trying-hard entrepreneur will first get barangay permit, sanitation permit, garbage collection permit, fire department permit, mayor's business permit, DTI permit, SSS permit, BIR permit, Pag-IBIG permit, etc. Most of the "underground or informal" economy that we see are tolerated by some national government agencies but not by the local govt and local police. That is why "arkabala" and bribes to certain city hall or police officers are practiced.

After succeeding to create lots of poverty and high unemployment, government and its multilateral patrons (the UN, WB, EC, ADB, etc.) would blame high population growth.