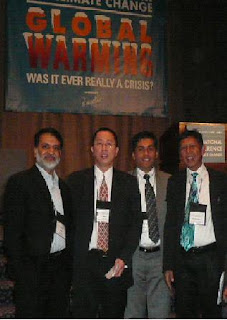 Dr. Willie Soon, a Malaysian-American astrophysicist at the Harvard-Smithsonian Center for Astrophysics in Boston, USA, and Barun Mitra, founder and Director of Liberty Institute in Delhi, India, recently wrote an article questioning this policy of energy rationing, especially for poorer countries like India and China.

In this photo, from left to right: Barun, Willie, Jose Tapia of ILE in Lima, Peru, and me. This was during the 2nd International Conference on Climate Change (2nd ICCC) in early March 2009 in New York City, sponsored by the Heartland Institute.

The joint paper by Barun and Willie, What really threatens our future? was published in The Edge Financial Daily in Kuala Lumpur yesterday. A friend from KL, Wan Saiful Wan Jan, CEO of IDEAS, helped to place the article in the said newspaper. Below are excerpts from Barun-Willie paper. 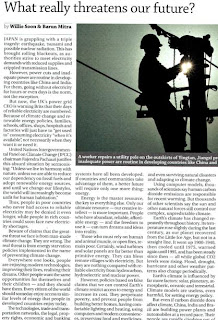 ...power cuts and inadequate power are routine in developing countries like China and India. For them, going without electricity for hours or even days is the norm, not the exception.

But now, the UK’s power grid CEO is warning Brits that their days of reliable electricity are numbered. Because of climate change and renewable energy policies, families, schools, offices, shops, hospitals and factories will just have to “get used to” consuming electricity “when it’s available,” not necessarily when they want it or need it.

UN IPCC chairman Rajendra Pachauri justifies this absurd situation by sermonizing, “Unless we live in harmony with nature, unless we are able to reduce our dependency on fossil fuels and adopt renewable energy sources, and until we change our lifestyles, the world will increasingly become unfit for human habitation.”

Thus, people in poor countries who never had access to reliable electricity may be denied it even longer, while people in rich countries could soon face new electricity shortages.
Citizens of the world’s poor and emerging economies: Beware of claims that the greatest threat we face is from manmade climate change. They are wrong. The real threat is from energy starvation policies implemented in the name of preventing climate change....

People in rich countries will not give up their modern living standards, electricity, automobiles, airplanes, hospitals, factories and food. Mr. Pachauri certainly will not. Why, should people in poor countries give up their dreams?

During the Cancun climate summit, rich nations said they would give poor countries $100-billion annually in “climate change reparation and adaptation” money. But these are empty promises, made by nations that can no longer afford such unsustainable spending.

Poor countries that expect this money will end up fighting over table scraps – and whatever funds do flow will end up in the overseas bank accounts of ruling elites. The poor will see little or none of it.

For awhile longer, rich countries will continue supporting global warming research and conferences. Researchers, bureaucrats and politicians will continue issuing dire warnings of imminent catastrophes, while they enjoy the benefits of modern energy, traveling on airplanes, attending talk fests at fancy hotels in exotic locations – all powered by coal and petroleum.
They may continue telling the world’s poor how important and admirable it is that we keep living traditional, sustainable, environment-friendly lifestyles; getting by on small amounts of intermittent, unreliable, expensive electricity from wind turbines and solar panels; and giving up our dreams of a better, healthier, more prosperous life.

Whether we, the world’s poor, must give up our hopes and dreams. And whether we will determine our own futures – or the decisions will be made for us, by politicians who use climate change to justify restricting our access to reliable, affordable energy.

Which should we fear most? Climate change that some say might happen 50 or 100 years from now? Or an energy-deprived life of continued poverty, misery, disease, and forgotten hopes and dreams?

Our future is in our hands.
Posted by Bienvenido Oplas Jr at 5:14 PM