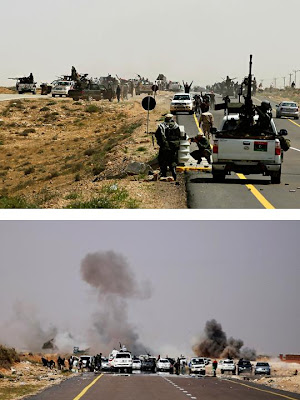 War is ruthless. Whichever way you look at it, war means destruction, shooting and killing. That is why we should aim for a peaceful society, a society based not on coercion but on voluntary exchange among people.

While the bulk of humanity's progress and modernization is on the positive side, meaning the construction of many structures to allow people to live and work in peace, a sizable amount of human invention and modernization is used to develop weapons of destruction and death. All these are currently happening in Libya.

All pictures here are taken from the New York Times photo gallery. And most of the armed men here are rebels. Foreign journalists are not at liberty to take any pictures they wish to take as they are being monitored by the Libyan government in the capital. 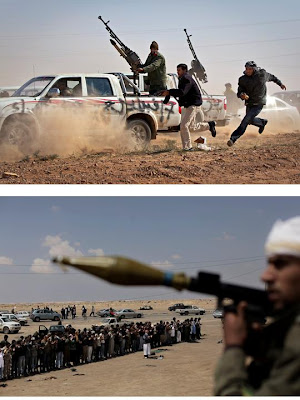 Being in power for 42 years now, Muammar Gadhafi (or Qaddafy or Gaddafi or Khadafy...) has stockpiled enough armaments and bombs to kill potential rebels who will challenge his reign of power. Even if the Allied aerial bombardment has decimated his choppers and fighter jets, lots of weaponry are on the ground -- tanks, missiles, rifles, bombs and ammunitions.

The rebels, mostly civilians who took instant training in actual combat, are generally less skilled in the art of shooting and killing. But they are fighting for a cause, the desire to be free from Gadhafi dictatorship. 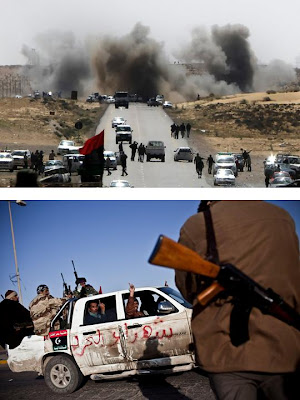 It's eerie to see all those fighting. The greed and hatred that had been planted in the hearts and mind of people under many decades of political dictatorship are now getting actual outlet. People bearing guns and bombs.

The Gadhafi forces are more fierce in their defense of the status quo. They have tasted power and large-scale coercion for many years now. It is something that they do not want to be taken away from them, especially with the prospect of rebel victory. The greed for continued power and coercion over other people is what drives them to become brutal killers of those who challenge them and their leader. 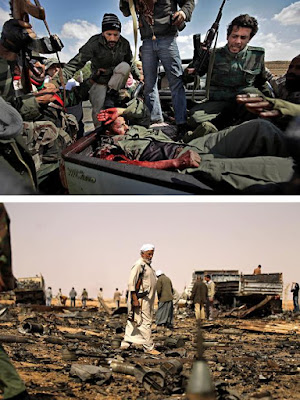 Why would people tolerate a situation where they work hard, only to see that a big portion of their earnings go to the government, a big portion of which will be used to procure armaments and to train tens or hundreds of thousands of able-bodied men on the art of killing and destruction.

Woe unto the people who do not like such kind of arrangement, but nonetheless have to go through the same path of taking up violence in order to control or stop mainstream violence by the state. 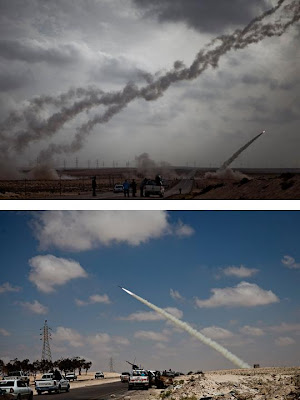 Rockets, like fighter jets, are weapons of long-distance killing and destruction. The pictures of rockets here are again, from the rebel side. The accuracy of those rockets to really hit their targets, usually armored trucks, tanks and bunkers, is not 100 percent, especially if in the hands of new recruits from the civilians who have no formal military training. So those rockets and missiles are capable of hitting civilian structures and houses.

I understand that the UN has certain "rules of conduct" during war. But who pays attention to such UN regulation? The best rules of conduct during war is no war. Dictators, both in government and among ordinary civilians, often hate peaceful debate. They are allergic to debates, they want a short cut to settle debates through the use of arms, violence and coercion. 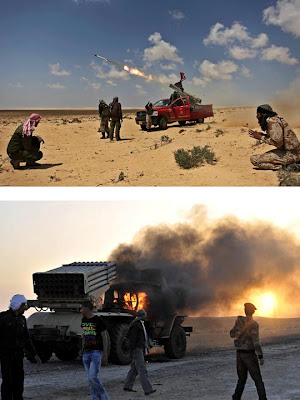 We will have to look at the role of the weapons manufacturing companies, mostly in the US, Russia, Germany, UK, France, China and Israel. But being private enterprises, they generally respond to incentives. When there is big demand for missiles, rockets, bombs, tanks, fighter jets and related products by many governments, they produce more to cash in and earn huge profits. 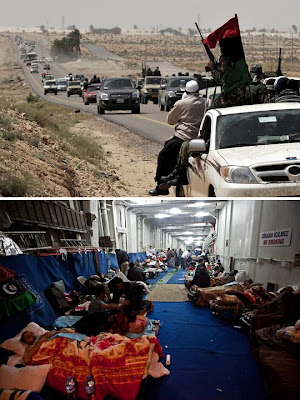 And here are the ordinary Libyan civilians. Torn between armed government troops and armed rebels firing missiles and guns against each other everyday, the civilians, especially the weak, the sick, the old and the young, are the worst affected.

I wish to see the end of violence in Libya and elsewhere. I believe that Gadhafi must go, but the new government, from among the various groups in the rebel forces, must assure the civilians that the old system of political and economic repressions should not be repeated. Otherwise, the current destruction and killing will just be repeated in the future.

Coercion is evil. The use of arms and violence to advance whatever political or philosophical agenda is evil. BIG governments thrive on coercion and the stockpile of weapons of violence and destruction, to harass if not kill, those who will seriously challenge the coercion and deception that the BIG state has inflicted on the citizens.

Let us keep this mind always.
Posted by Bienvenido Oplas Jr at 7:43 PM