(Note: I wrote this in my now inactive travel blog, http:travelpinoy.blogspot.com, last August 8, 2006. The photos I just added today) 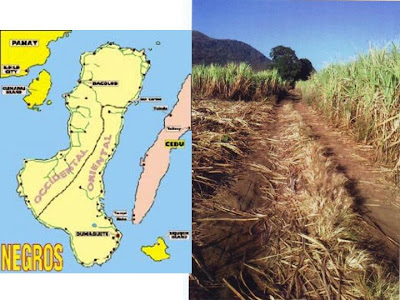 Negros Occidental is the Philippines' 3rd or 4th most populous province outside of Metro Manila. And while many of the 80 provinces in the country do not have a single city yet, Negros Occ. has 13 cities. 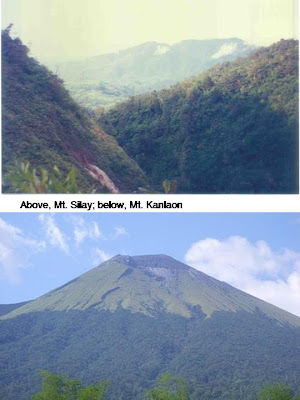 The province is generally flat, but 2 huge mountains can be seen from a distance, especially from a plane preparing to land in Bacolod airport -- Mt. Silay on the left and Mt. Kanlaon on the right. Mt. Silay is an old volcanic formation that has remained inactive. It has a number of summits, which are bounded by many cities in the northern part of the province – the cities of Silay, Victorias, Manapla, Cadiz and Sagay. Mt. Kanlaon on the other hand, is an active volcano and communities and villages on its foot are occasionally threatened with forced evacuations whenever the volcano is rumbling. The mountain’s summit is bounded by a number of cities and municipalities of the 2 neighboring provinces of Negros Occidental and Negros Oriental.

Until about 3 years ago, you will seldom see idle lands. Something like if you travel 70 kms. north of Bacolod, passing by the cities of Talisay, Silay, EB Magallona, Victorias, Manapla, Cadiz, and Sagay, the chances that you will see idle lands of at least half an hectare area for every 5 kms. was about 3%. That is, for every 5,000 meters say on the right side of the road, there are about 150 meters combined length of idle lands. Now, you'll see idle lands of about 5-7% for every 5kms. This might seem a near-doubling of idle lands, but compared to other provinces, in fact to all 79 other provinces, Negros Occidental still has the most optimal land use (or the least hectarage of idle lands).

Idle lands develop through a series of land conversion: originally from forest land to sugarcane land, to vegetable farms and fruit orchard, to temporarily idle lands, later to residential or commercial lands. With the on-going construction of an international airport in Silay City (about 16 kms. north of the current airport in Bacolod), plus the emergence of high-end real estate projects developed by Ayala Land in Talisay and Silay, speculation for more real estate projects in surrounding areas is higher.

Roads from Bacolod northwards are generally in bad shape. The main culprit are the hundreds of heavy trucks that carry sugarcane to various sugar milling companies. Among the biggest are Victorias Milling Co. (VMC) in Victorias City, and Philippine-Hawaiian Sugar Milling Co. in Silay City. A six-wheeler truck could be carrying around 12 metric tons (MT) of sugarcane + truck body weight of at least 2-3 tons. Ten-wheeler trucks could be carrying around 20+ MT sugarcane + their body weight, while haulers, those 18-wheeler long trucks could carry some 30 MT+ of sugarcane + their body weight.
-------

I thought of re-posting this as a follow up to my earlier article, Back to our roots.

In relation to agrarian reform program in this country, or the forced land redistribution with no timetable, the sugar plantations in Negros and a few other provinces are perhaps the clear example that medium- to large-scale farming are often more preferable to micro- or small-scale farming of one hectare or less. Land cultivation and preparation for the next cropping are done by big tractors and machines, not carabaos (water buffalo) or hand tractors, increasing the pace of planting while reducing the cost of production.

I say "land redistribution with no timetable" because while forced land reform in Taiwan, Japan and S. Korea were successfully implemented in just 1 to 3 years many decades ago, agrarian or land reform in the Philippines is now almost 40 years, counting only from former President Marcos' PD 27 or land reform law in 1972, and no definite timetable yet of when it will finally be stopped and closed.
Posted by Bienvenido Oplas Jr at 2:47 PM