Where there is lack of competition, there is generally lousy service and/or expensive prices. A monopoly (single producer) or oligopoly (few producers) have little incentive to really improve their service or bring down prices. Consumers have little or no option anyway but buy from them, so why spend big money to innovate hard?

There's a good article by a friend, Harry Santos, in his blog today, Why is the Internet Slow in the Philippines. I went to his primary data source, netindex.com and here is the ranking of 170 countries covered as of April 11, 2011. Click on the picture to get a large image. 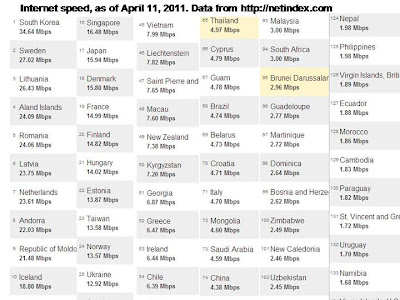 South Korea has the fastest internet connection all over the world with a whooping 36.64 Mbps. It is followed by Sweden, Lithuania, Aland Islands, Romania, Latvia, Netherlands and so on.

Among other Asian countries, here are their ranks and internet speed, in Mbps:

So one will naturally ask, Why are internet speed in S. Korea, Singapore and Japan, much faster than in the Philippines? Aren't we supposed to have fast internet connection because we are gunning to be no. 1 worldwide in business process outsourcing (BPO) business? 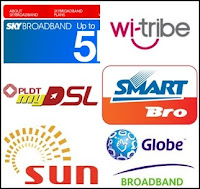 Harry said that S. Korea has 29 competing internet service providers (as of 2002) fiercely competing with each other. The Philippines has only 6 major players, 3 of which are owned by the Manny Pangilinan group -- Smart, PLDT and now SUN. See my related article, Telecom oligopoly 1: Smart takeover of Sun.

I've been suspecting that Pangilinan and his companies are now the new cronies of the past and present administration. Our economy is structurally allergic to fierce competition due to the 1987 Philippine Constitution that disallows the entry of foreign investments and players in many sectors of the economy, and the legislative franchising system for utilities and media. Then add the strong protectionist lobby by various local vested interests, from business groups to NGOs and media, business cronyism is not difficult to happen.

For NGOs, other civil society groups and academic institutions that seek corporate funding for many of their activities, be wary when those corporate interests that thrive on cronyism will be asking for certain "favors" from you later on.

Related article will be UN bureaucracies -- too many, part 2, it's about the plan of some bureaucrats and bureaucracies at the UN to regulate the internet.
Posted by Bienvenido Oplas Jr at 8:03 PM