Migration and Freedom 7: Restrictions to OFWs

A friend based in the Middle East, Cynthia D., commented to my earlier discussions now contained in Nanny state 2: Entrepreneurship vs. bureaucracies. She made the following observations on new regulations by the Philippine government that make it more difficult and more costly for aspiring overseas Filipino workers (OFWs) to be hired abroad. She wrote,

You are unfortunately correct about our country steadily becoming more of a nanny state. So many of the things that are done supposedly for 'the good of our people' end up either reducing our freedoms or are simply ruses to line different official's pockets. One of the things that has really bothered me over the last two years are the continual additional items that our immigration personnel at the airports require for people to travel out of Philippines. About a year ago, for travelers to the Middle East, the airport authorities started wanting an approval certificate from the Phils. Embassy in the country people are traveling to which stated that the people are legally invited and their expenses will be taken care of while there. To obtain this certificate a foreign company or one of us living in that country has to write a letter to the embassy stating they will provide support and of course pay a fee to obtain the stamped and sealed certifcate. Each time I have people travel for interviews or visits since then the immigration people have steadily wanted more and more documents to the point that I can never be sure if the people will be refused from their flights for some new document. Of course they will let people through for a small gift of money but I always insist our visitors don't play these games.

The problem is that the people enforcing such requirements claim they are protecting our poor and 'ignorant' population from human trafficking or from being taken advantage of... If a person has a ticket and a visa to visit a country that is not on the banned list they should be allowed to travel, but according to our nannies, that is not necessarily the case...

It is especially frustrating when I come across a really good job that I would love to see filled by a kababayan but am constantly frustrated by the endless obstacles placed in our path by our own government. When I question our officials all I get told is "we are protecting our citizens from human trafficking..." Unfortunately they are often preventing our citizens from getting good paying jobs since others can deploy an Indian IT tech or an aircraft mechanic much faster than I can bring a Filipino.

Sometimes I can bypass the system by bringing the person on a visit visa instead and then starting the paperwork processing after he or she arrives, but with these rules limiting travel that becomes more difficult. What is a shame is that I find these rules can all be 'bent' if I go through an 'agent' who has a friend in the management of the POEA but who wants to charge 2 months salary to make that happen. That's not small when some of these salaries are $5000 or $6000 a month.

If those observations are not nightmarish yet, here's another government regulation -- requiring OFWs to have mandatory insurance -- that was implemented last year. 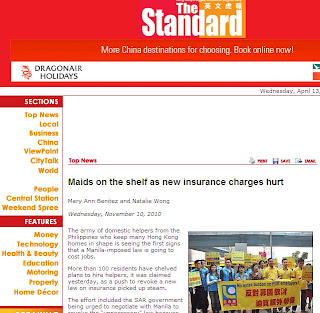 A report from The Standard in HK last November 10, 2010, Maids on the shelf as new insurance charges hurt said,

..More than 100 residents have shelved plans to hire helpers, it was claimed yesterday, as a push to revoke a new law on insurance picked up steam... The law, revealed by Manila last week, makes workers carry policies costing US$144 (HK$1,123) to cover a two- year contract, with premiums paid by employers or recruitment agencies.

Coverage includes US$15,000 for death in an accident, US$10,000 for natural death, and US$7,500 in case of permanent disablement. There are about 130,000 Filipino domestic helpers in Hong Kong affected by the law.

"The new measure was hastily adopted by the Philippine government with no transparency," Lau said. "The Philippine officials involved have not considered the responses and feelings of overseas employers."

Under SAR law, about 280,000 employers take out insurance costing about HK$900 every two years. But many employers have voluntarily purchased comprehensive insurance of about HK$800 to HK$1,000 a year to cover medical expenses on top of compulsory labor insurance, Law said....

The same issue was carried in the local media BusinessMirror that same day, HK employers hit law on insurance. It reported, 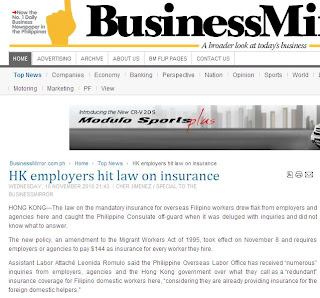 ... The new policy, an amendment to the Migrant Workers Act of 1995, took effect on November 8 and requires employers or agencies to pay $144 as insurance for every worker they hire.

...Deputy Consul General Kira Christianne Dañganan-Azucena said, “The reaction was significant, so we’re responding by making sure that their sentiments reach the proper authorities in Manila. There are still some things not clear. Their questions is if this mandatory insurance apply to Hong Kong-bound domestic workers, considering the employers have to pay already some kind of insurance for every worker they employ under Hong Kong law. What happens to the worker if terminated? Is the insurance transferable? Can the person who paid the premium get back the money? Details like that.”

She said while the law explicitly says that workers will not be made to bear the cost of cover, it is not clear if the employer or the recruitment agency should carry the burden of paying premiums.

Azucena said the consulate was not consulted before both houses of Congress passed the law. According to her, what was asked of the post was a certificate noting that Hong Kong has existing labor laws that protect migrant workers.

These new laws and restrictions that were passed with little or no transparency, were likely trigged by cronyism by certain Philippine legislators and POEA officials in the local insurance industry.

Employment, whether local or foreign, is strictly a private contract between an employer and an employee. Government is outside of the picture. Only when one of the parties, employer or employee, breach the contract, then government can come in to enforce the rule of law. Like when the employer does not give the stipulated salary and other benefits, or when an employee has caused physical harm to the employer and his/her family. Government comes in after the breach or non-obedience of contract, not before. Because if government will intervene in each and every employment contract with ever-rising regulations and restrictions, then a hell of bureaucracy is slapped on everyone, including the law-abiding employers and employees.

The usual reason of "protecting our OFWs from human trafficking and abused by foreign employers" is a catch-all alibi to create new restrictions and rackets that are in fact indirect robbery. To require for instance that the employment agency will get one or two months of an OFW's salary on top of other fees for facilitating a private contract between a foreign employer and an OFW is tantamount to robbery sanctioned by the government. And to require another round of work insurance when foreign employers are already required by their own governments to provide insurance for the OFWs that they hire, is simply raising the cost of employment, and reducing the chance of employment by Filipinos who want to try their luck abroad.

Email ThisBlogThis!Share to TwitterShare to FacebookShare to Pinterest
Labels: migration and freedom, OFWs