(Note: this is my article for thelobyist.biz today)

Taxes are indirect way of government saying to the people, “Give me your money, I can spend it better for you than you yourself.” So the higher the tax rates and the plentier the number of taxes, the higher is the level of distrust of government to the personal discretion of the people to do what they think is good for themselves.

All sorts of justifications and alibi are flying left and right with one central message: the government wants more money to be confiscated from the citizens, so that the government can spend more for the citizens. Say that again?

Sometime last February this year, former NEDA Director General and former UPSE Dean Philip Medalla, presented a paper at the Bangko Sentral ng Pilipinas (BSP) on fiscal policy and mentioned that we may have to accept the reality of more taxes in the near future. I questioned him on that during the open forum, see Cut income tax movement, part 1.

And sometime in January or February this year, the government economic think tank, Philippine Institute for Development Studies (PIDS) also produced a paper that in order to attain the MDGs, there is a need to hike taxes. I criticized that PIDS paper in MDGs, taxes and PIDS. 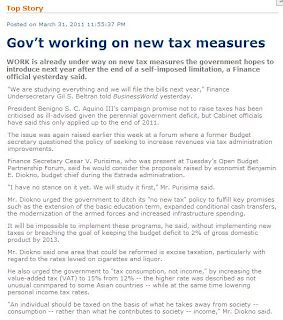 Today, there is a news in BWorld, Government working on new tax measures. The report was referring to the DOF plan to work on the proposal by former DBM Secretary and UPSE faculty member, Benjamin Diokno, to raise taxes on 3 areas: (a) raise the excise tax on cigarettes and liquor; (b) raise VAT from 12% to 15% in exchange for a cut in income tax; and (c) raise the real property tax (RPT).

Personally, I favor the first two proposals of Dr. Diokno who was my former professor two times (undergrad and graduate) at the UPSE. Raising taxes on tobacco and alcohol products I think, is long overdue. Since the government thinks – which I disagree – that healthcare is not much personal responsibility but government responsibility, then people can over-drink, over-smoke, over-eat, over-fight, etc. and when their lungs, liver, heart and other internal organs are dilapidated, they can run to the government to demand that “health is a right.” So government should raise lots of money from tobacco and alcohol products to finance its massive healthcare spending.

On raising VAT and cutting income tax, my favorite formula is a rise in VAT from 12 to 15 percent, in exchange for an income tax rate, both corporate and personal, between zero to 10 percent flat. This need not be attained within the next five years or so. A transition period of declining income tax rate from an initial flat 18 percent (again, both corporate and personal income tax) down to flat 15 percent after say five years, down to flat 10 percent after another five to ten years, ultimately to zero, or the abolition of income tax.

I have discussed the merits and advantages of raising consumption-based taxes like VAT, excise tax and entertainment tax, in exchange for drastic cut and ultimate abolition of income tax, in the above article on Cut income tax movement, part 1.

The increase in RPT is something that I think is not wise. Government should not tax, or slap only low tax, on productive land and areas. It should instead tax idle and unproductive land. An area that is full of buildings, malls, offices and houses means thousands of jobs are created there. When people have jobs, they are not likely to run to government to ask for welfare and subsidy. Developed areas also tend to be self-reliant. Malls, commercial business districts (CBDs) and residential villages usually have their own street lighting, garbage collection, road construction and maintenance, private security, so that their demand from local government for those services is minimal if not zero.

Taxing idle lands and areas is a clear message to the owners of those lands that “Your area is not creating jobs, better pay up taxes or sell your land to other people who can make it productive and create more jobs.”

Government is coercion and is financed only by coercion, taxes and other mandatory fees and contributions. Let the coercion be kept to the minimum.
Posted by Bienvenido Oplas Jr at 2:29 PM