The Asia-Pacific Taxpayers Union (APTU) will hold its annual meeting in Bangkok, Thailand, late this week, April 29-30. Venue will be the Rembrandt Hotel. I am supposed to be a part of this meeting, but I could not find a local sponsor to finance my trip.

APTU is the regional "branch" of the World Taxpayers Association (WTA). Members of APTU and WTA are taxpayers' associations or organizations or unions in various countries that fight for low and simple taxes, accountable government and taxpayers' rights. Minimal Government Thinkers, Inc. which I represent, is not exactly a member of APTU because MG is a think tank, not a taxpayers' movement. But we got into the APTU network because "small government, small taxes,..." are among our major advocacies. 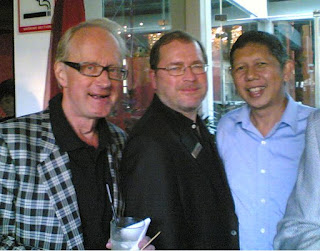 This is my favorite picture in the WTA network. Bjorn, the Secretary General of WTA and Chairman of APTU (left), Grover Norquist, President of Americans for Tax Reforms (ATR), and me. This was during the 3rd Pacific Rim Policy Exchange held in Singapore in late September 2009. WTA and ATR are among the major sponsors of that big conference. ATR is also a member of WTA. 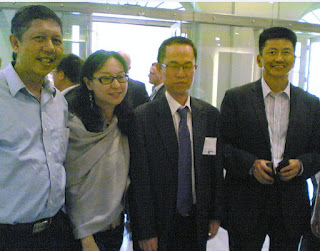 Among the members of APTU are the Korea Taxpayers Association (KTA), represented by its President, Mr. Kim Suntaek, 2nd from right, and the Mongolians for Fair Taxes and Wise Spending, headed by Jargal Dambadarjaa, right. KTA is perhaps the biggest taxpayers movement in the whole of Asia as they have several hundred thousands of dues-paying members. This picture was also taken during the Singapore conference in 2009. 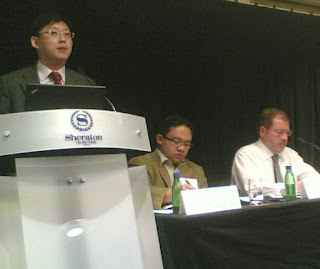 Another affiliate of APTU is the Lion Rock Institute (LRI) in Hong Kong, headed by Peter Wong, here speaking. Some LRI fellows and members were the founders of Momentum 107, a taxpayers' movement in HK.

Some may wonder why HK, having among the lowest tax rates around the world, would need a taxpayers movement, or a free market think tank. Precisely the point, as there are moves by some HK politicians, to raise certain taxes, to expand government, to provide more welfarist programs, to enact interventionist policies like having a minimum wage law and creating a new bureaucracy, an Anti-Trust Commission. LRI and Momentum 107 are among the vocal groups that oppose such moves, to remind the HK government that HK progressed because of free market, not because of government interventionist policies. 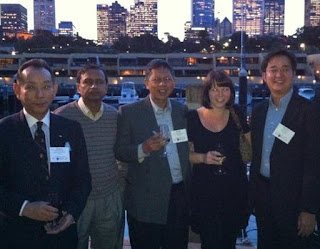 Another important member of APTU is the Japanese for Tax Reforms (JTR) headed by Masaru Uchiyama or simply "Mr. You", leftmost. Mr. Raymond Ho, rightmost, is the the head of Momentum 107-HK, rightmost. Picture taken during the 4th Pacific Rim Policy Exchange in Sydney in late September 2010. Beside Mr. You is Khalil Ahmad, the head of Alternate Solutions Institute, Pakistan's real free market think tank, based in Lahore. AS Institute is not a member or affiliate of APTU yet.

I wish Bjorn and the participants from various Asia-Pacific countries, success in holding the annual meeting and conference.
Posted by Bienvenido Oplas Jr at 12:17 AM

Grover Norquist is a lobbyist for Big Tobacco. Transnational companies such as Philip Morris will do anything for profit, even at the expense of public good.

Thanks Dr. Yul. Assuming that the allegations are true, do you imply now that ATR's campaign for low, flat tax is wrong? That the campaign for smaller government, expenditures cut to control huge budget deficit and endless govt borrowings, are wrong, because ATR head is a "lobbyist for Big Tobacco"?