Lent and the crucifixion of climate science

(This is my article yesterday in thelobbyist.biz)

Today is Good Friday, the day that Jesus was crucified and nailed on the cross, based on Catholic teaching. And today is also the “Earth Day”, the day that people should remember to “save the planet”, that our planet is in a crisis, is in danger. From whom?

Below are the graphs of sea ice extent and satellite pictures, of the Arctic on the left and Antarctica on the right, as of April 21, 2011. 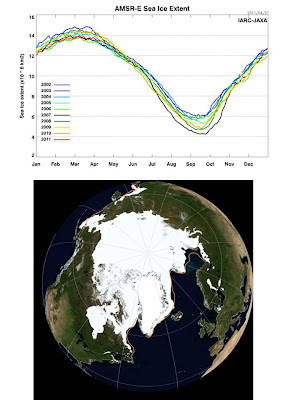 Years covered in the graphs are from 2002-2011 in the Arctic, and 2003-2011 in Antarctica. All data are from WUWT’s sea ice reference page, http://wattsupwiththat.com/reference-pages/sea-ice-page/

The above graphs are simply saying that the polar ice in both the Arctic in the north and Antarctica in the south, are simply on a regular cycle of melting-growing each year. There is no such thing as “ever-melting” or “melting faster than usual” ice in both ends of planet Earth. 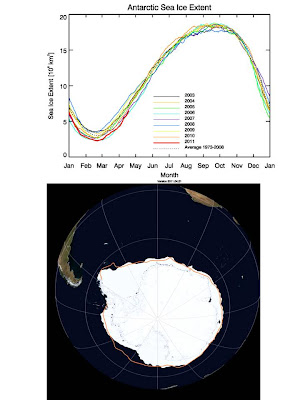 The two satellite pictures simply show the actual size of the ice in both ends of the planet as of this week.

The “ever-melting” polar ice is among the central fear-mongering campaign of the man-made warming cult, because that would mean rising ocean level, the flooding and inundation of so many cities and several small, low-lying countries. Which in turn will create hundreds of millions of “climate refugees” in so many countries around the world.

I am here in Iloilo City as I write this. I came from Cadiz-Bacolod cities yesterday. Two days I was there, it also rained on those two days. It is refreshing to have regular rains, or at least cloudy sky like here in Iloilo, even in late April.

And that possibly represents the height of idiocy, and continued crucifixion, of climate science until now. Courtesy of the United Nations, many governments and the rent-seeking environmental NGOs.
Posted by Bienvenido Oplas Jr at 10:33 PM