The UN Millennium Development Goals (MDGs), along with "save the planet" drama through the UN Framework Convention on Climate Change (UN FCCC), are two of the biggest and high profile projects by the UN bureaucracy and many national governments, to institute global forced collectivism.

Recently, news reports of "new taxes", "more taxes" to attain the MDGs are becoming more frequent. A number of academic economists have been parroting the mantra too. Like today's story, Palace to consider tax measures. It says,

MALACAÑANG said on Sunday it will consider the advice of a government think tank to legislate tax measures by 2012 to meet the country’s Millennium Development Goals (MDGs) by 2015, but insisted that there is no need for it at this point.

Secretary Ramon Carandang of the Presidential Communications Development and Strategic Planning Office (PCDSPO) said in an interview with state-run Radyo ng Bayan that while Malacañang believes the country can get by without raising or imposing new taxes anytime soon, it will consider such next year if the need arises.... 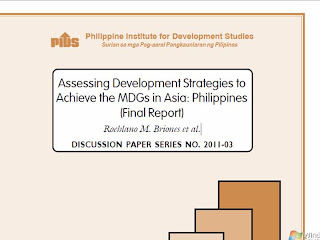 I checked the web and I found this study by the Philippine Institute for Development Studies (PIDS) entitled Assessing Development Strategies to Achieve the MDGs in Asia: Philippines (Final Report) by Roehlano M. Briones et al. This seems to be a country by country study and the PIDS paper is for the Philippines.

According to that report, there is a big gap between the present situation and the MDG by 2015 for some sectors. 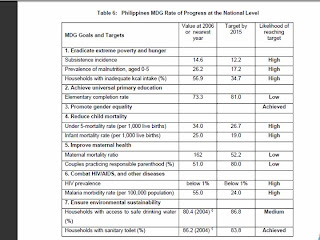 The gap is widest in MDG 2, Achieving universal primary education. Also at a wide gap are the goals on Maternal mortality ratio, and Couples practicing responsible parenthood. On another note, the Philippines has already achieved the goals on Gender equality and Households with toilets.

But perhaps the most significant part of the 45-pages report is its recommendations on funding the MDGs. Here is their summary table on page 30. The PIDS guys are proposing that we pay more taxes. Something like P490 billion per year from 2010 to 2015 if the Philippines is to attain just MDG 2, up to P545 billion per year to attain all the remaining MDG goals.

The texts beside this table are the concluding paragraphs. Very revealing at how those guys at the taxpayers-funded think tank would think. 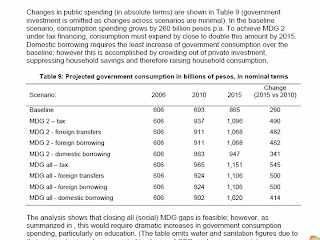 Our MDG scenarios suggest that closing the MDG gaps for social indicators would require dramatic increases in government spending, particularly for education services. Among the financing options, Debt financing either by domestic or foreign borrowing would likely lead to unsustainable levels of public debt. foreign transfer financing is more consistent with sustainability, but appears infeasible given trends in ODA. This leads to tax financing of MDG achievement, which is also consistent with sustainable debt trends. However it entails an increase in direct tax effort by about 3-4% of GDP – well within the range of past levels of tax effort, but a considerable challenge given tax collection patterns over the past decade. The current administration’s emphasis on tax collection effort is a laudable step in this direction, though it should remain open to a selected set of new tax measures....

The study recommends attempting to close the MDG gaps using tax financing. This financing option is feasible in the sense that the required revenue effort has been achieved before. Admittedly, it entails a dramatic improvement in revenue effort, compared to most recent trends over the past decade. This underscores the urgent, developmental rationale for raising collection efficiency, introducing new tax policies, in combination with public sector reforms for cost-effective service delivery.

I remember that in the 2004 value added tax (VAT) hike debate (from 10 to 12 percent), probably the same group of economists from the academe, PIDS and other groups were saying something like "We should raise VAT, along with improved collection efficiency, otherwise we shall suffer a terrible fiscal crisis."

These days, they are saying, "We should raise new taxes, along with improved collection efficiency, otherwise the MDGs will not be attained, poverty will worsen and we shall suffer a terrible social crisis."

What is the difference between the two "social catastrophe if no new taxes" warnings?

Not much. They have more similarities -- that we ordinary taxpayers should surrender more of our income, more of our savings, to the government -- than differences.

The VAT expansion and hike law of 2005 was supposed to reduce the annual budget deficit and the pile up of public debt as the government will not borrow much since there are tens of billions of additional revenues from that measure. But this did not happen. Why?

Seeing that new money is coming, politicians from all shades, from the administration to the opposition, lined up the budget with all sorts of bleeding heart programs to "fight poverty" or "fight unemployment" or "fight climate change" and so on. For every P1 of additional revenue from the VAT hike, there was probably P1.50 or more of additional spending.

If attaining universal primary education is such a very important goal, then the government can realign the budget by reducing the budget for tertiary education, or privatizing (fully or partially) a number of government corporations and financial institutions.

I would argue that we should cut certain taxes instead, like income tax. Look at those MDG fighters, receiving five to six digit, even seven digit, monthly salaries from their huge research grants from the UN, WB, ADB, USAID and other foreign aid bodies. Their income is tax free. They are not covered by the mandatory withholding tax. Their imported cars and other perks are also tax free. And these are the same people who recommend that governments should tax and tax the public.

A tax cut, like a cut in personal and corporate income tax, means the public can keep more of their income. A middle class household who experiences income tax cut would feel an equivalent of "pay hike". They can use the extra earnings to hire a nanny for the kids, or a family driver to bring the kids to school while the couple are also working. This new job creation gives money to the poor, which allows them to have higher income, send their kids or younger siblings or relatives to complete their primary schooling.

There are a number of other measures to attain the universal primary education goal (MDG 2). But new taxes, new borrowings -- from private investors or the foreign aid establishments -- are not exactly the right way to do it. Only statists who so love the "spend and spend, tax and tax, borrow and borrow" philosophy would be enamored at such highly interventionist and highly coercive measures.

(See related articles here, VAT and tax extortion, On taxes and Congress, and Endless program for the poor)
Posted by Bienvenido Oplas Jr at 5:38 PM

Yes, I agree wholeheartedly. I am about to write a blog on this topic also. I will emphasize the fact that raising tax rates does not necessarily mean raising the revenues. This is specially true in the Philippines because raising the EVAT rates simply increases the power of the tax collector over businessmen. Raising tax rates simply means that more businessmen would rather bribe the tax collector than pay the government, thereby reducing revenue instead of increasing it.