The Middle East and North Africa (MENA) is generally characterized by long-term monarchies and dictatorships, where a clan of kings or monarchs and Presidents, would rule not just for a decade but multiple decades, and even for centuries. See Part 7: Cry for freedom. 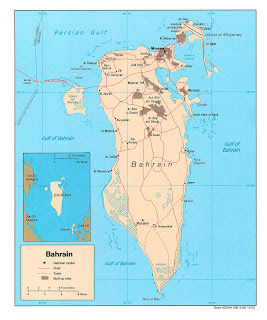 Bahrain is a tiny archipelagic country composed of 33 islands in the Persian Gulf. It lies between Saudi Arabia and Qatar.

Its population is only 1.23 million as of 2010, more than half of which are immigrants and visitors from India and other Asian countries like the Philippines. But it has a dynamic tourism sector, attracting about 8 million tourists a year on average. It seems to be the only Mid-East country which ever hosted the F1 race. 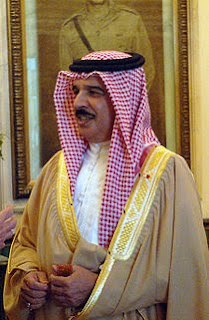 So why do many Bahrainis become politically restive recently? The country is a monarchy ruled by the Al Khalifa clan for two centuries now.

King Hamad bin Isa Al Khalifa reigned since 1999 (12 years), succeeding Monarch or Emir Isa bin Salman Al Khalifa, which ruled from 1961 until his death in 1999 (38 years). While most demonstrators are only calling for major political reforms like the right of suffrage and the control of corruption, some protesters are calling for the removal of the royal family who has been in power since the 18th century. 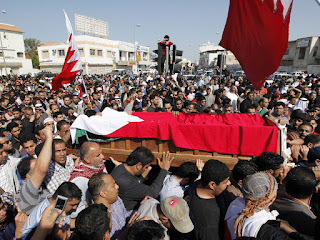 The Shiite majority protest against corruption, discrimination, high unemployment, among others. The absence of direct elections for centuries should be enough ground for the public to clamor for political reforms. A country rich with oil and tourism but the people have no voice against excesses by the royal family and their fellow minority rulers.

Last month, a big demonstration by the opposition resulted in the death of seven rallyists. The monarchy is too scared to be dethroned from power. For them perhaps, government simply means to govern. 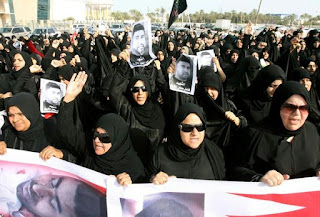 Another violent demonstrations last Sunday in the capital, Manama. But at least there were no deaths, only many people injured.

The next day, hundreds of Saudi Arabia's and neighboring countries' soldiers entered Bahrain to help protect the monarchy under the Gulf Cooperation Council (GCC). Bahrain's King also declared a 3-month state of emergency. 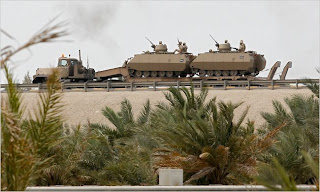 The entry of foreign troops on Bahrain's soil has produced another political and diplomatic issue in the region. More Bahrainis are angered by such act and produced another round of demonstrations in more places. Two protesters were killed in the rallies yesterday.

Iran, possibly the only country in the region where the Shiites are in power, protested the presence of Saudi troops in Bahrain. The US government naturally is worried that it will further embolden Iran to larger military ambitions. (This picture and the next, below, from NYT) 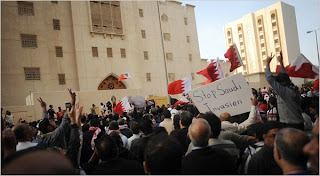 Will these angry Bahrainis -- angry at their monarchy, angry at Saudi troops in their country -- soon become angry at America too? The US government has a military base in Bahrain; they operate some of their military activities in Afghanistan from there. In return, the US government is chummy-chummy to the Bahrain monarchy and dictatorship. Which speaks of the double-talk of the US government with regards to protecting human rights and advancing democracy around the world.

For us observers outside of the Middle East and have never experienced living under a monarchy and absolute political dictatorships, the situation looks rather weird. It cannot be a case of Islamic dictatorship because there are many Islamic countries that allow and respect direct elections by the people, like Indonesia and Malaysia.

While the seeds of unrest have been planted in many countries in MENA, it seems that the status quo will prevail even if they have been rocked hard. Libyan dictator Gadhafi's forces for instance, seem to be reversing the rebel momentum by gaining back some of the cities that were previously in the hands of the opposition.

Freedom and liberty. You're still too far away and still an abstraction for tens of millions of people in MENA and other countries around the world.
Posted by Bienvenido Oplas Jr at 8:42 AM