(Note: this is my article for thelobbyist.biz yesterday)

Global cooling persists and global warming is muted and absent this year.

The most recent satellite temperature data for the lower troposphere of planet Earth has been released and the temperature anomaly (or “deviation from average temperature”) for February 2011 was -0.02 C. See graph and table below. NH and SH means Northern Hemisphere and Southern Hemisphere, respectively.

Global average temperature is pulled down by the continuing La Nina in the tropics, particularly in the equatorial Pacific Ocean. 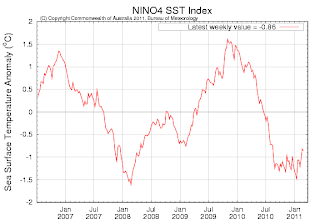 Here is the most recent sea surface temperature (SST) anomaly for equatorial Pacific’s Nino region 4, the region closest to East Asia and the Philippines. It remains at around 1 C colder than the past average temperatures in the region. And unlike global cooling and La Nina of 2007-08, the current La Nina is more prolonged, extending for 9 months straight now.

Are we seeing the end to La Nina and global cooling yet ?

Bad news for the campaigners of catastrophic anthropogenic global warming (CAGW): Not a bit.

The usual issue: planet Earth’s climate runs on cycles of warming-cooling-warming-cooling. There is no such thing as “unprecedented warming” and “unequivocal warming” or “man-made climate change.”

Sadly, when politics comes in, it has no reverse gear. It only moves forward, regardless of what actual climate data show and what independent scientists say.

Politics is everywhere, even if warming is absent.
Posted by Bienvenido Oplas Jr at 12:14 PM