So far I have written only the debts of rich countries in this "Fiscal irresponsibility" series. I am lucky to see the IMF-WB data today on public sector debt statistics. Data there refer only to several poor or emerging economies. Thirty two (32) countries were covered in that list, I took only the top 20 big debtor poorer countries.

The numbers below refer only to external debt by the central or national governments of these countries. Excluded here are debts by the monetary authorities, banks, and so on. 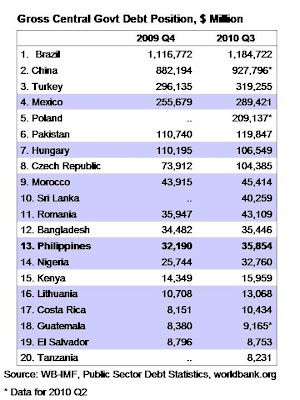 Brazil and China are notoriously indebted, both have combined public debts of around $2 trillion as of 3rd quarter of 2010. Eight countries have debts of more than $100 billion as of last year. The Philippines is at par with Bangladesh in size of debt.

The purpose of governments' external borrowing is to augment local resources (taxes and fees collected, local borrowings) for whatever development programs they have. If those programs were productive and not just wasted or stolen, their economies' productivity should have increased, they can pay the past debts and they need not borrow more and more.

Fiscal irresponsibility, of living beyond their means year in and year out, is one hallmark of most governments, the BIG ones especially.
Posted by Bienvenido Oplas Jr at 4:15 PM