After posting yesterday Part 6, Poor countries' debts, it attracted several comments from some friends, especially in related to the Philippine government's public debt. Hence, this follow up data and article.

I got this from the DOF's Bureau of Treasury website. This table just shows how irresponsible ALL Philippine governments have been -- by living beyond their means, by not controlling their spending even if revenues are not sufficient, so they went on endless borrowings, and the debt keep rising and rising. 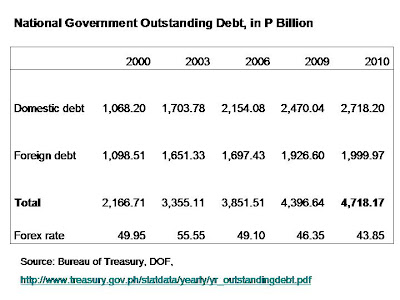 Wrong. An ordinary household would normally live within their means. If the income is small, then they don't buy a car or live in an expensive house. When the income expands, then they also expand their spending, and society develops as people work more, save more, and invest more. Governments are doing the opposite. They promise a lot, spend a lot (it's not the politicians' own money anyway) then borrow a lot. And the debt becomes bigger and bigger, and the proportion of taxes and fees collected that go to debt payment, interest + principal, gets bigger.

"Drop the debt" campaign by rock star Bono and other activist groups like the Freedom from Debt Coalition (FDC) is wrong. Drop the borrowings first, then drop debt payment later. Before we can have freedom from debt, we should have freedom from endless-borrowings mentality.
Posted by Bienvenido Oplas Jr at 12:37 PM