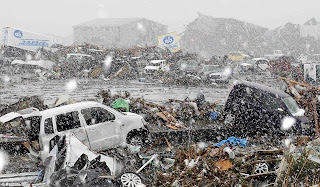 A very bad combination of people having no house and car and then heavy snow starts falling. That's what thousands of survivors in the Northern Japan earthquake + tsunami last week endured early this week. 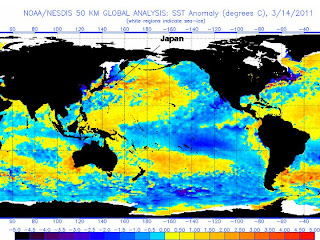 Here's the global sea surface temperature (SST) anomaly as of 14 March 2011. Note the sea ice (white) and colder than normal (blue) sea water to the north-east of Japan. It is indeed a bad period, last week and this week weatherwise, in that part of Japan.

Click on the picture to see a larger image. Data source http://www.osdpd.noaa.gov/data/sst/anomaly/anomnight.current.gif

Below are two among many news reports on snow + post-earthquake Japan. All pictures here except weather images, are from Mail Online. 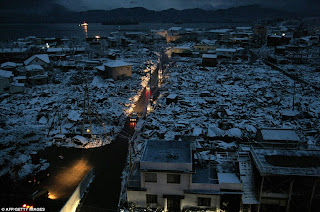 "Snow has just come down in a blanket. Visibility is just 40 meters," said Patrick Fuller of the International Red Cross Federation from what remained of Otsuchi, a fishing hamlet... 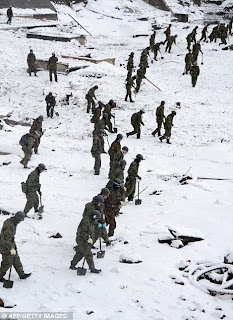 Freezing winds, hail storms and thick snow are the latest threats to 430,000 beleaguered survivors of northern Japan's week-long cascade of disasters. After a massive earthquake, devastating tsunami and nuclear crisis, many people made homeless are now facing icy weather, with temperatures forecast to plunge to –5C (23F).

The soldiers here are stepping on snow-mud-debris surface. A bad combination to look for survivors, if any. 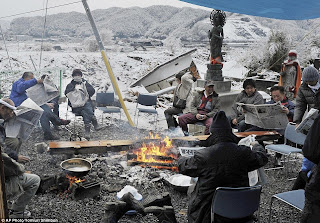 And how's the projected weather in the next few days, will the people there expect some warm and sunny days?

Unfortunately, the answer is NO. Japan and the rest of NE Asia will be in deep freeze. Projections of temperature anomaly (deviation from average) from 16 to 24 March 2011.

I hope that morons will stay out and refrain from saying that "global warming caused the earthquake and snow in Japan."
Posted by Bienvenido Oplas Jr at 6:50 PM