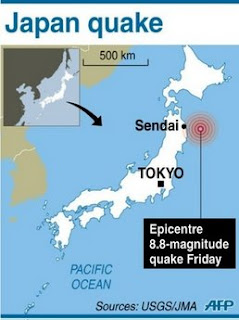 8pm, 11 March 2011. It's now more than 7 hours since the 8.9 magnitude earthquake occurred north-east of Japan today. The epicenter is less than a hundred kms. from Sendai and around 400 kms. NE of Tokyo, in the Miyagi and Fukushima prefectures.

Strong earthquakes that occur in the ocean do not cause immediate damage to houses, buildings and other human structures. Rather, they cause high and strong waves or "tsunami" that sweep nearby coastal areas, and all the human civilization erected there. Depending on the magnitude of the earthquake, but really strong ones can cause tsunami that can travel several hundred, up to 800, kms per hour. 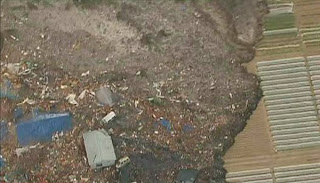 The views on tv were scary. Thousands of houses, boats, cars, buses, small buildings and structures were swept away mercilessly by the strong waves. One wonders that if there was no quick warning to evacuate the coastal areas, several thousand people must have drowned, injured and died 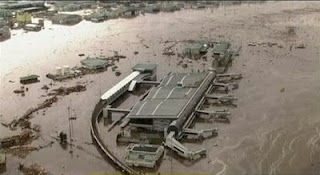 Airports and their runways are usually elevated at least 2 or 3 meters above sea level. But the tsunami this afternoon was estimated to reach up to 33 feet or 10 meters high at the epicenter. By the time the waves reached the shoreline, perhaps they were still at 6 meters high. Thus, even the Sendai Airport was swamped with seawater. 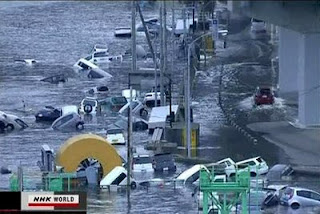 Another chilling view of swept and drowned cars.

One wonders also, what if the tsunami occurred in the evening, how could people quickly pack up and evacuate when they were already in bed. Or what if it was raining so that the rainwater and flash flood would mix up with the seawater. 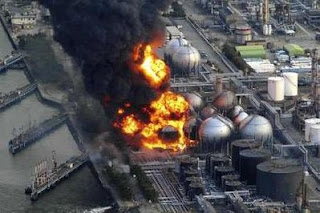 Some 400 kms. south of the epicenter, Tokyo area, the tremors have caused some oil refineries to burn, affecting their storage tanks. Here are some natural gas tanks that got burned.

All nuclear power plants near the affected areas were also shut down. The quick and efficient mitigation measures done by the people, corporations and government definitely reduced the casualties and other potential damages. 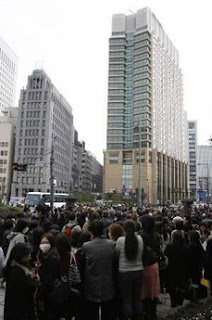 People were told to leave their buildings in Tokyo, in case there are strong after shocks. All trains were suspended in Tokyo too.

A friend of mine who lives there said that the telecom lines were overloaded. Some mobile phones could not be reached. The landlines and internet were ok though. 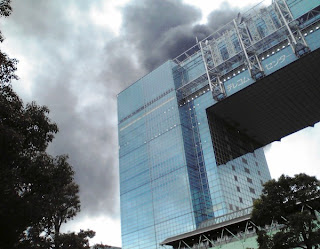 One of the few buildings that got partially burned during the tremors in Tokyo. Could be caused by damaged electrical wires or other factors.

Other pictures showed collapse parking lots, collapsed ceilings of still standing buildings, and so on. 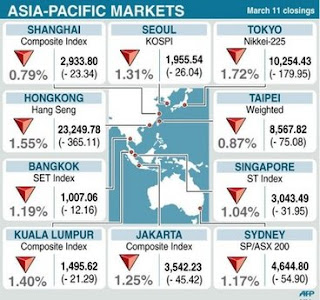 A few hours after the tsunami, all Asian stockmarkets were down. The uncertainty was on the extent of damage to the economy of Japan, especially for listed companies with manufacturing plants in and around Sendai area, the work stoppages as a result of the shutdown of the trains, Tokyo-Narita airport, nuclear power plants and other structures.

Also the adverse effects on insurance companies and banks in Japan to deal with the huge damage to properties and people. But such downfall in Asian stockmarkets should be short-lived and temporary. It was not a structural economic-political problem. It was a natural calamity problem. 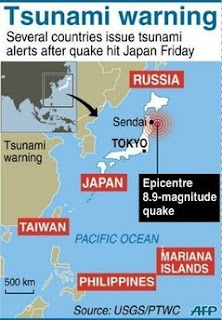 Within an hour of tsunami hitting Sendai, tsunami warnings have been raised in a number of countries near Japan including the Philippines. As I write this, I read that the warning has been raised to 50 countries and territories already, all the way up to North and South America, which are several thousands of kilometers away.

Tsunami warning was raised also in the western coasts of the Philippines, the waves were expected about 3 to 5 hours after the earthquake happened. Luckily, there were no reports of disastrous effects in the north-western provinces of the country.

Today's 8.9-magnitude quake in Japan was comparable to the 9.0-magnitude earthquake that struck the Banda Aceh area of Indonesia last December 2004. The tsunami that happened after it has killed about 250,000 people in 14 countries, mostly in Indonesia, and washed away entire coastal communities. But casualty in Japan was estimated at only around 15 people. Ok, I will revise this later when more updated figures of casualties will be reported. 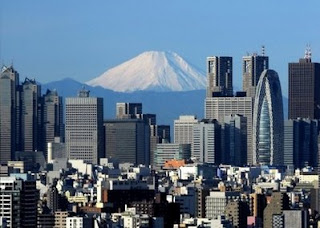 What explains for the huge discrepancy in human casualty for similar earthquake magnitude in Japan and Indonesia?

Others will point to disaster preparedness by their respective governments and communities as the main explanation. Could be. But the more apparent reason is economic preparedness. Developed Japan has more sturdy houses and structures than less developed Indonesia, India and others affected by the 2004 tsunami. Developed capitalist Japan has more advanced telecommunications facilities to inform people -- among family members, friends, relatives, company employees, etc. -- to evacuate quick.

Earthquakes, tsunami, volcanic eruption, will be with us forever. They happened in the past, they happen today, and they will happen tomorrow and the next millions of years hence.

We can only hope that the Earth sciences of geology, seismology and related fields will keep improving in order to allow us to better understand and better prepare for the impending natural geological movements.

And more importantly, let us hope that the geological sciences will not be corrupted by politics, governments and the UN as what happened to the climate sciences. Even if tectonic movements, volcanic eruptions and other geological degassing also emit CO2 into the atmosphere.
------- 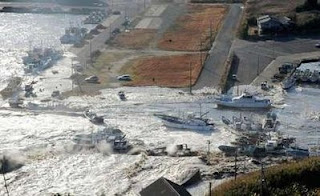 One story, Tsunami hits Japan after massive quake just now reported "A passenger train with an unknown number of people aboard was missing in one coastal area, police told Kyodo. And a ship carrying 100 people was swept away, Japanese media reported, quoting police in Miyagi. It is not clear what happened to the vessel." 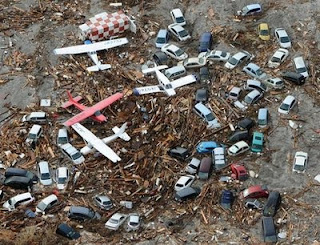 Here in the Philippines, the waves reached the NW parts of the country at 6pm. First wave reported at 60 cms (2 feet). The 2nd, 3rd and 4th waves came at around 20 minutes internal from each other. No casualties here, luckily. 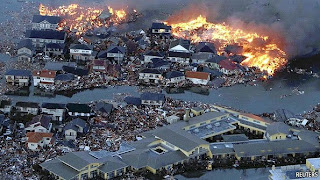 The extent of fires -- houses and buildings after the earthquake -- in the cities of Natori, Yamada, and other northern parts aside from Sendai, were bad.

Japan is a developed economy. Its severely affected cities should be able to recover soon. Its government, despite its heavy public debt, is expected to pour additional resources to rebuild damaged infrastructures. But it is Japan's private sector and innovative culture that will rebuild the damaged places.
Posted by Bienvenido Oplas Jr at 6:37 PM