Aside from huge spending on the wars in Iraq and Afghanistan, other military expenditures, the US government is spending a lot on various health and entitlement (welfare) programs, foremost of which are Medicare, MedicAid and Social Security.

Here is a good chart from The elephant in the room, The Economist, March 7th 2011.

By continuously living beyond their means, by continuing with the expensive welfare system even if revenues are no longer there, the US government and many of its citizens are digging further themselves into heavy indebtedness.

By brushing away personal responsibility aspect of healthcare and many other aspects of the people's lives, by insisting on more government responsibility of a nanny state, huge fiscal and financial troubles are being built up in the future.

On US fiscal irresponsibility

The BIG US government, whether headed by a Democrat or Republican administration (except perhaps during Ronald Reagan's term), just keeps piling up the public debt. The spend and spend, tax and tax, borrow and borrow policy was pursued without let up until today, until the next few years, and possibly even the next few decades. 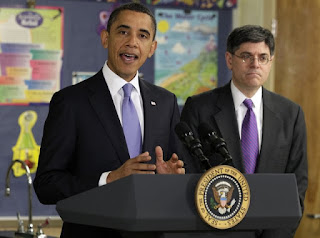 President Obama said that this year, the US public debt will rise by $2 trillion in just one year! Here's the report from the Washington Times yesterday, Debt now equals total U.S. economy. Picture of Mr. Obama and White House Budget Director Jacob Lew is also from the same news report.
By Stephen Dinan
The Washington Times
12:16 p.m., Monday, February 14, 2011

President Obama projects that the gross federal debt will top $15 trillion this year, officially equalling the size of the entire U.S. economy, and will jump to nearly $21 trillion in five years’ time.

Amid the other staggering numbers in the budget Mr. Obama sent to Congress on Monday, the debt stands out — both because Congress will need to vote to raise the debt limit later this year, and because the numbers are so large.

Mr. Obama‘s budget said 2011 will see the biggest one-year jump in debt in history, or nearly $2 trillion in a single year. And the administration says it will reach $15.476 trillion by Sept. 30, the end of the fiscal year, to reach 102.6 percent of gross domestic product (GDP) — the first time since World War II that dubious figure has been reached.

Please take note of two important facts.
1. This is federal debt only; not included here are public debt by the different states, cities and counties.
2. Also not included here are unfunded liabilities from various entitlement programs (Medicaid, Medicare, social security, etc.) which are much bigger, some estimates putting it at nearly $200 trillion in the next few years.
Here's another report from the NYT yesterday, Obama Budget Reflects a Cut-and-Invest Agenda

Annual deficits through fiscal year 2021 will add a combined $7.2 trillion to the federal debt, Mr. Obama’s budget indicates — after allowing for $1.1 trillion in deficit-reducing cuts in spending and increases in taxes over 10 years that the president proposes. After 2021, an aging population and rising medical costs will once again drive deficits to unsustainable heights unless there are further changes in spending and taxes, he acknowledges.

While the federal budget would total $3.7 trillion for 2012, much of that spending is accounted for by fast-growing programs — Medicare, Medicaid and Social Security — that are essentially on autopilot unless Mr. Obama and Congress change them, as both parties say they must. It also includes a big item that cannot be cut without reining in the overall deficit: interest on the mounting federal debt.

Fiscal irresponsibility, living beyond one's means, has one sure result: ever rising debt, which raises the annual interest payment, which reduces available fund for certain social and economic services, which necessitates more borrowings, which bloats the public debt further, and so on.
The solution to ever rising debt is an ever-rising cut in spending, period. Live within one's means, or suffer the economic distortion and malady of taxing your people more to pay an ever-rising debt and interest payment.
------
Posted by Bienvenido Oplas Jr at 2:31 PM

Where would you place the 10-year Bush tax cuts in the deficit picture?

Hi Lardy,
Bush Jr's 10-yrs tax cut (to expire in 2012?) does not appear to be significant in the revenue bars in this graph. Revenues declined in 2003-04, then in 2007-2010. The first dip coincided with the war in Iraq while the second dip was the global financial turmoil that started from the US housing bubble burst.