I've been blogging since late 2005 and prior to that, I've been engaged in some online debates via different yahoogroups since around 1998. The "itch" to write a book has been there since around 2007.

Then last December, a friend, Rodolfo "Ozone" Azanza, who has written already two small books like This is Your Kung-Fu: Deliberate Mindsets for the Non-Hermits, introduced me to his publisher, Central Book Supply Inc. in Quezon City. I said that I want my first book in the first month of 2011. After communicating with the publisher, I sent the final draft to them by January 11, 2011 (1-11-11). In less than 2 weeks, the book was delivered to me. Yehey! 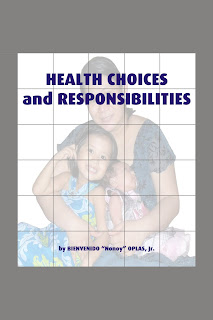 In the introduction of the book, I wrote this: Finally, I chose the title Health Choices and Responsibilities because of my two firm beliefs: One, people have control and choices in taking care of their body and mind, that there are plenty of individual choices to be healthy or be sickly, and there are many choices in financing healthcare. And two, healthcare is mainly a personal and parental responsibility, although a few health issues should fall under government responsibility.

The girls on the cover? Well, they are my wife and my two young daughters :-) I chose them to be in the cover to emphasize my point above that in order to have a healthy population, parents (or guardians) should work hard -- zero complacency or alibi -- to have healthy kids. Parents should rely on themselves, their family members and friends, and not on the government, to ensure the good health and good future of their children, or their poorer relatives' children. 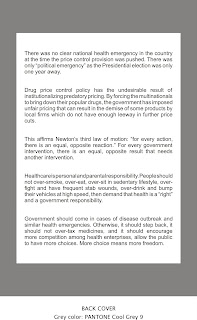 Here's a portion of the back cover: ...Drug price control policy has the undesirable result of institutionalizing predatory pricing. By forcing the multinationals to bring down their popular drugs, the government has imposed unfair pricing that can result in the demise of some products by local firms which do not have enough leeway in further price cuts.

Government should come in cases of disease outbreak and similar health emergencies. Otherwise, it should step back, it should not over-tax medicines, and it should encourage more competition among health enterprises, allow the public to have more choices. More choice means more freedom. 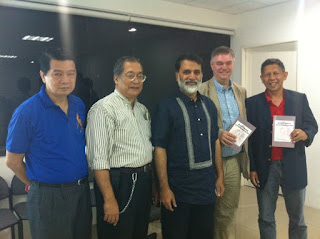 I have given away my book to a number of friends, especially to the godparents of my two kids :-), other friends in the free market movement. Like Barun Mitra (middle), founder and director of Liberty Institute in India, and Jules Maaten (beside me), resident manager of the Friedrich Naumann Foundation for LIBERTY (FNF). The others in the picture are friends from the UPSE Alumni Association, Sim Endaya and Gary Makasiar.

I kept postponing the posting of this story about my book for several weeks now. I prefer to write other topics than about my book. But then another free market friend, Paul of Colorful Rag blog, already wrote a review about my book yesterday, Review: "Health Choices and Responsibilities".

I profusely thanked him for such early plugging of my book. And mind you, I gave him my book only last Saturday night. By Monday morning, he already wrote a book review. He's the reason why I was forced to write and introduce my book here today :-)

Paul is a brutal, frank, and independent-minded free market intellectual. Though he has lots of praises about my book, he also has several punches of critique about it. Which I am really thankful.

Ohh, ok. Someone asked me, "Where can we buy your book if you don't give us a complimentary copy?"

It's available at Central Books, they have online store and a few bookstores around the country. Their main office and bookstore is in 927 Quezon Avenue, Phoenix Building, Quezon City. The building is in front of Pegasus bar I think.

Soon it will be available at www.divisoria.com too. And the UPSE cooperative store at UP School of Economics, Diliman, Quezon City, also sells it.

* Update: I've uploaded the book in scribd.com here. Thanks.
Posted by Bienvenido Oplas Jr at 10:44 AM

Thanks Luie, Cres. Sarap ng feeling when I first held my 1st book. Now I like the feelings of getting lots of greetings, haha. Now I'm more determined to produce my 2nd book on climate science and policy by middle of this year.

Hi Nonoy. I've read everything you've written in the book and I appreciate and happy you did one like this. I see there is more we can do to better the health services especially the pharmacy services in the country. There is more the public should know what and how a pharmacist can help them get the best choice of his prescribed medicines in the most cost-effective manner without jeopardizing the quality and the intended goal of therapy. We need to correct a lot of misconception that the pharmacist does nothing but sell medicines.

Thanks a lot Leonie. I should be researching more on the major functions of pharmacists aside from selling medicines.