(Note: this is my article today in the lobbyist.biz, Double price control and acronym politics)

Politicians tend to be as populist as possible just to get votes again and again. The usual practice is to create various welfare and subsidy programs to be funded either by existing taxes or new borrowings and hence, future high taxes.

But there is another way by which politicians can achieve their goal without directly compromising taxpayers’ pockets. And that is by forcing private companies to provide mandatory discounts or forcible price cuts. And whatever revenue reductions if not losses, are not necessarily deductible as tax credits. 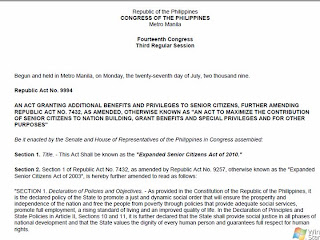 The second price control is the mandatory 50 percent price cut for selected medicines (all are products by the multinationals, not a single drug produced by local pharma). This was implemented since mid-August 2009. 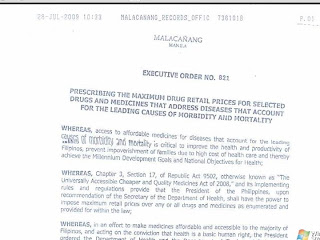 The latter is “easier” to implement because the price cut is limited to a few identified drugs and it applies to all consumers, young and old, who buy those medicines. No ID or physician prescription and other papers will be sought by the drugstores. The prices of drugs covered by the list are simply slashed by 50 percent of their previous prices, no questions asked.

The former, the mandatory price cut of 20 percent for drugs purchased by SCs, is a lot more complicated and harder to implement. To avail of rebates from the drug manufacturers and the BIR (for the VAT deductions), drugstores need to present these data about each and every single SC who buys from them: SC full name, age, address, SC ID number, drugs purchased record, physician prescription, drugs purchased at the store, how much, etc.

Only a few of the small drugstores have copying machines to photocopy those information. If they buy that machine, that will be another operating cost, plus their maintenance and electricity consumption, even if the drugstores are losing money from those mandatory discounts.

One negative effect of this revenue loss and complex compliance procedures, is that many small drugstores have stopped selling the drugs that many SCs purchase more often. And this adversely affects access. Even if the drugs for the SCs have been slashed (20% + 50%) but if they are not available, then the social goal of having “affordable, available drugs” is immediately not met and defeated.

The complex compliance procedures in implementing the mandatory price discounts for SCs is among the topics that were discussed during the meeting of the DOH Advisory Council on Healthcare early this week. I am a member of this Council since 2009. It used to be the Advisory Council on Price Regulation. After the price control has been implemented and pharma players, both multinationals and locals, have learned to live with the policy as there are no signals from the government to pull out the policy, the Council has been converted and renamed as Advisory Council on Healthcare. The focus of the meetings is how to attain “universal health care” or UHC for many Filipinos.

In another topic of the meeting, on monitoring the implementation of the mandatory 50 percent discount for selected drugs, I spoke to question the continued use of Government Mediated Access Price (GMAP) and Maximum Drug Retail Price (MDRP) because these terms and concepts are not found in the law (RA 9502) and its implementing rules and regulations (IRR). Thus, I consider these terms as technically illegal. 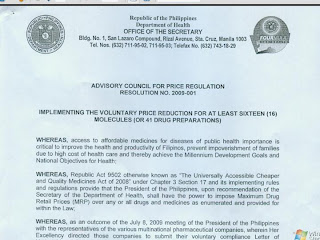 GMAP simply means Gloria Macapagal Arroyo Price when Gloria was still the President of the country at the time the 2nd drug price control policy was imposed in mid-August 2009. It was coined by the DTI and DOH leadership at that time.

The official term in the law and its IRR is Maximum Retail Price or MRP, not MDRP. But the Gloria boys then did not want to associate the policy to former Sen. Mar Roxas, who was then the Chairman of the Senate Oversight Committee on the implementation of RA 9502, the Presidential Candidate of the Liberal Party, and a constant critique of Gloria. So the Gloria boys did not want MRP to mean “Mar Roxas for President”, so they inserted “drug” to make it MDRP.

I added that these two terms, GMAP and MDRP, are not only technically illegal, but their continued use until today speaks of the heavily politicized nature of drug pricing in the country. Even if the politicians who orchestrated their acronyms and political connotations are no longer in power. Thus, I suggested that the DOH and other players should stop using those GMAP and MDRP. Use instead the one that is officially in the law, which is MRP.

I was glad that the other members of the Council did not object to my proposal, including the top DOH officials in the room.

Healthcare policies by the government are already political by nature. It is something that even free marketers like me already recognize. We only request that the extent of politicization be kept to the minimum.

Where there is less government intervention in pricing and supply of health services, there is more leeway for the various players in the health sector – pharma manufacturers, drugstores, hospitals, physicians, pharmacists and other health professionals – to adjust to the various characteristics of the patients and the public.
-----

See related articles in this blog,

Drug price control 1
Posted by Bienvenido Oplas Jr at 11:19 AM