A friend from one of my discussion yahoogroups reacted to my earlier paper, MDGs, taxes and PIDS. One of her points is if we can get support for a move to cut income taxes combined with an increase in the VAT.

I said that Dr. Philip Medalla, former NEDA chief, former UPSE Dean, and a known economist in the country, spoke a few weeks ago at the Bangko Sentral ng Pilipinas (BSP) during the BSP-UP Annual professorial lectures. He talked about public finance issues and floated the idea of "new taxes" as among the possible inevitable measures that the current administration will have to take.

Of course I stood up during the open forum to say that raising currently high and multiple taxes is among the most reprehensible measures to do. Consider this: people pay lots of income tax (especially the fixed income earners) and consumption-based taxes like VAT, excise tax, documentary stamp tax, vehicle registration tax, real property tax, etc. These are to pay for public education, public healthcare, public housing, public works, peace and order, etc.

Click on these two tables below to get larger images. Source is DBM, Budget of Expenditures and Sources of Financing 2011. 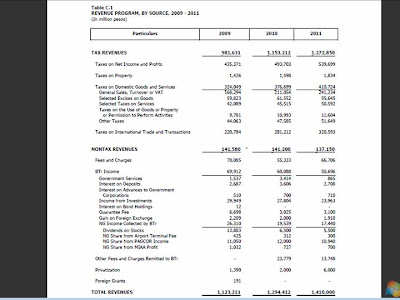 So there are lots of implicit taxes that many people already pay. When you say that they should pay more to the government in the form of higher or new taxes, that's bleeding them dry further.

So I said that we should instead cut income tax as the law on income tax is a joke, a huge hypocrisy. Many rich people, professionals, businessmen, criminals, prostitutes, foreign aid people, do not pay income tax. Only the fixed income earners are slapped with such hypocritical law. 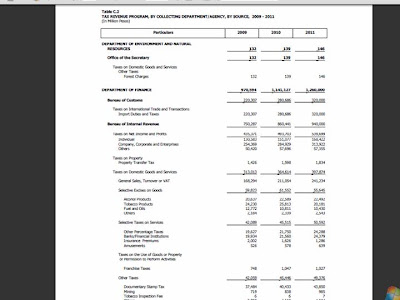 Then I also asked him that sometime 2 years ago, he, Dr. Ben Diokno (former DBM Secretary) and Dr. Canlas (also former NEDA chief), proposed to cut income tax (personal and corporate) to a flat 18% and raise VAT to 15%, I said that it's a move that I will personally support. Dr. Medalla answered that they indeed floated it, but the legislators shot down the idea and it is difficult to propose measures which have explicit disapproval by the legislators.

A "Cut income tax movement" can be launched on this issue. One sensitivity or elasticity to consider when we drastically cut income tax to a flat 10 to 18 percent (both personal and corporate) is the huge volume of local entrepreneurs and foreign investors who will come in and/or retain their money here. Anywhere in the rich world, taxes are high because of their very expensive welfare system and huge public debt, many companies there are wondering where they can jump ship, possibly to Asia.

Hong Kong and Singapore have 16 percent flat rate income tax, I think. These 2 are on tax competition always. Manila is between HK and Singapore; if we have a 10 to 18 percent income tax, many businesses will consider the Philippines, all other things being equal (ceteris paribus).

Many fixed income earners, including ordinary government employees and officials, will be happy to surrender just 10 to 18 percent instead of 25 to 32%, of their monthly income.

A 15% VAT, should it be raised, will capture more money from corupt government officials, criminals, prostitutes, tax-dodging businessmen and professionals, high-paying foreign aid guys. All of them pay zero or little income tax, the VAT system will capture their spending, so DOF, Malacanang and Congress will be happy.

If there are plenty of professionals and businessmen, big and small, who will propose the "cut income tax, raise VAT" movement, I think it will be a good campaign. People hide their income but they flaunt their consumption. They boast their new dress, new cp, new laptop or ipad, new car, eating at fancy restos -- all of which can be easily captured by VAT.
Posted by Bienvenido Oplas Jr at 2:01 PM