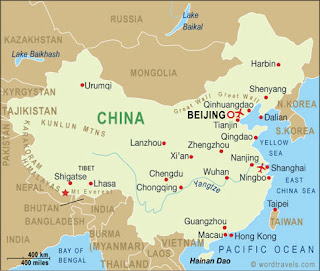 Its geography is conducive to fast economic growth, having common borders with about 13 other countries including Russia and India, and a big part of the country is facing the Pacific Ocean, Korea and Japan, where huge amount of international trade is whizzing everyday. 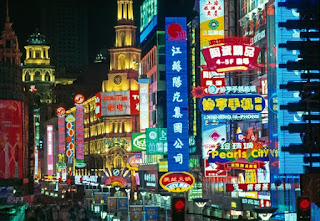 Fast economic growth means more goods and services are produced and traded, more jobs are created, and more people are lifted from poverty. This is good for a country with more than 1.3 billion people and several hundred million people in rural and mountainous areas are poor.

But fast growth can also mean higher inflationary pressure as richer people tend to buy more goods and services. As average income rises, inflation rises in step, if not at a higher proportion. And when inflation does kick in, it is the poorer segments of society who are more disadvantaged. 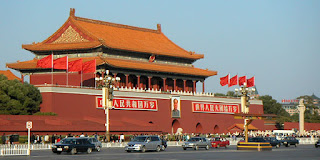 Lately, the government in Beijing has become more politically insecure and more intolerant to dissent as the wave of democratization movement is gaining momentum in the Middle East and north Africa.

A one-party state and Communist Party-monopolized political system will always be intolerant to critical citizens movement. Big Brother states and central planning thinking are allergic to spontaneous orders and initiatives, unplanned and non-centralized movements by the people, especially political ones. 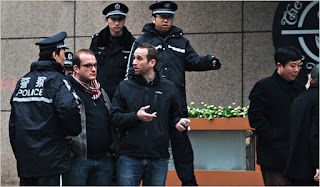 The Chinese government has recently been cracking down on foreign media who cover or attempt to cover implicit protests by some citizens against their Big Brother administrators. A picture here (from NYT) of detained foreign reporters who were rounded up by the Chinese police in Shanghai.

It's pathetic that blogger (or blogspot.com like this blog), facebook, youtube and other social media sites and blogs are banned in China. Now it's more pathetic that foreign reporters, especially those from the west, are being harassed if not outrightly beaten and arrested if they report even on minor citizens' movement. 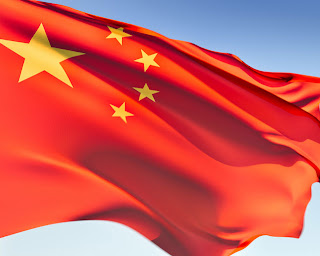 There you go. A police state is becoming more micro-manager with an increase in the number of spies and other non-productive workers. Having many spies and other government bureaucracies contribute to inflationary pressure. How and why?

Inflation or price increases happen when demand for certain goods and services is higher than supply. When there are more food supplied than what consumers can eat, food prices will decline (deflation). When there are many non-productive people like those who only issue new directives, intervention, regulations and taxation, prices are expected to rise as the cost of business taxes and compliance will go up. Of course we assume here that the monetary authorities or central bankers, the central planners of monetary policy, will not intervene heavily to influence an inflationary or deflationary policy.

There have been a number of reports saying that inflationary pressure is building up in China's economy. Graph source is Leaning to like inflation, The Economist, Feb. 17th 2011.

The fast economic growth over the past 2 to 3 decades, plus the ever-rising bureaucracy in China's Big Brother state, contribute to such pressure. As inflation will cause more misery to more poor people, the state will hire more policemen, spies and jailers, which might imply that it will tax the people more to sustain those huge and expanding bureaucracies. And a vicious cycle will continue until the state will be inviting even bigger public dissatisfaction and political dissent.

This graph shows that while nominal spending by the Chinese military is rising, its share as percentage of GDP remains stable at 2 percent over the past decade. Graph source is The fourth modernisation, The Economist, Dec. 2nd 2010.

The shift in spending by the Chinese government from external to internal defense signifies that it views internal discontent as a growing and more dangerous threat to the Communist Party, than say a confrontation with the US over Taiwan, Korea, etc.

High militarization, more police and spy state, the Chinese government will be creating more enemies among its people with this behavior.

Yup. As I said here, China's biggest problem is that it is a dictatorship.

When supply of money increases, as is being done in China and elsewhere, the demand and purchasing power of each specific unit of money decreases, making possible continuous price increases.

It is not the case in China that supply is not meeting demand for specific goods, since output continues to increase at present. A monetary aspect is involved, and this principle is quite established by the likes of Milton Friedman.

Central banks' role could not be ignored; with a stable amount of money supply, the rise of prices in one industry means a decrease elsewhere, and would be a mere manifestation of individual preferences (leaving aside other government interventions).

Thanks Carlos, Paul. I did not tackle the monetary aspect of inflation in the above discussion. I actually wanted to focus only on the rise in budget for police and spies in China in relation to the crackdown in foreign media and local protests.

I should write on central planning in monetary policy, aka central banking, in the future.