Unrest in MidEast-Africa 6: Should US jets enter Libya? 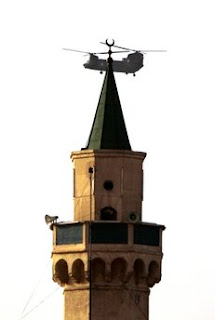 Military choppers like this one, are among the lethal engines use by Gaddafi in mowing down and killing his people who rebel against him. Rebel ground troops will be no match if the bullets and bombs are coming from the sky.

A few planes and choppers may also be on the rebel side brought by defecting soldiers, but they were not (yet) used against Gaddafi's planes and choppers. A few anti-air guns by the rebel forces were pictured in the news. The rebels therefore, would be aided if Gaddafi's airpower will be neutralized and terrorized from some outside forces.

Btway, all of these pictures here I got from yahoo news.

Bombs that produce this huge crater should be lethal enough to kill more rebel soldiers and civilians.

Thus, the loud pressure for the US and other European military powers to bring in their fighter jets at least and impose a "no fly zone" against Gaddafi's choppers and airplanes. 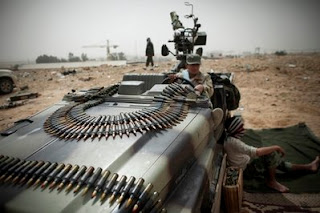 Rebels' armaments like this can help repulse ground attacks only, not air assaults.

Is the US ready to face another war in the Muslim world, aside from continued military presence in Iraq and Afghanistan, and some forces stationed in Saudi Arabia, Pakistan and elsewhere? 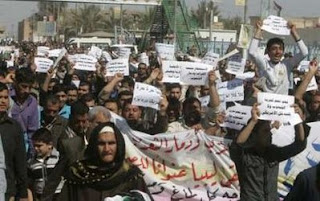 Some demonstrators in Iraq, supporters of anti-US leader, Moqtada al-Sadr, opposing planned US jets to impose "no fly zone" in Libya.

I am no military analyst so I cannot expound much on this subject. My beef is how BIG governments trap people into endless conflict and carnage. A dictatorship in Libya and other parts of Middle East and North Africa (MENA) supported by BIG governments of the US and Europe who did not raise much howl on human rights violations issue, so long as they get their oil from that oil-exporting country.

As I earlier pointed out in Libya succession, the big challenge for Libya and MENA countries undergoing political upheavals, is how the rule of law will be institutionalized. It should not just be a change of leadership from a dictatorship to another BIG government which does not learn to respect individual freedom so long as the new adminstration get the backing and support of BIG governments of the US and Europe, in exchange for continued supply of oil for their countries.
Posted by Bienvenido Oplas Jr at 4:57 PM