As I expected, zero reply from them. I assume they are super-busy telling people to switch off their lights this coming Saturday night so that they can help "save the planet." But for me, absence of reply for serious critic of their major programs is lousy. And would signal cowardice to debates.


... I also gave a talk last November 2009 at the Rotary Club of Makati Dasmarinas, and the organizers asked me to be a reactor to the head of WWF, Mr. Lory Tan, who will be their speaker the next week. I said "go-go-go." But a few days before his talk, I was advised not to come because it might cause "divisiveness" in the club. I think it was a diplomatic way of saying that Mr. Tan does not want a debate, Like Al Gore, like IPCC head Pachauri, like Leonardo di Caprio, etc.

This year is an unfortunate year for the warming alarmists and Earth savers. Global temperatures remain in the negative temperature, like the global sea surface temperature (SST). Data as of March 17, 2011, from Dr. Roy Spencer's Global SST Update Through Mid-March 2011

The Philippine government's weather bureau, PAGASA, advised that This time, expect a cooler summer. "Robert Sawi, PAGASA chief forecaster, Sunday said he expected the summer months this year to be “cooler” than last year due to the La Niña weather phenomenon." 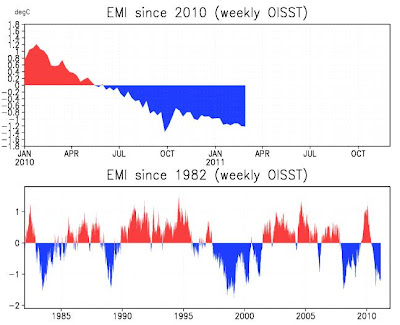 Based on the latest ensemble forecast for Nino 3.4 region, the answer is NO. While La Nina is projected to end around June this year, the rise will be a weak one, up to about +0.3 C until the end of the year, versus the -1.5 C temperature anomaly the past few months. Data is from the same WUWT ENSO page above.

Now here's another measurement and projections for the current La Nina, from the Earth System Research Laboratory (ESRL) of NOAA. 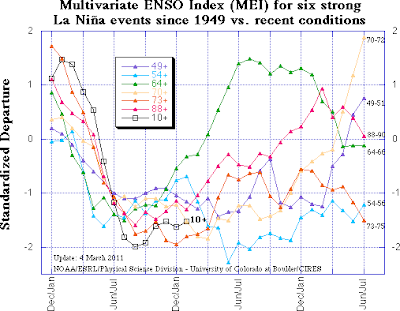 The answer to the above question is a more definite NO. The graph shows the Multivariate Enso Index (MEI).

NOAA projects a "well above 50%" chance that La Nina will continue until next year. The black line represents the current La Nina, and it's still in the -1.5 C colder than normal. The NOAA paper noted that "During the next few months, the MEI may very well stay stronger than Niño 3.4 since the latter is not normalized to account for weaker variability during this time of year."

So this coming Saturday, another lunatic campaign called "Earth Hour to save the planet" will be staged to keep scaring and fooling the public of a "catastrophic anthropogenic global warming" (CAGW) and its cousin, "man-made climate change."

The above EMI graph shows that the Earth's climate is in a pure, simple, natural cycle of warming-cooling-warming-cooling. But some nuts keep telling us that there was only "unprecedented warming" in the past and "unequivocal warming" into the future.

Keep scaring and fooling the public so they get lots of donations and funding. Yeah, right.
Posted by Bienvenido Oplas Jr at 6:54 PM

Of course, it could be that the WWF gets a ton of mail from climate-change denying cranks and can't be bothered wasting its time with them.

Yeah, those graphs that I presented above, of the planet's warming-cooling-warming-cooling climate cycle don't exist. There is only unprecedented warming, there is only unequivocal warming. So the WWF and other warming fanatics can afford to duck and avoid all challenges to a public debate. All dictators and big governments do that anywhere.