Waging a war is not only to protect existing interests, like the lives of ordinary civilians being massacred by threatened dictators and monarchs, oil and business interests in a country undergoing bloody civil war, etc.

Waging a war is also to protect or secure future interests, like whoever helped the new victors (and current rebels) will get special business deals and huge contracts at large scale economic reconstruction in the future.

This scenario is slowly shaping up among a number of leaders of European countries who have sent their fighter jets, battle ships and submarines to Libya to bomb certain military targets of the 42-years in power Libyan dictator Muammar Gadhafi. That's how one report from The Globe and Mail, Libya's economic war rages in southern Europe has painted. 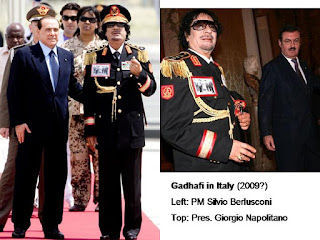 According to that report by Eric Reguly:
"Italy, Libya’s biggest European investor, is at the centre of the economic war. On Monday Italian foreign minister Franco Frattini threatened to deny the allied forces access to Italian airbases unless command of the operation were shifted to NATO. At the moment, the French, British and Americans are calling the shots...

(2 pictures below: in happy-friendly times, Gadhafi with UK's PM Brown; and with France Pres. Sarkozy, below) 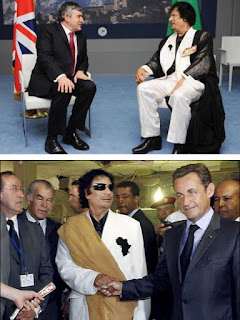 "Why does Italy cherish a NATO takeover? Because the Italians do not want the Libyan rebels seeing the air war as largely an Anglo-French effort. Italy fears that, should the rebels succeed in overthrowing Moammar Gadhafi’s regime, they will repay the British and the French by giving them the most valued reconstruction and oil projects. If NATO takes control, Britain and France’s influence over rebel loyalties would be diluted, putting Italy on a more equal footing for the post-war reconstruction spoils, whenever that may come.

"France has been resisting transferring military control to NATO. On Wednesday, however, France softened its position. It appears NATO will take over..." 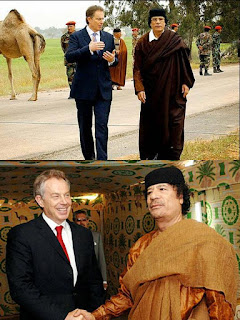 "Italy, which ruled Libya as a colony for 30 years, until the Second World War, is especially worried about France muscling into the Libyan economy. Italy considers Libya part of its economic landscape. Eni, the Italian national oil company, and Europe’s fourth largest oil player, is the biggest investor in Libya. Before the war started, Eni was pumping about 250,000 barrels a day of Libyan oil, most of which went to Europe. Last year, according to Morgan Stanley research, 32 per cent of Libyan oil exports went to Italy (France, Germany and Spain were the other largest importers).

"But French oil giant Total is also on the ground in Libya; it pumped about 50,000 barrels a day until the war virtually eliminated exports. Italy would go into a rage if the rebel forces, should they overthrow Ghadafi, were to reward Total with lavish oil concessions and investment opportunities in other projects, like highway construction, that the Italians consider their right." 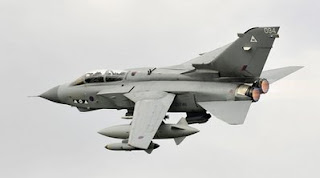 As the bombings continue in Libya, I was also thinking that when most of Gadhafi's radars, fighter jets and choppers, bombs and tanks have been charred, and Gadhafi himself is thrown out of power, the next administration will also buy new radars, new fighter jets and choppers, new bombs and tanks, from the same countries who crippled and destroyed these military hardwares of Libya.

Paying those new military spending will not be a problem for Libya or other oil-exporting countries that currently undergo political turmoil. They will not need foreign aid and loans from the west, they have lots of oil to sell.

Since the current rebels are fighting for political democratization and not individual liberty, should they win someday, the profligate lifestyle of having modern army, air force and navy will most likely be continued, if not expanded. There is something that projects a "macho" image for leaders of countries to have those lethal machines and bombs to display during their "national day" or "independence day" or similar events. Whether these countries are under dictatorship, absolute monarchy, or democracy.

Huge military spending are wasteful and a display of non-productive use of the citizens' money or a country's natural resources. Business cronyism is also a display of wasteful and inefficient economic policy.