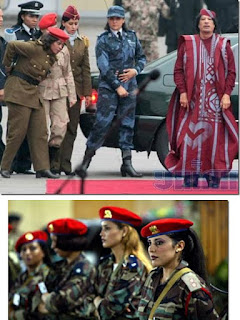 As Mr. Gadhafi ("Gaddafi", "Qadhafi", "Khadafy",...) kills more of his countrymen just to hang on to power, I don't know if he is really using his vaunted female bodyguards to protect him and his family.

In many of his foreign trips and sorties, he used to boast and parade his female bodyguards, he claimed to be "virgin warriors".

So that aside from his eccentric clothing, he also has that eccentric security measures. Or possibly some of those ladies have double work as his security aides and bed partners at the same time? 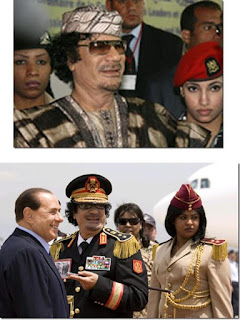 The usual disclaimer: all these pictures I got from the web, various sources.

Perhaps there are male bodyguards in plainclothes nearby. The female soldiers are more to further spruce up his unique and eccentric clothing. Similar to band instrument players who perk up the appearance of the band's lead singer. 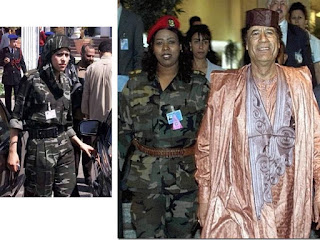 Some reports said that these female bodyguards are "trained to kill". Most likely.

He's got chubby and shapely bodyguards, dark and white skinned. And no specific uniforms too. 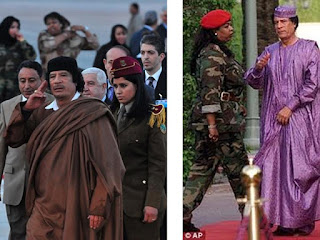 This female bodyguard on the right is big and tall enough to tackle any male attacker. 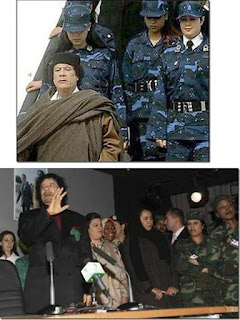 And still more female soldiers. These are young ladies yet. 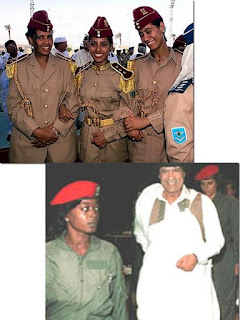